<<
Firewalling to Protect Systems and Networks

How do we select a CPU scheduling algorithm for a particular system?

There are many scheduling algorithms, each with its own parameters. As a result, selecting an algorithm can be difficult. The first problem is defining the criteria to be used in selecting an algorithm. Criteria are often defined in terms of CPU utilization, response time, or throughput. To select an algorithm, we must first define the relative importance of these measures. Our criteria may include several measures, such as: 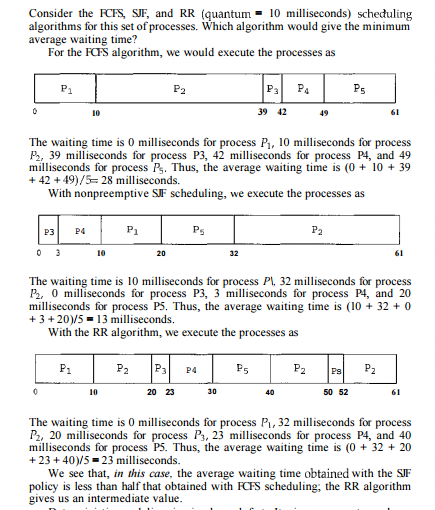 In cases where we are running the same program over and over again and can measure the program's processing requirements exactly, we may be able to use deterministic modeling to select a scheduling algorithm. Furthermore, over a set of examples, deterministic modeling may indicate trends that can then be analyzed and proved separately.

For example, it can be shown that, for the environment described (all processes and their times available at time 0), the SJF policy will always result in the minimum waiting time.

On many systems, the processes that are run vary from day to day, so there is no static set of processes (or times) to use for deterministic modeling. What can be determined, however, is the distribution of CPU and I/O bursts. These distributions can be measured and then approximated or simply estimated. The result is a mathematical formula describing the probability of a particular CPU burst. Commonly, this distribution is exponential and is described by its mean. Similarly, we can describe the distribution of times when processes arrive in the system (the arrival-time distribution). From these two distributions, it is possible to compute the average throughput, utilization, waiting time, and so on for most algorithms. The computer system is described as a network of servers.

Each server has a queue of waiting processes. The CPU is a server with its ready queue, as is the I/O system with its device queues. Knowing arrival rates and service rates, we can compute utilization, average queue length, average wait time, and so on. This area of study is called queueing-network analysis. As an example, let n be the average queue length (excluding the process being serviced), let W be the average waiting time in the queue, and let X be the average arrival rate for new processes in the queue (such as three processes per second).

We expect that during the time W that a process waits, \ x W new processes will arrive in the queue. If the system is in a steady state, then the number of processes leaving the queue must be equal to the number of processes that arrive. Thus, This equation, known as Little's formula, is particularly useful because it is valid for any scheduling algorithm and arrival distribution. We can use Little's formula to compute one of the three variables, if we know the other two.

For example, if we know that 7 processes arrive every second (on average), and that there are normally 14 processes in the queue, then we can compute the average waiting time per process as 2 seconds. Queueing analysis can be useful in comparing scheduling algorithms, but it also has limitations. At the moment, the classes of algorithms and distributions that can be handled are fairly limited.

The mathematics of complicated algorithms and distributions can be difficult to work with. Thus, arrival and service distributions are often defined in mathematically tractable —but unrealistic—ways. It is also generally necessary to make a number of independent assumptions, which may not be accurate. As a result of these difficulties, queueing models are often only approximations of real systems, and the accuracy of the computed results may be questionable.

To get a more accurate evaluation of scheduling algorithms, we can use simulations. Running simulations involves programming a model of the computer system. Software data structures represent the major components of the system. The simulator has a variable representing a clock; as this variable's value is increased, the simulator modifies the system state to reflect the activities of the devices, the processes, and the scheduler. As the simulation executes, statistics that indicate algorithm performance are gathered and printed. The data to drive the simulation can be generated in several ways. The most common method uses a random-number generator, which is programmed to generate processes, CPU burst times, arrivals, departures, and so on, according to probability distributions.

To correct this problem, we can use trace tapes. We create a trace tape by monitoring the real system and recording the sequence of actual events (Figure 5.15). We then use this sequence to drive the simulation. Trace tapes provide an excellent way to compare two algorithms on exactly the same set of real inputs. This method can produce accurate results for its inputs.

Simulations can be expensive, often requiring hours of computer time. A more detailed simulation provides more accurate results, but it also requires more computer time. In addition, trace tapes can require large amounts of storage space. Finally, the design, coding, and debugging of the simulator can be a major task.

Implementation Even a simulation is of limited accuracy. The only completely accurate way to evaluate a scheduling algorithm is to code it up, put it in the operating system, and see how it works. This approach puts the actual algorithm in the real system for evaluation under real operating conditions. The major difficulty with this approach is the high cost.

If a process did not input or output to the terminal in a 1-second interval, the process was classified as noninteractive and was moved to a lower-priority queue. In response to this policy, one programmer modified his programs to write an arbitrary character to the terminal at regular intervals of less than 1 second. The system gave his programs a high priority, even though the terminal output was completely meaningless. The most flexible scheduling algorithms are those that can be altered by the system managers or by the users so that they can be tuned for a specific application or set of applications. For instance, a workstation that performs high-end graphical applications may have scheduling needs different from those of a web server or file server.

Some operating systems— particularly several versions of UNIX—allow the system manager to fine-tune the scheduling parameters for a particular system configuration. For example, Solaris provides the dispadmin command to allow the system administrator to modify the parameters of the scheduling classes . Another approach is to use APIs that modify the priority of a process or thread. The Java, /POSIX, and /WinAPI/ provide such functions. The downfall of this approach is that performance tuning a system or application most often does not result in improved performance in more general situations.