Many applications of digital computers require the handling of data that consist not only of numbers, but also of the letters of the alphabet and certain special characters.An alphanumeric character set is a set of elements that includes the 10 decimal digits, the 26 letters of the alphabet and a number of special characters, such as $, + , and =. Such a set contains between 32 and 64 elements (if only uppercase letters are included) or between 64 and 128 (if both uppercase and lowercase letters are included). In the first case, the binary code will require six bits and in the second case, seven bits. The standard alphanumeric binary code is the ASCII (American Standard Code for Information Interchange), which uses seven bits to code 128 characters. The binary code for the uppercase letters, the decimal digits, and a few special characters is listed in Table 3-4. Note that the decimal digits in ASCII can be converted to BCD by removing the three high-order bits, 011. A complete list of ASCII characters is provided in Table 11-1. 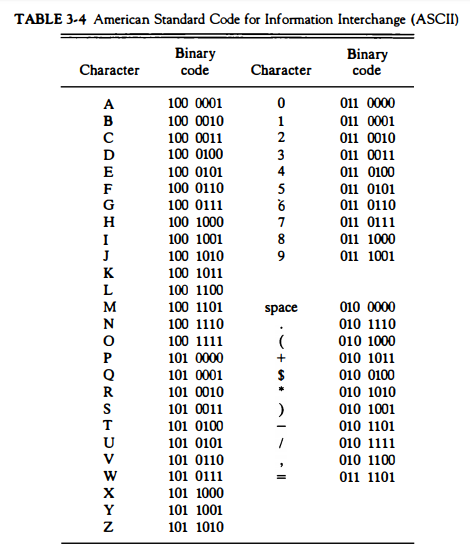 Binary codes play an important part in digital computer operations. The codes must be in binary because registers can only hold binary information. One must realize that binary codes merely change the symbols, not the meaning of the discrete elements they represent. The operations specified for digital computers must take into consideration the meaning of the bits stored in registers so that operations are performed on operands of the same type. In inspecting the bits of a computer register at random, one is likely to find that it represents some type of coded information rather than a binary number.

presents some type of coded information rather than a binary number. Binary codes can be formulated for any set of discrete elements such as the musical notes and chess pieces and their positions on the chessboard. Binary codes are also used to formulate instructions that specify control infor· mation for the computer. This chapter is concerned with data representation. Instruction codes are discussed in Chap. 5.

+
Ans: The binary number system is the most natural system for a computer, but people are accustomed to the decimal system. One way to solve this conflict is to convert all input decimal numbers into binary numbers, let the computer perform all arithmetic operations in binary and then convert the binary results back to decimal for the human user to understand. view more..
+
Ans: Table 3-1 lists a few octal numbers and their representation in registers in binary-coded form. The binary code is obtained by the procedure explained above. Each octal digit is assigned a 3-bit code as specified by the entries of the first eight digits in the table view more..
+
Ans: The conversion from and to binary, octal, and hexadecimal representation plays an important part in digital computers. Since 23 = 8 and 24 = 16, each octal digit corresponds to three binary digits and each hexadecimal digit corresponds to four binary digits. view more..
+
Ans: Many applications of digital computers require the handling of data that consist not only of numbers, but also of the letters of the alphabet and certain special characters view more..
+
Ans: Complements are used in digital computers for simplifying the subtraction operation and for logical manipulation. There are two types of complements for each base r system: the r's complement and the (r - l)'s complement. view more..
+
Ans: The r's complement of an n-digit number N in base r is defined as r' - N for N * D and D for N = D. Comparing with the (r - I)'s complement, we note that the r's complement is obtained by adding I to the (r - I)'s complement since r' - N = [(r' - I) - N] + I. view more..
+
Ans: The direct method of subtraction taught in elementary schools uses the borrow concept. In this method we borrow a 1 from a higher significant position when the minuend digit is smaller than the corresponding subtrahend digit. view more..
+
Ans: Since we are dealing with unsigned numbers, there is really no way to get an unsigned result for the second example. view more..
+
Ans: Positive integers, including zero, can be represented as unsigned numbers. However, to represent negative integers, we need a notation for negative values. In ordinary arithmetic, a negative number is indicated by a minus sign and a positive number by a plus sign. view more..
+
Ans: When an integer binary number is positive, the sign is represented by 0 and the magnitude by a positive binary number. When the number is negative, the sign is represented by 1 but the rest of the number may be represented in one of three possible ways: view more..
+
Ans: The addition of two numbers in the signed-magnitude system follows the rules of ordinary arithmetic. If the signs are the same, we add the two magnitudes and give the sum the common sign. If the signs are different, we subtract the smaller magnitude from the larger and give the result the sign of the larger magnitude. view more..
+
Ans: Subtraction of two signed binary numbers when negative numbers are in 2' s complement form is very simple and can be stated as follows: Take the 2's complement of the subtrahend (including the sign bit) and add it to the minuend (including the sign bit). A carry out of the sign bit position is discarded. view more..
+
Ans: When two numbers of n digits each are added and the sum occupies n + 1 digits, we say that an overflow occurred. When the addition is performed with paper and pencil, an overflow is not a problem since there is no limit to the width of the page to write down the sum. view more..
+
Ans: An overflow condition can be detected by observing the carry into the sign bit position and the carry out of the sign bit position. If these two carries are not equal, an overflow condition is produced. view more..
+
Ans: The representation of decimal numbers in registers is a function of the binary code used to represent a decimal digit. A 4-bit decimal code requires four flip-flops for each decimal digit. view more..
+
Ans: The floating-point representation of a number has two parts. The first part represents a signed, fixed-point number called the mantissa. The second part designates the position of the decimal (or binary) point and is called the exponent. The fixed-point mantissa may be a fraction or an integer. For exam ple, the decimal number +6132.789 is represented in floating-point with a fraction and an exponent as follows: view more..
+
Ans: A floating-point number is said to be normalized if the most significant digit of the mantissa is nonzero. For example, the decimal number 350 is normalized but 00035 is not. Regardless of where the position of the radix point is assumed to be in the mantissa, the number is normalized only if its leftmost digit is nonzero. view more..
+
Ans: In previous sections we introduced the most common types of binary-coded data found in digital computers. Other binary codes for decimal numbers and alphanumeric characters are sometimes used. Digital computers also employ other binary codes for special applications. A few additional binary codes encountered in digital computers are presented in this section. view more..
Next Article >>
Complements