<<
NONRECURRING ITEMS IN THE OTHER INCOME AND EXPENSE NOTE

Management’s Discussion and Analysis of Financial Condition and Results of Operations (MD&A) is an annual and a quarterly Securities and Exchange Commission reporting requirement. Provisions of this regulation have a direct bearing on the goal of locating nonrecurring items. As part of the MD&A, the SEC requires registrants to:

Describe any unusual or infrequent events or transactions or any significant economic changes that materially affected the amount of reported income from continuing operations and, in each case, indicate the extent to which income was so affected. In addition, describe any other significant components of revenues and expenses that, in the registrant’s judgment, should be described in order to understand the registrant’s results of operations.

Complying with this regulation will require some firms to identify and discuss items that may have already been listed in other financial statements and notes. In reviewing the MD&A with a view to locating nonrecurring items, the analyst should focus on the section dealing with results of operations. Here management presents a comparison of results over the most recent three years; comparing, for example, 2001 with 2002 and 2002 with 2003 is standard.

Phillips Petroleum uses the term “special items” to describe the items in Exhibit 2.22. The reluctance to refer to these items as “nonrecurring” is understandable. Four of the seven line items include amounts in each of the three 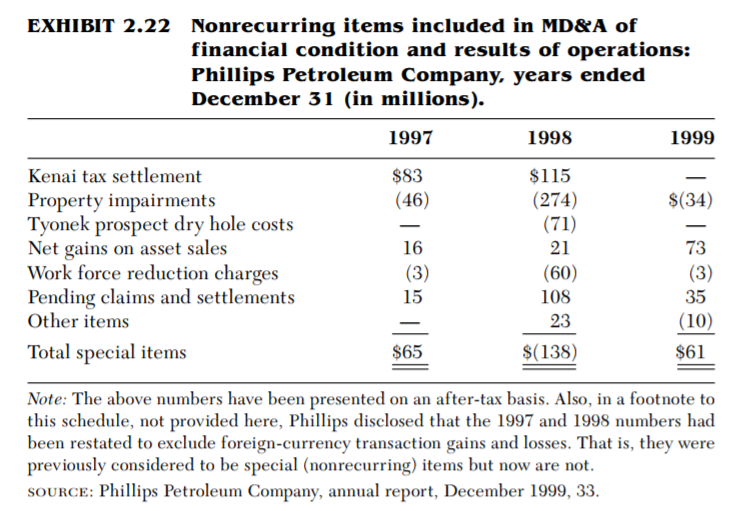 years. This might seem inconsistent with the term nonrecurring. Phillips Petroleum provides the following explanation of the special items:

While Phillips Petroleum uses special to describe what we have referred to as nonrecurring, the above description of its special items is consistent with earlier discussion in this chapter.

Phillips provided the following discussion of the effects of the information in Exhibit 2.22 on net income:

The above comments reveal a sharply lower growth in profit in 1999 after adjusting for the effects of the nonrecurring (special) items. A 157% increase in net income drops to 46% after adjustment for the nonrecurring items. Notice that the above discussion refers to the adjusted net income numbers as the “net operating income.” This is consistent with the characterization of the special items as “not representative of the company’s ongoing operations.” Nevertheless, we will continue to use the term sustainable to refer to earnings that have been adjusted for nonrecurring items.

Bard included information on revised results for each of the three years included in its 1999 annual report. The adjusted earnings-per-share series provides a better indicator of underlying trends in operating performance and is a more reliable base on which to develop projections of future earnings. The as-reported and revised earnings-per-share information is summarized in Exhibit 2.23. As is common, the adjusted earnings, from which the effects of nonrecurring items have been removed, are less volatile.

The discussion to this point has taken us through the first six steps in the nonrecurring-items search process outlined in Exhibit 2.3. The seventh and last step illustrates how additional nonrecurring items may sometimes be located in other selected notes to the financial statements.