Home >  physics >  The Motion of satellites

The Motion of satellites

Artificial satellites orbiting the earth are a familiar part of technology (Fig. 13.13). But how do they stay in orbit, and what determines the properties of their orbits? We can use Newton’s laws and the law of gravitation to provide the answers. In the next section we’ll analyze the motion of planets in the same way. 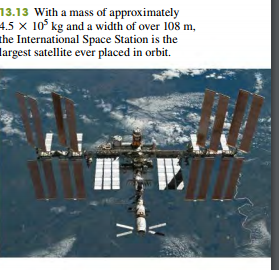 In Example 3.6 a motorcycle rider rides horizontally off the edge of a cliff, launching himself into a parabolic path that ends on the flat ground at the base of the cliff. If he survives and repeats the experiment with increased launch speed, he will land farther from the starting point. We can imagine him launching himself with great enough speed that the earth’s curvature becomes significant. As he falls, the earth curves away beneath him. If he is going fast enough, and if his launch point is high enough that he clears the mountaintops, he may be able to go right on around the earth without ever landing. 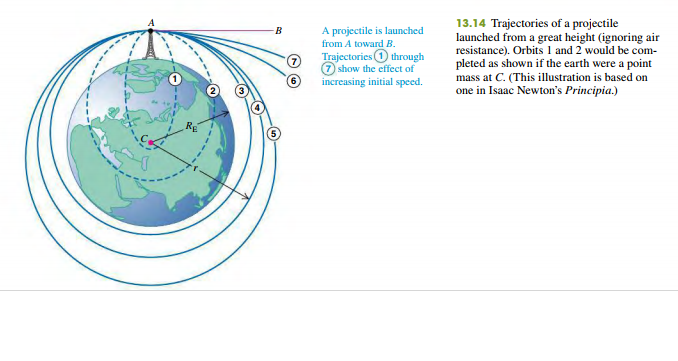 Figure 13.14 shows a variation on this theme. We launch a projectile from point A in the direction AB, tangent to the earth’s surface. Trajectories 1 through 7 show the effect of increasing the initial speed. In trajectories 3 through 5 the projectile misses the earth and becomes a satellite. If there is no retarding force such as air resistance, the projectile’s speed when it returns to point A is the same as its initial speed and it repeats its motion indefinitely.

Trajectories 1 through 5 close on themselves and are called closed orbits. All closed orbits are ellipses or segments of ellipses; trajectory 4 is a circle, a special case of an ellipse.  Trajectories 6 and 7 are open orbits. For these paths the projectile never returns to its starting point but travels ever farther away from the earth.

+
Ans: As a final note, let’s show that when we are close to the earth’s surface, Eq. (13.9) reduces to the familiar U = mgy view more..
+
Ans: When we first introduced gravitational potential energy in Section 7.1, we assumed that the earth’s gravitational force on a body of mass m doesn’t depend on the body’s height. This led to the expression U = mgy view more..
+
Ans: We defined the weight of a body in Section 4.4 as the attractive gravitational force exerted on it by the earth. We can now broaden our definition and say that the weight of a body is the total gravitational force exerted on the body by all other bodies in the universe view more..
+
Ans: Artificial satellites orbiting the earth are a familiar part of technology But how do they stay in orbit, and what determines the properties of their orbits? We can use Newton’s laws and the law of gravitation to provide the answers. In the next section we’ll analyze the motion of planets in the same way. view more..
+
Ans: A circular orbit, like trajectory 4 in Fig. 13.14, is the simplest case. It is also an important case, since many artificial satellites have nearly circular orbits and the orbits of the planets around the sun are also fairly circular view more..
+
Ans: The name planet comes from a Greek word meaning “wanderer,” and indeed the planets continuously change their positions in the sky relative to the background of stars. One of the great intellectual accomplishments of the 16th and 17th centuries was the threefold realization that the earth is also a planet, that all planets orbit the sun, and that the apparent motions of the planets as seen from the earth can be used to determine their orbits precisely view more..
+
Ans: First consider the elliptical orbits described in Kepler’s first law. Figure 13.18 shows the geometry of an ellipse. The longest dimension is the major axis, with half-length a; this half-length is called the semi-major axis. view more..
+
Ans: In a small time interval dt, the line from the sun S to the planet P turns through an angle du. The area swept out is the colored triangle with height r, base length r du, and area dA = 1 2 r2 du in . The rate at which area is swept out, view more..
+
Ans: We have already derived Kepler’s third law for the particular case of circular orbits. Equation (13.12) shows that the period of a satellite or planet in a circular orbit is proportional to the 3 2 power of the orbit radius. view more..
+
Ans: We have assumed that as a planet or comet orbits the sun, the sun remains absolutely stationary. This can’t be correct; because the sun exerts a gravitational force on the planet, the planet exerts a gravitational force on the sun of the same magnitude but opposite direction. In fact, both the sun and the planet orbit around their common center of mass view more..
+
Ans: We have stated without proof that the gravitational interaction between two spherically symmetric mass distributions is the same as though all the mass of each were concentrated at its center. Now we’re ready to prove this statement. Newton searched for a proof for several years, and he delayed publication of the law of gravitation until he found one view more..
+
Ans: We start by considering a ring on the surface of a shell , centered on the line from the center of the shell to m. We do this because all of the particles that make up the ring are the same distance s from the point mass m. view more..
+
Ans: Any spherically symmetric mass distribution can be thought of as a combination of concentric spherical shells. Because of the principle of superposition of forces, what is true of one shell is also true of the combination. So we have proved half of what we set out to prove: that the gravitational interaction between any spherically symmetric mass distribution and a point mass is the same as though all the mass of the spherically symmetric distribution were concentrated at its center. view more..
+
Ans: We assumed at the beginning that the point mass m was outside the spherical shell, so our proof is valid only when m is outside a spherically symmetric mass distribution. view more..
+
Ans: Because the earth rotates on its axis, it is not precisely an inertial frame of reference. For this reason the apparent weight of a body on earth is not precisely equal to the earth’s gravitational attraction, which we will call the true weight w 0 of the body. Figure 13.26 is a cutaway view of the earth, showing three observers. Each one holds a spring scale with a body of mass m hanging from it. view more..
+
Ans: In 1916 Albert Einstein presented his general theory of relativity, which included a new concept of the nature of gravitation. In his theory, a massive object actually changes the geometry of the space around it view more..
+
Ans: Think first about the properties of our own sun. Its mass M = 1.99 * 1030 kg and radius R = 6.96 * 108 m are much larger than those of any planet, but compared to other stars, our sun is not exceptionally massive view more..
+
Ans: The first expression for escape speed in Eq. (13.29) suggests that a body of mass M will act as a black hole if its radius R is less than or equal to a certain critical radius. view more..
Next Article >>
satellites: Circular orbits