Interpreting E, K, and U in SHM

Figure 14.14 shows the energy quantities E, K, and U at x = 0, x = ±A/2, and x = ±A. Figure 14.15 is a graphical display of Eq. (14.21); energy (kinetic, potential, and total) is plotted vertically and the coordinate x is plotted horizontally. The parabolic curve in Fig. 14.15a represents the potential energy U = 1/ 2 kx2 . The horizontal line represents the total mechanical energy E, which is constant and does not vary with x. At any value of x between -A and A, the vertical distance from the x-axis to the parabola is U; since E = K + U, the remaining vertical distance up to the horizontal line is K. Figure 14.15b shows both K and U as functions of x. The horizontal line for E intersects the potential-energy curve at x = -A and x = A, so at these points the energy is entirely potential, the kinetic energy is zero, and the body comes momentarily to rest before reversing direction. As the body oscillates between -A and A, the energy is continuously transformed from potential to kinetic and back again. 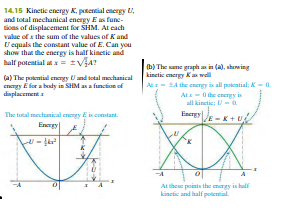