A simple pendulum is an idealized model consisting of a point mass suspended by a massless, unstretchable string. When the point mass is pulled to one side of its straight-down equilibrium position and released, it oscillates about the equilibrium position.Familiar situations such as a wrecking ball on a crane’s cable or a person on a swing (Fig. 14.21a) can be modeled as simple pendulums. 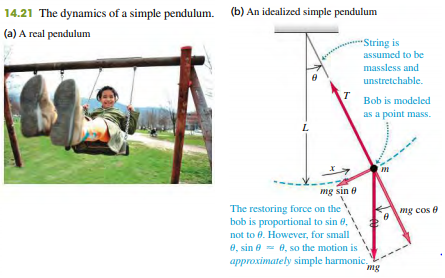 The path of the point mass (sometimes called a pendulum bob) is not a straight line but the arc of a circle with radius L equal to the length of the string (Fig. 14.21b). We use as our coordinate the distance x measured along the arc. If the motion is simple harmonic, the restoring force must be directly proportional to x or (because x = Lu) to u. Is it?

The restoring force is then proportional to the coordinate for small displacements, and the force constant is k = mg/L. From Eq. (14.10) the angular frequency v of a simple pendulum with small amplitude is

The corresponding frequency and period relationships are

These expressions don’t involve the mass of the particle. That’s because the gravitational restoring force is proportional to m, so the mass appears on both sides of gF S = ma S and cancels out. (The same physics explains why bodies of different masses fall with the same acceleration in a vacuum.) For small oscillations, the period of a pendulum for a given value of g is determined entirely by its length. 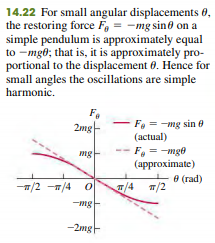 Equations (14.32) through (14.34) tell us that a long pendulum (large L) has a longer period than a shorter one. Increasing g increases the restoring force, causing the frequency to increase and the period to decrease.

The motion of a pendulum is only approximately simple harmonic. When the maximum angular displacement ? (amplitude) is not small, the departures from simple harmonic motion can be substantial. In general, the period T is given by

We can compute T to any desired degree of precision by taking enough terms in the series. You can confirm that when ? = 15°, the true period is longer than that given by the approximate Eq. (14.34) by less than 0.5%

A pendulum is a useful timekeeper because the period is very nearly independent of amplitude, provided that the amplitude is small. Thus, as a pendulum clock runs down and the amplitude of the swings decreases a little, the clock still keeps very nearly correct time.