There are two major types of control organization:

In the hardwired organization, the control logic is implemented with gates, flip-flops, decoders, and other digital circuits. It has the advantage that it can be optimized to produce a fast mode of operation. In the microprogrammed organization, the control information is stored in a control memory. The control memory is programmed to initiate the required sequence of microoperations. A hardwired control, as the name implies, requires changes in the wiring among the various components if the design has to be modified or changed.

The block diagram of the control unit is shown in Fig. 5.6.

It consists of two decoders,

An instruction read from memory is placed in the instruction register (IR).position of this register in the common bus system is indicated in Fig 5.4. 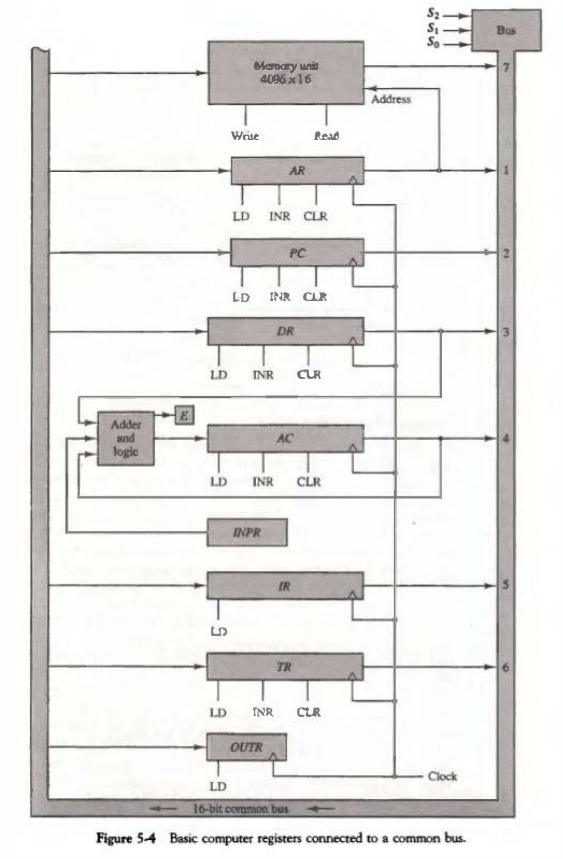 The instruction register is shown again in Fig. 5.6, where it is divided into three parts: 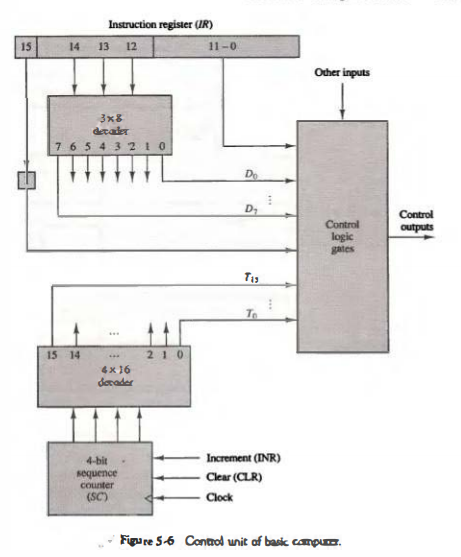 The operation code in bits 12 through 14 are decoded with a 3 x 8 decoder. The eight outputs of the decoder are designated by the symbols D0 through D7. The subscripted decimal number is equivalent to the binary value of the corresponding operation code. Bit 15 of the instruction is transferred to a flip-flop designated by the symbol I. Bits 0 through 11 are applied to the control logic gates. The 4-bit sequence counter can count in binary from 0 through 15. The outputs of the counter are decoded into 16 timing signals T0 through T15.

As an example, consider the case where SC is incremented to provide timing signals T0, T1, T2, T3, and T4 in sequence. At time T4, SC is cleared to 0 if decoder output D3 is active. This is expressed symbolically by the statement

The timing diagram of Fig. 5-7 shows the time relationship of the control signals.

The last three waveforms in Fig. 5-7 show how SC is cleared when D3T4 = 1. Output D3 from the operation decoder becomes active at the end of timing signal T2. When timing signal T4 becomes active, the output of the AND gate that implements the control function D3T4 becomes active. This signal is applied to the CLR input of SC. On the next positive clock transition (the one marked T4 in the diagram) the counter is cleared to 0. This causes the timing signal T0 to become active instead of T5 that would have been active if SC were incremented instead of cleared.

A memory read or write cycle will be initiated with the rising edge of a timing signal. It will be assumed that a memory cycle time is less than the clock cycle time. According to this assumption, a memory read or write cycle ini­ tiated by a timing signal will be completed by the time the next clock goes through its positive transition. The clock transition will then be used to load the memory word into a register. This timing relationship is not valid in many computers because the memory cycle time is usually longer than the processor clock cycle. In such a case it is necessary to provide wait cycles in the processor until the memory word is available. To facilitate the presentation, we will assume that a wait period is not necessary in the basic computer.

To fully comprehend the operation of the computer, it is crucial that one understands the timing relationship between the clock transition and the timing signals. For example, the register transfer statement

specifies a transfer of the content of PC into AR if timing signal T0 is active. T0 is active during an entire clock cycle intervaL During this time the content of PC is placed onto the bus (with S2S1S0 = 010) and the LD (load) input of AR is enabled. The actual transfer does not occur until the end of the clock cycle when the clock goes through a positive transition. This same positive clock transition increments the sequence counter SC from 0000 to 0001 . The next clock cycle has T1 active and T0 inactive.