<<
Closing Down the Project-Managing the Information Systems Project

A project manager has a wide variety of techniques available for depicting and documenting project plans. These planning documents can take the form of graphical or textual reports, although graphical reports have become most popular for depicting project plans. The most commonly used methods are Gantt charts and Network diagrams. Because Gantt charts do not show how tasks must be ordered (precedence) but simply show when a task should begin and when it should end, they are often more useful for depicting relatively simple projects or subparts of a larger project, the activities of a single worker, or for monitoring the progress of activities compared to scheduled completion dates (see Figure 3-20A). Recall that a Network diagram shows the ordering of activities by connecting a task to its predecessor and successor tasks (see Figure 3-20B). Sometimes a Network diagram is preferable; other times a

FIGURE 3-20 Graphical diagrams that depict project plans: (A) A Gantt chart, (B) A Network diagram 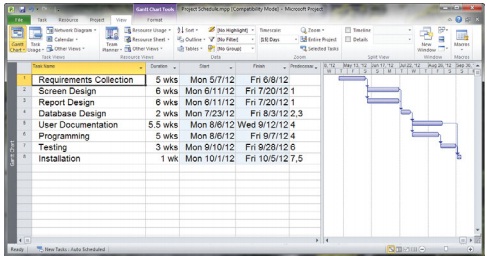 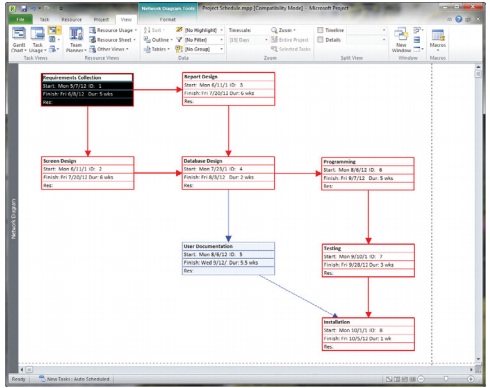 Gantt chart more easily shows certain aspects of a project. Here are the key differences between these two representations:

FIGURE 3-21 A screen from Microsoft Project for Windows summarizes all project activities, their durations in weeks, and their scheduled starting and ending dates. 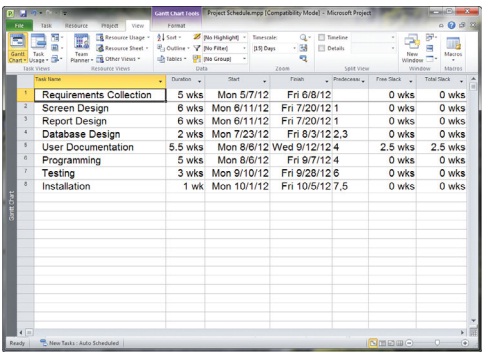 Project managers also use textual reports that depict resource utilization by tasks, complexity of the project, and cost distributions to control activities. For example, Figure 3-21 shows a screen from Microsoft Project for Windows that summarizes all project activities, their durations in weeks, and their scheduled starting and ending dates. Most project managers use computer-based systems to help develop their graphical and textual reports. Later in this chapter, we discuss these automated systems in more detail. A project manager will periodically review the status of all ongoing project task activities to assess whether the activities will be completed early, on time, or late. If early or late, the duration of the activity, depicted in column 2 of Figure 3-21, can be updated.

Once changed, the scheduled start and finish times of all subsequent tasks will also change. Making such a change will also alter a Gantt chart or Network diagram used to represent the project tasks. The ability to easily make changes to a project is a powerful feature of most project management environments. It allows the project manager to determine easily how changes in task duration affect the project completion date. It is also useful for examining the impact of “what if” scenarios for adding or reducing resources, such as personnel, for an activity.