To fully appreciate why Si, Ge, and GaAs are the semiconductors of choice for the electronics industry requires some understanding of the atomic structure of each and how the atoms are bound together to form a crystalline structure. The fundamental components of an atom are the electron, proton, and neutron. In the lattice structure, neutrons and protons form the nucleus and electrons appear in fixed orbits around the nucleus. The Bohr model for the three materials is provided below 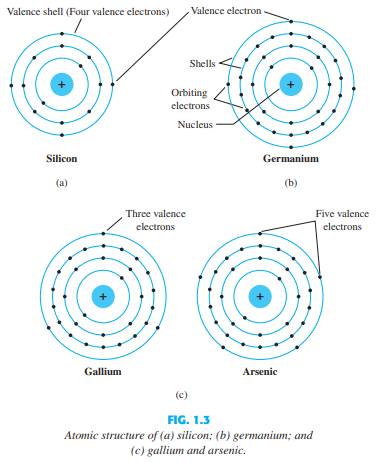 In a pure silicon or germanium crystal the four valence electrons of one atom form a bonding arrangement with four adjoining atoms, as shown in Fig. 1.4 .

“This bonding of atoms, strengthened by the sharing of electrons, is called covalent bonding. “

Because GaAs is a compound semiconductor, there is sharing between the two different atoms, as shown in Fig. 1.5 . Each atom, gallium or arsenic, is surrounded by atoms of the complementary type. There is still a sharing of electrons similar in structure to that of Ge and Si, but now five electrons are provided by the As atom and three by the Ga atom. 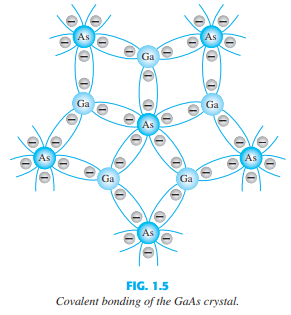 Although the covalent bond will result in a stronger bond between the valence electrons and their parent atom, it is still possible for the valence electrons to absorb sufficient kinetic energy from external natural causes to break the covalent bond and assume the “free” state. The term free is applied to any electron that has separated from the fixed lattice structure and is very sensitive to any applied electric fields such as established by voltage sources or any difference in potential. The external causes include effects such as light energy in the form of photons and thermal energy (heat) from the surrounding medium. At room temperature there are approximately 1.5 : 10 10 free carriers in 1 cm 3 of intrinsic silicon material, that is, 15,000,000,000 (15 billion) electrons in a space smaller than a small sugar cube—an enormous number.

The term intrinsic is applied to any semiconductor material that has been carefully ENERGY LEVELS 5 refined to reduce the number of impurities to a very low level—essentially as pure as can be made available through modern technology. The free electrons in a material due only to external causes are referred to as intrinsic carriers. Table 1.1compares the number of intrinsic carriers per cubic centimeter (abbreviated ni ) for Ge, Si, and GaAs. It is interesting to note that Ge has the highest number and GaAs the lowest. In fact, Ge has more than twice the number as GaAs. The number of carriers in the intrinsic form is important, but other characteristics of the material are more significant in determining its use in the field. One such factor is the relative mobility (mn ) of the free carriers in the material, that is, the ability of the free carriers to move throughout the material. Table 1.2 clearly reveals that the free carriers in GaAs have more than five times the mobility of free carriers in Si, a factor that results in response times using GaAs electronic devices that can be up to five times those of the same devices made from Si. Note also that free carriers in Ge have more than twice the mobility of electrons in Si, a factor that results in the continued use of Ge in high-speed radio frequency applications.

One of the most important technological advances of recent decades has been the ability to produce semiconductor materials of very high purity. Recall that this was one of the problems encountered in the early use of silicon—it was easier to produce germanium of the required purity levels. Impurity levels of 1 part in 10 billion are common today, with higher levels attainable for large-scale integrated circuits. One might ask whether these extremely high levels of purity are necessary. They certainly are if one considers that the addition of one part of impurity (of the proper type) per million in a wafer of silicon material can change that material from a relatively poor conductor to a good conductor of electricity. We obviously have to deal with a whole new level of comparison when we deal with the semiconductor medium. The ability to change the characteristics of a material through this process is called doping , something that germanium, silicon, and gallium arsenide readily and easily accept. The doping process is discussed in detail in Sections 1 . 5 and 1 . 6 . One important and interesting difference between semiconductors and conductors is their reaction to the application of heat. For conductors, the resistance increases with an increase in heat. This is because the numbers of carriers in a conductor do not increase significantly with temperature, but their vibration pattern about a relatively fixed location makes it increasingly difficult for a sustained flow of carriers through the material. Materials that react in this manner are said to have a positive temperature coefficient. Semiconductor materials, however, exhibit an increased level of conductivity with the application of heat. As the temperature rises, an increasing number of valence electrons absorb sufficient thermal energy to break the covalent bond and to contribute to the number of free carriers. Therefore:

Because Si is the material used most frequently as the base (substrate) material in the construction of solid-state electronic devices, the discussion to follow in this and the next few sections deals solely with Si semiconductors. Because Ge, Si, and GaAs share a similar covalent bonding, the discussion can easily be extended to include the use of the other materials in the manufacturing process.

As indicated earlier, the characteristics of a semiconductor material can be altered significantly by the addition of specific impurity atoms to the relatively pure semiconductor material. These impurities, although only added at 1 part in 10 million, can alter the band structure sufficiently to totally change the electrical properties of the material.

“A semiconductor material that has been subjected to the doping process is called an extrinsic material.”

There are two extrinsic materials of immeasureable importance to semiconductor device fabrication: n -type and p -type materials. Each is described in some detail in the following subsections.

Both n -type and p -type materials are formed by adding a predetermined number of impurity atoms to a silicon base. An n -type material is created by introducing impurity elements that have five valence electrons ( pentavalent ), such as antimony , arsenic , and phosphorus. Each is a member of a subset group of elements in the Periodic Table of Elements referred to as Group V because each has five valence electrons. The effect of such impurity elements is indicated in Fig. 1.7 (using antimony as the impurity in a silicon base). Note that the four covalent bonds are still present. There is, however, an additional fifth electron due to the impurity atom, which is unassociated with any particular covalent bond. This remaining electron, loosely bound to its parent (antimony) atom, is relatively free to move within the newly formed n -type material. Since the inserted impurity atom has donated a relatively “free” electron to the structure:

The effect of this doping process on the relative conductivity can best be described through the use of the energy-band diagram of Fig. 1.8 . Note that a discrete energy level (called the donor level) appears in the forbidden band with an E g significantly less than that of the intrinsic material. Those free electrons due to the added impurity sit at this energy level and have less difficulty absorbing a sufficient measure of thermal energy to move into the conduction band at room temperature. The result is that at room temperature, there are a large number of carriers (electrons) in the conduction level, and the conductivity of the material increases significantly. At room temperature in an intrinsic Si material there is about one free electron for every 10 12 atoms. If the dosage level is 1 in 10 million (10 7 ), the ratio 10 12>10 7 10 5 indicates that the carrier concentration has increased by a ratio of 100,000:1.

The p -type material is formed by doping a pure germanium or silicon crystal with impurity atoms having three valence electrons. The elements most frequently used for this purpose are boron , gallium , and indium . Each is a member of a subset group of elements in the Periodic Table of Elements referred to as Group III because each has three valence electrons. The effect of one of these elements, boron, on a base of silicon is indicated in Fig. 1.9 . Note that there is now an insufficient number of electrons to complete the covalent bonds of the newly formed lattice. The resulting vacancy is called a hole and is represented by a small circle or a plus sign, indicating the absence of a negative charge. Since the resulting vacancy will readily accept a free electron:

The effect of the hole on conduction is shown in Fig. 1.10 . If a valence electron acquires sufficient kinetic energy to break its covalent bond and fills the void created by a hole, then a vacancy, or hole, will be created in the covalent bond that released the electron. There is, therefore, a transfer of holes to the left and electrons to the right, as shown in Fig. 1.10 . The direction to be used in this text is that of conventional flow , which is indicated by the direction of hole flow.

In the intrinsic state, the number of free electrons in Ge or Si is due only to those few electrons in the valence band that have acquired sufficient energy from thermal or light sources to break the covalent bond or to the few impurities that could not be removed. The vacancies left behind in the covalent bonding structure represent our very limited supply of holes.

For the p -type material the number of holes far outweighs the number of electrons, as shown in Fig. 1.11b . Therefore: In a p-type material the hole is the majority carrier and the electron is the minority carrier. When the fifth electron of a donor atom leaves the parent atom, the atom remaining acquires a net positive charge: hence the plus sign in the donor-ion representation. For similar reasons, the minus sign appears in the acceptor ion.