Now that both n - and p -type materials are available, we can construct our first solid-state electronic device: The semiconductor diode , with applications too numerous to mention, is created by simply joining an n -type and a p -type material together, nothing more, just the joining of one material with a majority carrier of electrons to one with a majority carrier of holes. The basic simplicity of its construction simply reinforces the importance of the development of this solid-state era.

At the instant the two materials are “joined” the electrons and the holes in the region of the junction will combine, resulting in a lack of free carriers in the region near the junction, as shown in Fig. 1.12a . Note in Fig. 1.12a that the only particles displayed in this region are the positive and the negative ions remaining once the free carriers have been absorbed.

“This region of uncovered positive and negative ions is called the depletion region due to the “depletion” of free carriers in the region.”

If leads are connected to the ends of each material, a two-terminal device results, as shown in Figs. 1.12a and 1.12b . Three options then become available: no bias , forward bias , and reverse bias . The term bias refers to the application of an external voltage across the two terminals of the device to extract a response. The condition shown in Figs. 1.12a and 1.12b is the no-bias situation because there is no external voltage applied. It is simply a diode with two leads sitting isolated on a laboratory bench. In Fig. 1.12b the symbol for a semiconductor diode is provided to show its correspondence with the p – n junction. In each figure it is clear that the applied voltage is 0 V (no bias) and the resulting current is 0 A, much like an isolated resistor. The absence of a voltage across a resistor results in zero current through it. Even at this early point in the discussion it is important to note the polarity of the voltage across the diode in Fig. 1.12b and the direction given to the current. Those polarities will be recognized as the defined polarities for the semiconductor diode. If a voltage applied across the diode has the same polarity across the diode as in Fig. 1.12b , it will be considered a positive voltage. If the reverse, it is a negative voltage. The same standards can be applied to the defined direction of current in Fig. 1.12b . Under no-bias conditions, any minority carriers (holes) in the n -type material that find themselves within the depletion region for any reason whatsoever will pass quickly into the p -type material. The closer the minority carrier is to the junction, the greater is the attraction for the layer of negative ions and the less is the opposition offered by the positive ions in the depletion region of the n -type material. We will conclude, therefore, for future discussions, that any minority carriers of the n -type material that find themselves in the depletion region will pass directly into the p -type material. This carrier flow is indicated at the top of Fig. 1.12c for the minority carriers of each material.

A close examination of Fig. 1.12c will reveal that the relative magnitudes of the flow vectors are such that the net flow in either direction is zero. This cancellation of vectors for each type of carrier flow is indicated by the crossed lines. The length of the vector representing hole flow is drawn longer than that of electron flow to demonstrate that the two magnitudes need not be the same for cancellation and that the doping levels for each material may result in an unequal carrier flow of holes and electrons. In summary, therefore:

“In the absence of an applied bias across a semiconductor diode, the net flow of charge in one direction is zero.”

If an external potential of V volts is applied across the p – n junction such that the positive terminal is connected to the n -type material and the negative terminal is connected to the p -type material as shown in Fig. 1.13 , the number of uncovered positive ions in the depletion region of the n -type material will increase due to the large number of free electrons drawn to the positive potential of the applied voltage. For similar reasons, the number of uncovered negative ions will increase in the p -type material. The net effect, therefore, is a widening of the depletion region. This widening of the depletion region will establish too great a barrier for the majority carriers to overcome, effectively reducing the majority carrier flow to zero, as shown in Fig. 1.13a .

The number of minority carriers, however, entering the depletion region will not change, resulting in minority-carrier flow vectors of the same magnitude indicated in Fig. 1.12c with no applied voltage.

“The current that exists under reverse-bias conditions is called the reverse saturation current and is represented by I s .”

The reverse saturation current is seldom more than a few microamperes and typically in nA, except for high-power devices. The term saturation comes from the fact that it reaches its maximum level quickly and does not change significantly with increases in the reverse-bias potential, as shown on the diode characteristics of Fig. 1.15 for V D 0 V. The reverse-biased conditions are depicted in Fig. 1.13b for the diode symbol and p – n junction. Note, in particular, that the direction of I s is against the arrow of the symbol. Note also that the n egative side of the applied voltage is connected to the p -type material and the p ositive side to the n -type material, the difference in underlined letters for each region revealing a reverse-bias condition. 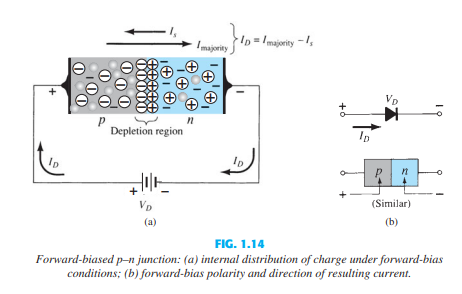 The resulting minority-carrier flow of electrons from the p -type material to the n -type material (and of holes from the n -type SEMICONDUCTOR DIODE 13 material to the p -type material) has not changed in magnitude (since the conduction level is controlled primarily by the limited number of impurities in the material), but the reduction in the width of the depletion region has resulted in a heavy majority flow across the junction. An electron of the n -type material now “sees” a reduced barrier at the junction due to the reduced depletion region and a strong attraction for the positive potential applied to the p -type material. As the applied bias increases in magnitude, the depletion region will continue to decrease in width until a flood of electrons can pass through the junction, resulting in an exponential rise in current as shown in the forward-bias region of the characteristics of Fig. 1.15 . Note that the vertical scale of Fig. 1.15 is measured in milliamperes (although some semiconductor diodes have a vertical scale measured in amperes), and the horizontal scale in the forward-bias region has a maximum of 1 V. Typically, therefore, the voltage across a forward-biased diode will be less than 1 V. Note also how quickly the current rises beyond the knee of the curve. It can be demonstrated through the use of solid-state physics that the general characteristics of a semiconductor diode can be defined by the following equation, referred to as Shockley’s equation, for the forward- and reverse-bias regions: 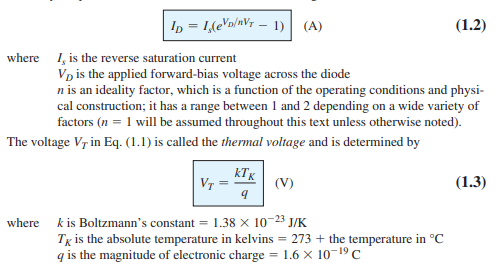 Even though the scale of Fig. 1.15 is in tens of volts in the negative region, there is a point where the application of too negative a voltage with the reverse polarity will result in a sharp change in the characteristics, as shown in Fig. 1.17 . The current increases at a very rapid rate in a direction opposite to that of the positive voltage region. The reverse-bias potential that results in this dramatic change in characteristics is called the breakdown potential and is given the label VBV . 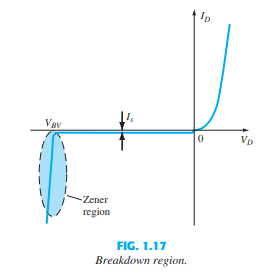 As the voltage across the diode increases in the reverse-bias region, the velocity of the minority carriers responsible for the reverse saturation current I s will also increase. Eventually, their velocity and associated kinetic energy (WK = 1/2 mv2 ) will be sufficient to release additional carriers through collisions with otherwise stable atomic structures. That is, an ionization process will result whereby valence electrons absorb sufficient energy to leave the parent atom. These additional carriers can then aid the ionization process to the point where a high avalanche current is established and the avalanche breakdown region determined.

The avalanche region ( VBV ) can be brought closer to the vertical axis by increasing the doping levels in the p - and n -type materials. However, as VBV decreases to very low levels, such as 5 V, another mechanism, called Zener breakdown , will contribute to the sharp change in the characteristic. It occurs because there is a strong electric field in the region of the junction that can disrupt the bonding forces within the atom and “generate” carriers. Although the Zener breakdown mechanism is a significant contributor only at lower levels of VBV , this sharp change in the characteristic at any level is called the Zener region , and diodes employing this unique portion of the characteristic of a p – n junction are called Zener diodes .

The breakdown region of the semiconductor diode described must be avoided if the response of a system is not to be completely altered by the sharp change in characteristics in this reverse-voltage region.

“The maximum reverse-bias potential that can be applied before entering the breakdown region is called the peak inverse voltage (referred to simply as the PIV rating) or the peak reverse voltage (denoted the PRV rating).”

If an application requires a PIV rating greater than that of a single unit, a number of diodes of the same characteristics can be connected in series. Diodes are also connected in parallel to increase the current-carrying capacity. In general, the breakdown voltage of GaAs diodes is about 10% higher those for silicon diodes but after 200% higher than levels for Ge diodes. 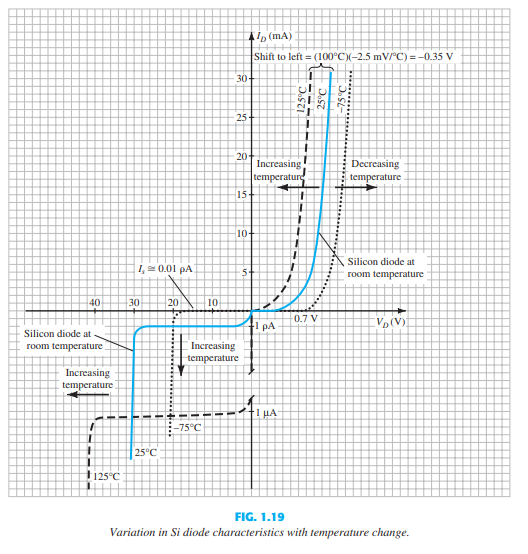 An increase from room temperature (20°C) to 100°C (the boiling point of water) results SEMICONDUCTOR DIODE 19 in a drop of 80(2.5 mV) 200 mV, or 0.2 V, which is significant on a graph scaled in tenths of volts. A decrease in temperature has the reverse effect, as also shown in the figure:

“In the reverse-bias region the reverse current of a silicon diode doubles for every 10°C rise in temperature. “

“The reverse breakdown voltage of a semiconductor diode will increase or decrease with temperature.”