The layered approach described in Section 2.7.2 is taken to its logical conclusion in the concept of a virtual machine. The fundamental idea behind a virtual machine is to abstract the hardware of a single computer (the CPU, memory, disk drives, network interface cards, and so forth) into several different execution environments, thereby creating the illusion that each separate execution environment is running its own private computer. By using CPU scheduling (Chapter 5) and virtual-memory techniques (Chapter 9), an operating system can create the illusion that a process has its own processor with its own (virtual) memory. Normally, a process has additional features, such as system calls and a file system, that are not provided by the bare hardware.

The virtual-machine approach does not provide any such additional functionality but rather provides an interface that is identical to the underlying bare hardware. Each process is provided with a (virtual) copy of the underlying computer (Figure 2.15). 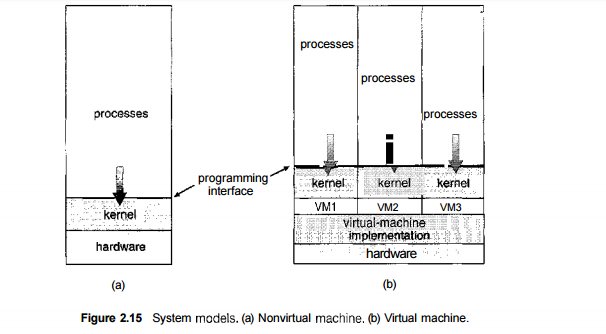 There are several reasons for creating a virtual machine, all of which are fundamentally related to being able to share the same hardware yet run several different execution environments (that is, different operating systems) concurrently. We will explore the advantages of virtual machines in more detail in Section 2.8.2.

Throughout much of this section, we discuss the VM operating system for IBM systems, as it provides a useful working example; furthermore IBM pioneered the work in this area. A major difficulty with the virtual-machine approach involves disk systems. Suppose that the physical machine has three disk drives but wants to support seven virtual machines. Clearly, it cannot allocate a disk drive to each virtual machine, because the virtual-machine software itself will need substantial disk space to provide virtual memory and spooling. The solution is to provide virtual disks—termed minidisks in IBM's VM operating system —that are identical in all respects except size.

The system implements each minidisk by allocating as many tracks on the physical disks as the minidisk needs. Obviously, the sum of the sizes of all minidisks must be smaller than the size of the physical disk space available. Users thus are given their own virtual machines. They can then run any of the operating systems or software packages that are available on the underlying machine. For the IBM VM system, a user normally runs CMS—a single-user interactive operating system. The virtual-machine software is concerned with multiprogramming multiple virtual machines onto a physical machine, but it does not need to consider any user-support software. This arrangement may provide a useful way to divide the problem of designing a multiuser interactive system into two smaller pieces.

Although the virtual-machine concept is useful, it is difficult to implement. Much work is required to provide an exact duplicate of the underlying machine. Remember that the underlying machine has two modes: user mode and kernel mode. The virtual-machine software can run in kernel mode, since it is the operating system. The virtual machine itself can execute in only user mode. Just as the physical machine has two modes, however, so must the virtual machine. Consequently, we must have a virtual user mode and a virtual kernel mode, both of which run in a physical user mode.

The virtual-machine concept has several advantages. Notice that, in this environment, there is complete protection of the various system resources. Each virtual machine is completely isolated from all other virtual machines, so there are no protection problems. At the same time, however, there is no direct sharing of resources. Two approaches to provide sharing have been implemented. First, it is possible to share a minidisk and thus to share files. This scheme is modeled after a physical shared disk but is implemented by software. Second, it is possible to define a network of virtual machines, each of which can send information over the virtual communications network.

Since it makes the system unavailable to users, systemdevelopment time is often scheduled late at night or on weekends, when system load is low. A virtual-machine system can eliminate much of this problem. System programmers are given their own virtual machine, and system development is done on the virtual machine instead of on a physical machine. Normal system operation seldom needs to be disrupted for system development.

VMware is a popular commercial application that abstracts Intel 80X86 hardware into isolated virtual machines. VMware runs as an application on a host operating system such as Windows or Linux and allows this host system to concurrently run several different guest operating systems as independent virtual machines. Consider the following scenario: A developer has designed an application and would like to test it on Linux, FreeBSD, Windows NT, and Windows XP. One option is for her to obtain four different computers, each running a copy of one of these operating systems. Another alternative is for her first to install Linux on a computer system and test the application, then to install FreeBSD and test the application, and so forth. This option allows her to use the same physical computer but is time-consuming, since she must install a new operating system for each test. Such testing could be accomplished concurrently on the same physical computer using VMware.

In this case, the programmer could test the application on a host operating system and on three guest operating systems with each system running as a separate virtual machine. The architecture of such a system is shown in Figure 2.16.

Java is a popular object-oriented programming language introduced by Sun Microsystems in 1995. In addition to a language specification and a large API library, Java also provides a specification for a Java virtual machine—or JVM. Java objects are specified with the class construct; a Java program consists of one or more classes. For each Java class, the compiler produces an architecture-neutral bytecode output (.class) file that will run on any implementation of the JVM. The JVMis a specification for an abstract computer. It consists of a class loader and a Java interpreter that executes the architecture-neutral bytecodes, as diagrammed in Figure 2.17. 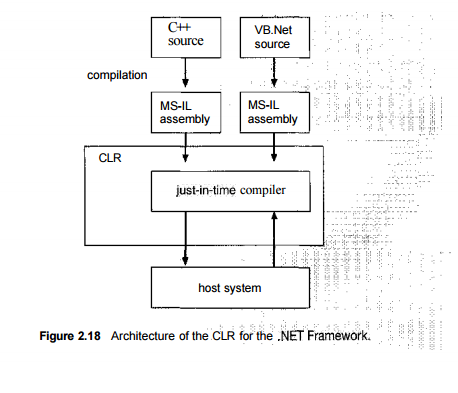 The class loader loads the compiled . class files from both the Java program and the Java API for execution by the Java interpreter. After a class is loaded, the verifier checks that the . class file is valid Java bytecode and does not overflow or underflow the stack. It also ensures that the bytecode does not perform pointer arithmetic, which could provide illegal memory access. If the class passes verification, it is run by the Java interpreter. The JVM also automatically manages memory by performing garbage collection—the practice of reclaiming memory from objects no longer in use and returning it to the system. Much research focuses on garbage collection algorithms for increasing the performance of Java programs in the virtual machine. The JVM may be implemented in software on top of a host operating system, such as Windows, Linux, or Mac OS X, or as part of a web browser. Alternatively, the JVM may be implemented in hardware on a chip specifically designed to run Java programs.

If the JVM is implemented in software, the Java interpreter interprets the bytecode operations one at a time. A faster software technique is to use a just-in-time (JIT) compiler. Here, the first time a Java method is invoked, the bytecodes for the method are turned into native machine language for the host system. These operations are then cached so that subsequent invocations of a method are performed using the native machine instructions and the bytecode operations need not be interpreted all over again. A technique that is potentially even faster is to run the JVM in hardware on a special Java chip that executes the Java bytecode operations as native code, thus bypassing the need for either a software interpreter or a just-in-time compiler.

The .MET Framework is a collection of technologies, including a set of class libraries, and an execution environment that come together to provide a platform for developing software. This platform allows programs to be written to target the .NTT Framework instead of a specific architecture. A program written for the .NET Framework need not worry about the specifics of the hardware or the operating system on which it will run. Thus, any architecture implementing .NET will be able to successfully execute the program, This is because the execution environment abstracts these details and provides a virtual, machine as an intermediary between the executing program and the underlying a rchitecture^ At the core of the .NET Framework is the Common Language Runtime (CLR). The CLR is the implementation of the .NET virtual machine. It provides an environment for execution of programs written in any of the languages targeted at the .NET Framework. Programs written in languages such as C# (pronounced C-sharp) and VB.NET are compiled into an intermediate, architecture-independent language called i\4icrosoft Intermediate Language (MS-1L).

These compiled files, called assemblies, include MS-IL instructions and metadata. They have a file extension of either .EXE or .DLL. Upon execution of a program, the CLR loads assemblies into what is known as the Application Domain. As instructions are requested by the executing program, the CLR converts the MS-IL instructions inside the assemblies into native code that is specific to the underlying arcliitecture using just-in-time compilation. Once instructions have been converted to native code, they are kept and will continue to run as native code for the CPU. The architecture of the CLR for the .NET framework is shown in Figure 2.1.8.