Before we can explore the details of how computer systems operate, we need a general knowledge of the structure of a computer system. In this section, we look at several parts of this structure to round out our background knowledge. The section is mostly concerned with computer-system organization, so you can skim or skip it if you already understand the concepts.

Computer-System Operation A modern general-purpose computer system consists of one or more CPUs and a number of device controllers connected through a common bus that provides access to shared memory . Each device controller is in charge of a specific type of device (for example, disk drives, audio devices, and video displays). The CPU and the device controllers can execute concurrently, competing for memory cycles.

To ensure orderly access to the shared memory, a memory controller is provided whose function is to synchronize access to the memory. For a computer to start running—for instance, when it is powered up or rebooted—it needs to have an initial program to run. This initial program, or bootstrap program, tends to be simple. Typically, it is stored in read-only memory (ROM) or electrically erasable programmable read-only memory (EEPROM), known by the general term firmware, within the computer hardware. It initializes all aspects of the system, from CPU registers to device controllers to memory contents.

The bootstrap program must know how to load the operating system and to start executing that system. To accomplish this goal, the bootstrap program must locate and load into memory the operatingsystem kernel. The operating system then starts executing the first process, such as "init," and waits for some event to occur. The occurrence of an event is usually signaled by an interrupt from either the hardware or the software. Hardware may trigger an interrupt at any time by sending a signal to the CPU, usually by way of the system bus.

Computer programs must be in main memory (also called random-access memory or RAM) to be executed. Main memory is the only large storage area (millions to billions of bytes) that the processor can access directly. It commonly is implemented in a semiconductor technology called dynamic random-access memory (DRAM), which forms an array of memory words.

A typical instruction-execution cycle, as executed on a system with a von Neumann architecture, first fetches an instruction from memory and stores that instruction in the instruction register. The instruction is then decoded and may cause operands to be fetched from memory and stored in some internal register. After the instruction on the operands has been executed, the result may be stored back in memory. Notice that the memory unit sees only a stream of memory addresses; it does not know how they are generated (by the instruction counter, indexing, indirection, literal addresses, or some other means) or what they are for (instructions or data). Accordingly, we can ignore hoio a memory address is generated by a program. We are interested only in the sequence of memory addresses generated by the running program. Ideally, we want the programs and data to reside in main memory permanently. This arrangement usually is not possible for the following two reasons:

1. Main memory is usually too small to store all needed programs and data permanently.

2. Main memory is a volatile storage device that loses its contents when power is turned off or otherwise lost. Thus, most computer systems provide secondary storage as an extension of main memory. The main requirement for secondary storage is that it be able to hold large quantities of data permanently. The most common secondary-storage device is a magnetic disk, which provides storage for both programs and data. Most programs (web browsers, compilers, word processors, spreadsheets, and so on) are stored on a disk until they are loaded into memory. Many programs then use the disk as both a source and a destination of the information for their processing.

In a larger sense, however, the storage structure that we have described— consisting of registers, main memory, and magnetic disks—is only one of many possible storage systems. Others include cache memory, CD-ROM, magnetic tapes, and so on. Each storage system provides the basic functions of storing a datum and of holding that datum until it is retrieved at a later time. The main differences among the various storage systems lie in speed, cost, size, and volatility. The wide variety of storage systems in a computer system can be organized in a hierarchy according to speed and cost. The higher levels are expensive, but they are fast. As we move down the hierarchy, the cost per bit generally decreases, whereas the access time generally increases. This trade-off is reasonable; if a given storage system were both faster and less expensive than another—other properties being the same—then there would be no reason to use the slower, more expensive memory. In fact, many early storage devices, including paper tape and core memories, are relegated to museums now that magnetic tape and semiconductor memory have become faster and cheaper. In addition to differing in speed and cost, the various storage systems are either volatile or nonvolatile.

If external power is interrupted, the electronic-disk controller copies the data from RAM to the magnetic disk. When external power is restored, the controller copies the data back into the RAM. Another form of electronic disk is flash memory, which is popular in cameras and personal digital assistants (PDAs), in robots, and increasingly as removable storage on general-purpose computers. Flash memory is slower than DRAM but needs no power to retain its contents. Another form of nonvolatile storage is NVRAM, which is DRAM with battery backup power. This memory can be as fast as DRAM but has a limited duration in which it is nonvolatile. The design of a complete memory system must balance all the factors just discussed: It must use only as much expensive memory as necessary while providing as much inexpensive, nonvolatile memory as possible. Caches can be installed to improve performance where a large access-time or transfer-rate disparity exists between two components.

Storage is only one of many types of I/O devices within a computer. A large portion of operating system code is dedicated to managing I/O, both because of its importance to the reliability and performance of a system and because of the varying nature of the devices. Therefore, we now provide an overview of I/O. A general-purpose computer system consists of CPUs and multiple device controllers that are connected through a common bus. 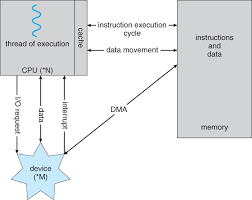 The device controller, in turn, examines the contents of these registers to determine what action to take (such as "read a character from the keyboard")- The controller starts the transfer of data from the device to its local buffer. Once the transfer of data is complete, the device controller informs the device driver via an interrupt that it has finished its operation. The device driver then returns control to the operating system, possibly returning the data or a pointer to the data if the operation was a read. For other operations, the device driver returns status information. This form of interrupt-driven I/O is fine for moving small amounts of data but can produce high overhead when used for bulk data movement such as disk I/O. To solve this problem, direct memory access (DMA) is used.

After setting up buffers, pointers, and counters for the I/O device, the device controller transfers an entire block of data directly to or from its own buffer storage to memory, with no intervention by the CPU. Only one interrupt is generated per block, to tell the device driver that the operation has completed, rather than the one interrupt per byte generated for low-speed devices. While the device controller is performing these operations, the CPU is available to accomplish other work. Some high-end systems use switch rather than bus architecture. On these systems, multiple components can talk to other components concurrently, rather than competing for cycles on a shared bus. In this case, DMA is even more effective.