Cost-Benefit and analysis -Tools and techniques

Costs fall into two categories. There are cost associated with developing the systems and there are costs associated with a operating a system. The former can be estimated from the outset of a project and should be refined at the end of each of each phase of the project. The latter can be estimated only after specific computer-based solution have been defined. Let’s take the closer look at the costs of information systems. The costs of developing an information system can be classified according to the phase in which they occur.
System development costs are usually one time costs that will not recur after the project has been completed. Many organizations have standard cost categories that must be evaluated. In the absence of such categories, the following list should be of help:

Here the present value of the costs and benefits of the future periods is used to compare and so the analysis. For this “present value” computation discounting is done to compare the money with what would have been earned if the money was put in some other projects.

When any project is started, many of the costs are incurred in the beginning while the benefits take time to start getting realized. Payback analysis is to determine when the accumulated benefits equal the initial investment. This period is called payback period. The shorter the period the faster the profits of the new system start to flow, and the more attractive the project seems.

Break-even analysis compares the costs of the current system to the new system. A new system has a larger investment in the beginning- over time, benefits start coming in. on the other hand for the current existing system, the costs are mainly the operational costs. The cost per transaction will be lower than that the old system beyond some volume. This is called the beak-even point. Below this volume the old system is less costly while above this volume the new system is less costly. 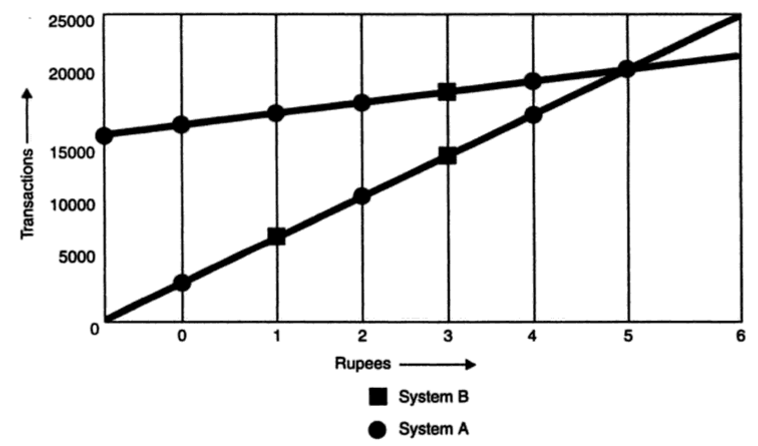 Cash flows out when money is spent and is received with revenues and earnings. By tabulating both the out flow and the inflow of cash expected over a period of time a clear picture is obtained. The plot of the accumulated flow gives the payback period and a break point. It also gives an idea of how much cash will be needed to get the new system going. The point where the accumulated cash flow turns positive is the pay back period.

+
Ans: System selection means selecting the various hardware, software, and services that are needed for implanting the system. Before the system selection can be done, it is necessary to know the capabilities of required proposed system view more..
+
Ans: It is a final report of the feasibility study about the findings and conclusion of the study. it should be possible to review report and take decision on the project based on it view more..
+
Ans: Feasibility studies are almost always conducted where large sums are at stake. Also called feasibility analysis. A feasibility study is conducted in order to determine the success and minimize the risks related to the project. When it becomes certain that the specific project could be carried out profitably view more..
+
Ans: Costs fall into two categories. There are cost associated with developing the systems and there are costs associated with a operating a system. view more..
+
Ans: Quantitative measure of degree to which a system, component or process possesses a given attribute For ex. No. of errors found per person hours expended Cost and Effort Estimation : Boehm’s COCOMO model, Putnam’s SLIM Model & Albrecht’s function model. view more..
+
Ans: There are three such classes: Process are collection of software related activities. Products are any artifacts, deliverables or documents that result from a process activity view more..
+
Ans: A direct measure is obtained by applying measurement rules directly to the phenomenon of interest.For example, by using the specified counting rules, a software program’s “Line of Code” can be measured directly. and sofware reliabity is .... view more..
+
Ans: What Is Information Systems Analysis and Design? Information systems analysis and design is a method used by companies ranging from IBM to PepsiCo to Sony to create and maintain information systems that perform basic business functions such as keeping track of customer names and addresses, processing orders, and paying employees. The main goal of systems analysis and design is to improve organizational systems, typically through applying software that can help employees accomplish key business tasks more easily and efficiently. As a systems analyst, you will be at the center of developing this software. view more..
+
Ans: concurrency of components, lack of a global clock and independent failures of components and the ability to work well when the load or the number of users increases – failure handling, concurrency of components, transparency and providing quality of service view more..
+
Ans: the wide range of applications in use today, from relatively localized systems (as found, for example, in a car or aircraft) to globalscale systems involving millions of nodes, from data-centric services to processorintensive tasks, from systems built from very small and relatively primitive sensors to those incorporating powerful computational elements, from embedded systems to ones that support a sophisticated interactive user experience, and so on. view more..
+
Ans: The task of a web search engine is to index the entire contents of the World Wide Web, encompassing a wide range of information styles including web pages, multimedia sources and (scanned) books view more..
+
Ans: The growth of the World Wide Web as a repository of information and knowledge; the development of web search engines such as Google and Yahoo to search this vast repository view more..
+
Ans: The engineering of MMOGs represents a major challenge for distributed systems technologies, particularly because of the need for fast response times to preserve the user experience of the game. view more..
+
Ans: a very different style of underlying architecture from the styles mentioned above (for example client-server), and such systems typically employ what is known as distributed event-based systems. view more..
+
Ans: the emergence of ubiquitous computing coupled with the desire to support user mobility in distributed systems view more..
+
Ans: The Internet is also a very large distributed system. It enables users, wherever they are, to make use of services such as the World Wide Web, email and file transfer. (Indeed, the Web is sometimes incorrectly equated with the Internet.) view more..
+
Ans: Technological advances in device miniaturization and wireless networking have led increasingly to the integration of small and portable computing devices into distributed systems. view more..
+
Ans: The crucial characteristic of continuous media types is that they include a temporal dimension, and indeed, the integrity of the media type is fundamentally dependent on preserving real-time relationships between elements of a media type. view more..
Next Article >>
Scope and classification of metrics