Consider how an executable program might be loaded from disk into memory. One option is to load the entire program in physical memory at program execution time. However, a problem with this approach, is that we may not initially need the entire program in memory. Consider a program that starts with a list of available options from which the user is to select. Loading the entire program into memory results in loading the executable code for all options, regardless of whether an option is ultimately selected by the user or not. An alternative strategy is to initially load pages only as they are needed. This technique is known as demand paging and is commonly used in virtual memory systems. 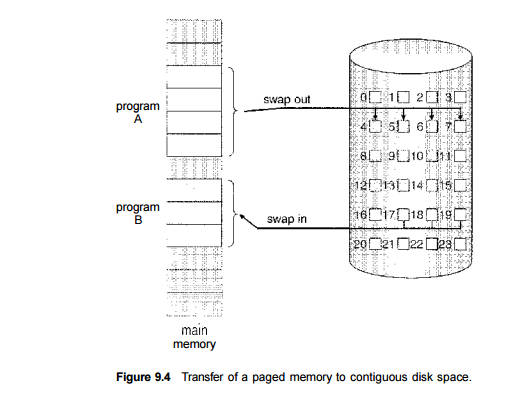 With demand-paged virtual memory, pages are only loaded when they are demanded during program execution; pages that are never accessed are thus never loaded into physical memory. A demand-paging system is similar to a paging system with swapping (Figure 9.4) where processes reside in secondary memory (usually a disk). When we want to execute a process, we swap it into memory. Rather than swapping the entire process into memory, however, we use a lazy swapper. A lazy swapper never swaps a page into memory unless that page will be needed. Since we are now viewing a process as a sequence of pages, rather than as one large contiguous address space, use of the term swapper is technically incorrect. A swapper manipulates entire processes, whereas a pager is concerned with the individual pages of a process. We thus use pager, rather than swapper, in connection with demand paging.

When a process is to be swapped in, the pager guesses which pages will be used before the process is swapped out again. Instead of swapping in a whole process, the pager brings only those necessary pages into memory. Thus, it avoids reading into memory pages that will not be used anyway, decreasing the swap rime and the amount of physical memory needed. With this scheme, we need some form of hardware support to distinguish between the pages that are in memory and the pages that are on the disk. The valid-invalid bit scheme described in Section 8.5 can be used for this purpose. This time, however, when this bit is set to "valid/" the associated page is both legal and in memory. 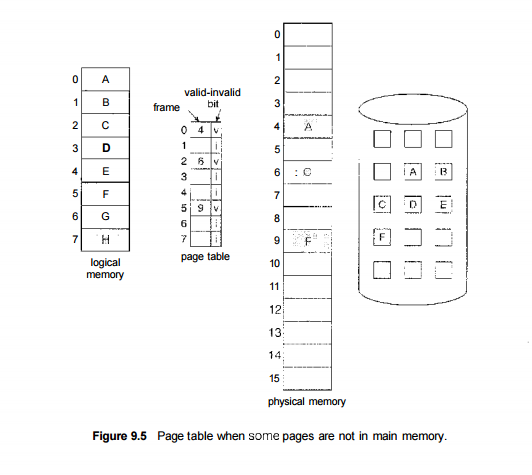 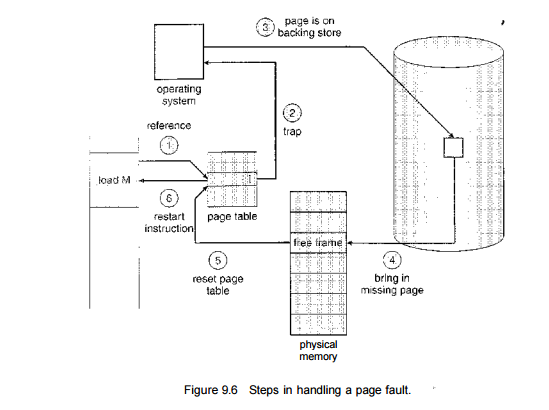 Notice that marking a page invalid will have no effect if the process never attempts to access that page. Hence, if we guess right and page in all and only those pages that are actually needed, the process will run exactly as though we had brought in all pages. While the process executes and accesses pages that are memory resident, execution proceeds normally.

But what happens if the process tries to access a page that was not brought into memory? Access to a page marked invalid causes a page-fault trap. The paging hardware, in translating the address through the page table, will notice that the invalid bit is set, causing a trap to the operating system. This trap is the result of the operating system's failure to bring the desired page into memory. The procedure for handling this page fault is straightforward (Figure 9.6):

1. We check an internal table (usually kept with the process control block) for this process to determine whether the reference was a valid or an invalid memory access.

2. If the reference was invalid, we terminate the process. If it was valid, but we have not yet brought in that page, we now page it in.

3. We find a free frame (by taking one from the free-frame list, for example).

4. We schedule a disk operation to read the desired page into the newly allocated frame.

5. When the disk read is complete, we modify the internal table kept with the process and the page table to indicate that the page is now in memory.

6. We restart the instruction that was interrupted by the trap. The process can now access the page as though it had always been in memory. In the extreme case, we can start executing a process with no pages in memory. When the operating system sets the instruction pointer to the first instruction of the process, which is on a non-memory-resident page, the process immediately faults for the page. After this page is brought into memory, the process continues to execute, faulting as necessary until every page that it needs is in memory. At that point, it can execute with no more faults. This scheme is pure demand paging: Never bring a page into memory until it is required. Theoretically, some programs could access several new pages of memory with each instruction execution (one page for the instruction and many for data), possibly causing multiple page faults per instruction.

This situation would result in unacceptable system performance. Fortunately, analysis of running processes shows that this behavior is exceedingly unlikely. Programs tend to have locality of reference, described in Section 9.6.1, which results in reasonable performance from demand paging. The hardware to support demand paging is the same as the hardware for paging and swapping:

• Page table. This table has the ability to mark an entry invalid through a valid-invalid bit or special value of protection bits.

Swap-space allocation is discussed in Chapter 12. A crucial requirement for demand paging is the need to be able to restart any instruction after a page fault. Because we save the state (registers, condition code, instruction counter) of the interrupted process when the page fault occurs, we must be able to restart the process in exactly the same place and state, except that the desired page is now in memory and is accessible. In most cases, this requirement is easy to meet. A page fault may occur at any memory reference. If the page fault occurs on the instruction fetch, we can restart byfetching the instruction again. If a page fault occurs while we are fetching an operand, we must fetch and decode the instruction then adding again. However, there is not much repeated work (less than one complete instruction), and the repetition is necessary only when a page fault occurs. The major difficulty arises when one instruction may modify several different locations. For example, consider the IBM. System 360/370 MVC (move character) instruction., which can move up to 256 bytes from one location to another (possibly overlapping) location. If either block (source or destination) straddles a page boundary, a page fault might occur after the move is partially done. In addition, if the source and destination blocks overlap, the source block may have been modified, in which case we cannot simply restart the instruction. This problem can be solved in two different ways. In one solution, the microcode computes and attempts to access both ends of both blocks. If a page fault is going to occur, it will happen at this step, before anything is modified. The move can then take place; w r e know that no page fault can occur, since all the relevant pages are in memory. The other solution uses temporary registers to hold the values of overwritten locations. If there is a page fault, all the old values are written back into memory before the trap occurs.

This action restores memory to its state before the instruction was started, so that the instruction can be repeated. This is by no means the only architectural problem resulting from adding paging to an existing architecture to allow demand paging, but it illustrates some of the difficulties involved. Paging is added between the CPU and the memory in a computer system. It should be entirely transparent to the user process. Thus, people often assume that paging can be added to any system. Although this assumption is true for a non-demand-paging environment, where a page fault represents a fatal error, it is not true where a page fault means only that an additional page must be brought into memory and the process restarted

1. Trap to the operating system

2. Save the user registers and process state.

3. Determine that the interrupt was a page fault.

' 4. Check that the page reference was legal and determine the location of the page on the disk.

5. Issue a read from the disk to a free frame: a. Wait in a queue for this device until the read request is serviced. b. Wait for the device seek and /or latency time. c. Begin the transfer of the page to a free frame.

6. While waiting, allocate the CPU to some other user (CPU scheduling, optional).

7. Receive an interrupt from the disk I/O subsystem (I/O completed).

8. Save the registers and process state for the other user (if step 6 is executed).

9. Determine that the interrupt was from the disk. 10. Correct the page table and other tables to show that the desired page is now in memory.

11. Wait for the CPU to be allocated to this process again.

12. Restore the user registers, process state, and new page table, and then resume the interrupted instruction. Not all of these steps are necessary in every case. For example, we are assuming that, in step 6, the CPU is allocated to another process while the I/O occurs. This arrangement allows multiprogramming to maintain CPU utilization but requires additional time to resume the page-fault service routine when the I/O transfer is complete. In any case, we are faced with three major components of the page-fault service time:

The first and third tasks can be reduced, with careful coding, to several hundred instructions. These tasks may take from 1 to 100 microseconds each. The page-switch time, however, will probably be close to 8 milliseconds. A typical hard disk has an average latency of 3 milliseconds, a seek of 5 milliseconds, and a transfer time of 0.05 milliseconds. Thus, the total paging time is about 8 milliseconds, including hardware and software time. Remember also that we are looking at only the device-service time. If a queue of processes is waiting for the device (other processes that have caused page faults), we have to add device-queueing time as we wait for the paging device to be free to service our request, increasing even more the time to swap.

The system can therefore gain better paging throughput by copying an entire file image into the swap space at process startup and then performing demand paging from the swap space. Another option is to demand pages from the file system initially but to write the pages to swap space as they are replaced. This approach will ensure that only needed pages are read from the file system but that all subsequent paging is done from swap space. Some systems attempt to limit the amount of swap space used through demand paging of binary files. Demand pages for such files are brought directly from the file system. However, when page replacement is called for, these frames can simply be overwritten (because they are never modified), and the pages can be read in from the file system, again if needed. Using this approach, the file system itself serves as the backing store. However, swap space must still be used for pages not associated with a file; these pages include the stack and heap for a process. This method appears to be a good compromise and is used in several systems, including Solaris and BSD UNIX.