Parity generator and checker network logic circuits constructed with exclusive-OR functions. This is because, as mentioned in Sec. 1·2, the exclusive-OR function of three or more varia.bles is by definition an odd function. An odd function is a logic function whose value is binary 1 if, and only if, an odd function number of variables are equal to 1. According to this definition, the P( even) is the exclusive-OR of x, y, and l because it is equal to 1 when either one or all three of the variables are equal to I (Table 3-7). The P(odd) function is the complement of the P(even) function. 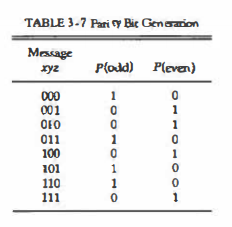 As an example, consider a 3-bit me&Sllge to be transmitted with an odd parity bit. At the sending end, the odd·parity bit is generated by a parity generator circuit. As shown in Fig. 3-3, this circuit consists of one exclusive-OR and one exclusive-NOR gate. Since P(even) is the exclusive-OR of x, y, z, and P(odd) is the complement of P(even), it is necessary to employ an exclusiveNOR gate for the needed complementation. The message and the odd-parity bit are transmitted to their destination where they are applied to a parity checker. An error has occurred during transmission if the parity of the four bits received is even, since the binary infonnation transmitted was originally odd. The output of the parity checker would be 1 when an error occurs, that is, when the number of l's in the four inputs is even. Since the exclusive-OR function of the four inputs is an odd function, we again need to complement the output by using an exclusive-NOR gate .. It is evident from the example above that even-parity generators and checkers can be implemented with exclusive-OR functions. Odd-parity networks need an exclusive-NOR at the output to complement the function.