Disk I/O has a huge impact on system performance. As a result, file-system design and implementation command quite a lot of attention from system designers. Some file systems are general purpose, in that they can provide reasonable performance and functionality for a wide variety of file sizes, file types, and I/O loads. Others are optimized for specific tasks in an attempt to provide better performance in those areas than general-purpose file systems.

The WAFL file system from Network Appliance is an example of this sort of optimization. WAFL, the ivrite-nin/wherc file layout, is a powerful, elegant file system optimized for random writes. WAFL is used exclusively on network file servers produced by Network Appliance and so is meant for use as a distributed file system. It can provide files to clients via the NFS, CIFS, ftp, and http protocols, although it was designed just for NFS and CIFS.

When many clients use these protocols to talk to a file server, the server may see a very large demand for random reads and an even larger demand for random writes. The NFS and CIFS protocols cache data from read operations, so writes are of the greatest concern to file-server creators. WAFL is used on file servers that include an NVRAM cache for writes. The WAFL designers took advantage of running on a specific architecture to optimize the file system for random I/O, with a stable-storage cache in front.

Ease of use is one of the guiding principles of WAFL, because it is designed to be used in an appliance. Its creators also designed it to include a new snapshot functionality that creates multiple read-only copies of the file system at different points in time, as we shall see. The file system is similar to the Berkeley Fast File System, with many modifications. It is block-based and uses inodes to describe files. Each inode contains 16 pointers to blocks (or indirect blocks) belonging to the file described by the inode. Each file system has a root inode. All of the metadata lives in files: all inodes are in one file, the free-block map in another, and the free-inode map in a third, as shown in Figure 11.16. Because these are standard files, the data blocks are not limited in location and can be placed anywhere.

If a file system is expanded by addition of disks, the lengths of these metadata files are automatically expanded by the file system. Thus, a WAFL file system is a tree of blocks rooted by the root inode. To take a snapshot, WAFL creates a duplicate root inode. Any file or metadata updates after that go to new blocks rather than overwriting their existing blocks. The new root inode points to metadata and data changed as a result of these writes. 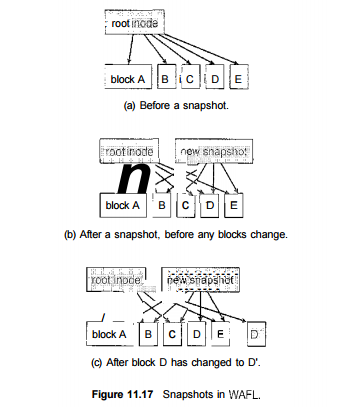 Meanwhile, the old root inode still points to the old blocks, which have not been updated. It therefore provides access to the file system just as it was at the instant the snapshot was made—and takes very little disk space to do so! In essence, the extra disk space occupied by a snapshot consists of just the blocks that have been modified since the snapshot was taken. An important change from more standard file systems is that the free-block map has more than one bit per block. It is a bitmap with a bit set for each snapshot that is using the block.

When all snapshots that have been using the block are deleted, the bit map for that block is all zeros, and the block is free to be reused. Used blocks are never overwritten, so writes are very fast, because a write can occur at the free block nearest the current head location. There are many other performance optimizations in WAFL as well. Many snapshots can exist simultaneously, so one can be taken each hour of the day and. each day of the month.

A user with access to these snapshots can access files as they were at any of the times the snapshots were taken. The snapshot facility is also useful for backups, testing, versioning, and so on. WAFL's snapshot facility is very efficient in that it does not even require that copy-on-write copies of each data block be taken before the block is modified. Other file systems provide snapshots, but frequently with less efficiency. WAFL snapshots are depicted in Figure 11.17