Just as a file must be opened before it is used, a file system must be mounted before it can be available to processes on the system. More specifically, the directory structure can be built out of multiple volumes, which must be mounted to make them available within the file-system name space. The mount procedure is straightforward. The operating system is given the name of the device and the mount point—the location within the file structure where the file system is to be attached. Typically, a mount point is an empty directory.

At this point, only the files on the existing file system can be accessed. Figure 10.13 shows the effects of mounting the volume residing on /device/dsk over /users. If the volume is unmounted, the file system is restored to the situation depicted in Figure 10.12. 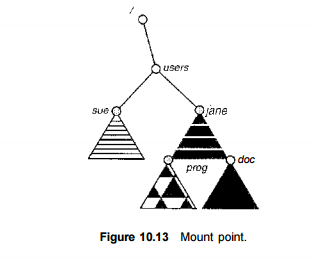 As another example, a system may allow the same file system to be mounted repeatedly, at different mount points; or it may only allow one mount per file system. Consider the actions of the Macintosh operating system. Whenever the system encounters a disk for the first time (hard disks are found at boot time, and floppy disks are seen when they are inserted into the drive), the Macintosh operating system searches for a file system on the device. If it finds one, it automatically mounts the file system at the root level, adding a folder icon on the screen labeled with the name of the file system (as stored in the device directory). The user is then able to click on the icon and thus display the newly motinted file system. The Microsoft Windows family of operating systems (95, 98, NT, small 2000, XP) maintains an extended two-level directory structure, with devices and volumes assigned drive letters.

Volumes have a general graph directory structure associated with the drive letter. The path to a specific file takes the form of drive-letter;\path\to\file. The more recent versions of Windows allow a file system to he mounted anywhere in the directory tree, just as UNIX does. Windows operating systems automatically discover all devices and mount all located file systems at boot time. In some systems, like UNIX, the mount commands are explicit. A system configuration file contains a list of devices and mount points for automatic mounting at boot time, but other mounts may be executed manually.