Firewalling to Protect Systems and Networks

Firewalling to Protect Systems and Networks

We turn next to the question of how a trusted computer can be connected safely to an untrustworthy network. One solution is the use of a firewall to separate trusted and untrusted systems. A firewall is a computer, appliance, or router that sits between the trusted and the untrusted. A network firewall limits network access between the two security domains and monitors and logs all connections. It can also limit connections based on source or destination address, source or destination port, or direction of the connection. For instance, web servers use HTTP to communicate with web browsers. A firewall therefore may allow only HTTP to pass from all hosts outside the firewall to the web server within the firewall. The Morris Internet worm used the f inger protocol to break into computers, so finger would not be allowed to pass, for example. 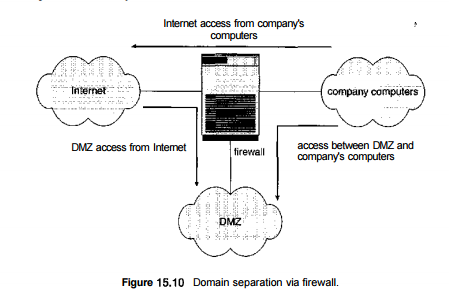 With a firewall, however, access is contained, and any DMZ systems that are broken into still are unable to access the company computers. Of course, a firewall itself must be secure and attack-proof; otherwise, its ability to secure connections can be compromised. Furthermore, firewalls do not prevent attacks that tunnel, or travel within protocols or connections that the firewall allows.

A buffer-overflow attack to a web server will not be stopped by the firewall, for example, because the HTTP connection is allowed; it is the contents of the HTTP connection that house the attack. Likewise, denial-ofservice attacks can affect firewalls as much as any other machines. Another vulnerability of firewalls is spoofing, in which an unauthorized host pretends to be an authorized host by meeting some authorization criterion. For example, if a firewall rule allows a connection from a host and identifies that host by its IP address, then another host could send packets using that same address and be allowed through the firewall.

In addition to the most common network firewalls, there are other, newer kinds of firewalls, each with its pros and cons. A personal firewall is a software layer either included with the operating system or added as an application. Rather than limiting communication between security domains, it limits communication to (and possibly from) a given host.

A user could add a personal firewall to her PC so that a Trojan horse would be denied access to the network to which the PC is connected. An application proxy firewall understands the protocols that applications speak across the network. For example, SMTP is used for mail transfer. An application proxy accepts a connection just as an SMTP server would and then initiates a connection to the original destination SMTP server. It can monitor the traffic as it forwards the message, watching for and disabling illegal commands, attempts to exploit bugs, and so on.

Some firewalls are designed for one specific protocol. An XML firewall, for example, has the specific purpose of analyzing XML traffic and blocking disallowed or malformed XML. System-call firewalls sit between applications and the kernel, monitoring system-call execution. For example, in Solaris 10, the "least privilege" feature implements a list of more than fifty system calls that processes may or may not be allowed to make. A process that does not need to spawn other processes can have that ability taken away, for instance.