<<
IP Routers in a Line|Mininet

The next step is to automate the discovery of the route from h1 to h2 (and back) by using a simple distancevector routing-update protocol. We present a partial implementation of the Routing Information Protocol, RIP, as defined in RFC 2453.

The distance-vector algorithm is described in 13.1 Distance-Vector Routing-Update Algorithm. In brief, the idea is to add a cost attribute to the forwarding table, so entries have the form xdestination,next_hop,costy. Routers then send xdestination,costy lists to their neighbors; these lists are referred to the RIP specification as update messages. Routers receiving these messages then process them to figure out the lowest-cost route to each destination. The format of the update messages is diagrammed below: 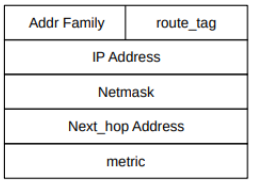 increase case of 13.1.1 Distance-Vector Update Rules, we do not include any test for whether a link is down, so this case is never triggered.

The implementation is in the Python3 file rip.py. Most of the time, the program is waiting to read update messages from other routers. Every UPDATE_INTERVAL seconds the program sends out its own update messages. All communication is via UDP packets sent using IP multicast, to the official RIP multicast address 224.0.0.9. Port 520 is used for both sending and receiving.

Rather than creating separate threads for receiving and sending, we configure a short (1 second) recv() timeout, and then after each timeout we check whether it is time to send the next update. An update can be up to 1 second late with this approach, but this does not matter.

The program maintains a “shadow” copy RTable of the real system forwarding table, with an added cost column. The real table is updated whenever a route in the shadow table changes. In the program, RTable is a dictionary mapping TableKey values (consisting of the IP address and mask) to TableValue objects containing the interface name, the cost, and the next_hop.

To run the program, a “production” approach would be to use Mininet’s Node.cmd() to start up rip.py on each router, eg via r.cmd('python3 rip.py &') (assuming the file rip.py is located in the same directory in which Mininet was started). For demonstrations, the program output can be observed if the program is started in an xterm on each router.

Sending IP multicast involves special considerations that do not arise with TCP or UDP connections. The first issue is that we are sending to a multicast group – 224.0.0.9 – but don’t have any multicast routes (multicast trees, 25.5 Global IP Multicast) configured. What we would like is to have, at each router, traffic to 224.0.0.9 forwarded to each of its neighboring routers.

However, we do not actually want to configure multicast routes; all we want is to reach the immediate neighbors. Setting up a multicast tree presumes we know something about the network topology, and, at the point where RIP comes into play, we do not. The multicast packets we send should in fact not be forwarded by the neighbors (we will enforce this below by setting TTL); the multicast model here is very local. Even if we did want to configure multicast routes, Linux does not provide a standard utility for manual multicast-routing configuration; see the ip-mroute.8 man page.

So what we do instead is to create a socket for each separate router interface, and configure the socket so that it forwards its traffic only out its associated interface. This introduces a complication: we need to get the list of all interfaces, and then, for each interface, get its associated IPv4 addresses with netmasks. (To simplify life a little, we will assume that each interface has only a single IPv4 address.) The function getifaddrdict() returns a dictionary with interface names (strings) as keys and pairs (ipaddr,netmask) as values. If ifaddrs is this dictionary, for example, then ifaddrs['r1-eth0'] might be ('10. 0.0.2','255.255.255.0'). We could implement getifaddrdict() straightforwardly using the Python module netifaces, though for demonstration purposes we do it here via low-level system calls.

We get the list of interfaces using myInterfaces = os.listdir('/sys/class/net/'). For each interface, we then get its IP address and netmask (in get_ip_info(intf)) with the following:

We need to create the socket here (never connected) in order to call ioctl(). The SIOCGIFADDR and SIOCGIFNETMASK values come from the C language include file; the Python3 libraries do not make these constants available but the Python3 fcntl.ioctl() call does pass the values we provide directly to the underlying C ioctl() call. This call returns its result in a C struct ifreq; the ifreq above is a Python version of this. The binary-format IPv4 address (or netmask) is at offset 20.

We are now in a position, for each interface, to create a UDP socket to be used to send and receive on that interface. Much of the information here comes from the Linux socket.7 and ip.7 man pages. The function createMcastSockets(ifaddrs) takes the dictionary above mapping interface names to (ipaddr,netmask) pairs and, for each interface intf, configures it as follows. The list of all the newly configured sockets is then returned.

The first step is to obtain the interface’s address and mask, and then convert these to 32-bit integer format as ipaddrn and netmaskn. We then enter the subnet corresponding to the interface into the shadow routing table RTable with a cost of 1 (and with a next_hop of None), via

Next we create the socket and begin configuring it, first by setting its read timeout to a short value. We then set the TTL value used by outbound packets to 1. This goes in the IPv4 header Time To Live field (9.1 The IPv4 Header); this means that no downstream routers will ever forward the packet. This is exactly what we want; RIP uses multicast only to send to immediate neighbors.

The next call makes the socket receive only packets arriving on the specified interface:?

We add the following to prevent packets sent on the interface from being delivered back to the sender; otherwise multicast delivery may do just that:

The next call makes the socket send on the specified interface. Multicast packets do have IPv4 destination addresses, and normally the kernel chooses the sending interface based on the IP forwarding table. This call overrides that, in effect telling the kernel how to route packets sent via this socket. (The kernel may also be able to figure out how to route the packet from the subsequent call joining the socket to the multicast group.)

Finally we can join the socket to the multicast group represented by 224.0.0.9. We also need the interface’s IP address, ipaddr.

The last step is to bind the socket to the desired address and port, with sock.bind(('224.0.0.9', 520)). This specifies the source address of outbound packets; it would fail (given that we are using the same socket address for multiple interfaces) without the SO_REUSEADDR configuration above.

The rest of the implementation is relatively nontechnical. One nicety is the use of select() to wait for arriving packets on any of the sockets created by createMcastSockets() above; the alternatives might be to poll each socket in turn with a short read timeout or else to create a separate thread for each socket. The select() call takes the list of sockets (and a timeout value) and returns a sublist consisting of those sockets that have data ready to read. Almost always, this will be just one of the sockets. We then read the data with s.recvfrom(), recording the source address src which will be used when we, next, call update_tables(). When a socket closes, it must be removed from the select() list, but the sockets here do not close; for more on this, see 30.6.1.2 dualreceive.py.

The update_tables() function takes the incoming message (parsed into a list of RipEntry objects via parse_msg()) and the IP address from which it arrives, and runs the distance-vector algorithm of 13.1.1 Distance-Vector Update Rules. TK is the TableKey object representing the new destination (as an (addr,netmask) pair). The new destination rule from 13.1.1 Distance-Vector Update Rules is applied when TK is not present in the existing RTable. The lower cost rule is applied when newcost < currentcost, and the third next_hop increase rule is applied when newcost > currentcost but currentnexthop == update_sender.