The SSH software package was built from the ground up to implement the SSH protocol. All modern web browsers incorporate TLS libraries to enable secure web connections. What can you do if you want to add encryption (or authentication) to a network application that doesn’t have it built in? Or, alternatively, how can you as a system administrator ensure that everyone’s traffic is protected, regardless of what software they are using?

IPsec, for “IP security”, is one answer. It is a general-purpose security protocol which typically behaves as if it were a network sublayer below the IP layer (or, in transport mode, below the Transport layer). In this it is akin to Wi-Fi (4.2.5 Wi-Fi Security), which implements encryption within the LAN layer; in both Wi-Fi and IPsec the encryption is transparent to the communicating applications. In terms of actual implementation it is most often incorporated within the IP layer, but can be implemented as an external network appliance.

IPsec can be used to protect anything from individual TCP (or UDP) connections to all traffic between a pair of routers. It is often used to implement VPN-like access from “outside” hosts to private subnets behind NAT routers. It is easily adapted to support any encryption or authentication mechanism. IPsec supports two packet formats: the authentication header, AH, for authentication only, and the encapsulating security payload, ESP, below, for either authentication or encryption or both. The ESP format is much more common and is the only one we will consider here. The AH format dates from the days when most export of encryption software from the United States was banned (see the sidebar ‘Crypto Law’ at 28.7.2 Block Ciphers), and, in any event, the ESP format can be used for authentication only. The ESP packet format is as follows: 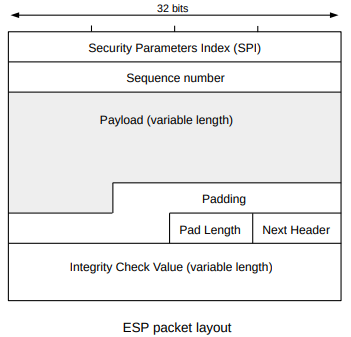 The SPI identifies the security association, below. The sequence number is there to prevent replay attacks. Senders must increment it on every transmission, but receivers care only if the received numbers are not strictly increasing; gaps due to lost packets do not matter. The cryptographic algorithm applied to the payload and the integrity-check algorithm are negotiated at connection set-up. The Padding field is used first to bring the Payload length up to a multiple of the applicable encryption blocksize, and then to round up the total to a multiple of four bytes. The Next Header field describes the data that is inside the Payload, eg TCP or UDP for Transport mode or IP for Tunnel mode. It corresponds to the Protocol field of 9.1 The IPv4 Header or the Next Header field of 11.1 The IPv6 Header.

IPsec has two primary modes: transport and tunnel. In transport mode, the IPsec endpoints are also typically the traffic endpoints, and only the transport-layer header (eg TCP header) and data are encrypted or protected. In the more-common tunnel mode one of the IPsec endpoints is often a router (or “security gateway”); encryption or protection includes the original IP headers, so that an eavesdropper cannot necessarily identify the actual traffic endpoints.

IPsec is documented in a wide range of RFCs. A good overview of the architectural principles is found in RFC 4301. The ESP packet format is described in RFC 4303.

A word of warning: while IPsec does support modern encryption, it also continues to support outdated algorithms as well; users must take care to ensure that the encryption negotiated is sufficient. IPsec has also attracted, in recent years, rather less attention from the security community than SSH or TLS, and “many eyes make all bugs shallow”. Or at least some bugs.

In order for a given connection or node-to-node path to receive IPsec protection, it is first necessary to set up a pair of security associations. A security association consists of all necessary encryption/authentication attributes – algorithms, keys, rekeying rules, etc – together with a set of selectors to identify the covered

The destination and source IP addresses need not be the same as the IP addresses of the IPsec endpoints. As an example, consider the following tunnel-mode arrangement, in which traveling host A wants to connect to private subnet 10.1.2.0/24 through security gateway B. IPv4 addresses are shown, but the same arrangement can be created with IPv6.

The A-to-B IPsec security association’s selector will include the entire subnet 10.1.2.0/24 in its set of destination addresses. A packet from A to 10.1.2.3 arriving at A’s IPsec interface will match this selector, and will be encapsulated and sent (via normal Internet routing) to B at 100.7.8.9. B will de-encapsulate the packet, and then forward it on to 10.1.2.3 using its normal IP forwarding table. B might actually be the NAT router at its site, with external address 10.7.8.9 and internal subnet 10.1.2.0/24, or B might simply be a publicly visible host at its site that happens to have a route to the private 10.1.2.0/24 subnet.

The action of forwarding the encapsulated packet from A to B closely resembles IP forwarding, but isn’t quite. It is unlikely A will have a true forwarding-table entry for 10.1.2.0/24 at all; it will very likely have only a single default route to its local ISP connection. Delivery of the packet cannot be understood simply by examining A’s IP forwarding table. A might even have a forwarding-table entry for 10.1.2.0/24 to somewhere else, but the IPsec “pseudo-route” to B’s 10.1.2.0/24 is still the one taken. This can easily lead to confusion; for complex arrangements with multiple overlapping security associations, this can lead to nontrivial difficulties in figuring out just how a packet is forwarded.

A second routing issue exists at B’s end. Host 10.1.2.3 will see the packet from A arrive with address 200.4.5.6. Its reply back to A will be delivered to A using the tunnel only if the B-site routing infrastructure routes the packet back to B. If B is the NAT router, this will happen as a matter of course, but otherwise some deliberate action may need to be taken to avoid having 10.1.2.3-to-A traffic take an unsecured route. Additionally, the B-to-A security association needs to list 10.1.2.0/24 in its list of source addresses. The IPsec “pseudo-route” now resembles the policy-based routing of 13.6 Routing on Other Attributes, with routing based on both destination and source addresses. A packet for A arriving at B with source address 10.2.4.3 should not take the IPsec tunnel. (To add confusion, Linux IPsec pseudo-routes do not actually show up in the Linux policy-based routing tables.)

Security associations are created through a software management interface, eg via the Linux ipsec command and the associated configuration file ipsec.conf. It is possible for an application to request creation of the necessary security associations, but it is more common for these to be set up before the IPsec-protected application starts up.

A request for the creation of a security association typically triggers the invocation of the Internet Key Exchange, IKE, protocol; the current version 2 is often abbreviated IKEv2. IKEv2 is described in RFC

7296. IKEv2 typically uses public keys to negotiate a session key (28.7.1 Session Keys); IKEv2 may then renegotiate the session key at intervals. In the simplest (and not very secure) case, both sides have been manually configured with a session key, and IKEv2 has little to do beyond verifying that the two sides have the same key.

NAT traversal of IPsec packets is particularly tricky. For AH packets it is impossible, because the cryptographic authentication code in the packet covers the original IP addresses, as well as the packet transport data. That is not an issue for ESP packets, but even there the incoming packet must match the receivers’s security-association selector, which it will not if that was negotiated using the sender’s original IP address. An additional problem is that many NAT routers fail to forward (or fail to forward properly) packets outside of protocols ICMP, UDP and TCP.

As a result, IPsec has its very own NAT-traversal mechanism, outlined in RFC 3715, RFC 3947 and RFC 3948. IPsec packets are encapsulated in UDP packets, with their original headers. After de-encapsulation at the IPsec receiving end, it is these original headers that are used in the security-association check. Additionally, a keepalive mechanism is defined in which the IPsec nodes send regular small packets to make sure the NAT mapping for the connection does not time out.