Disk drives are the major secondary-storage I/O devices on most computers. Most secondary storage devices are either magnetic disks or magnetic tapes. Modern disk drives are structured as a large one-dimensional array of logical disk blocks which is usually 512 bytes. Disks may be attached to a computer system in one of two ways:

(2) using a network connection such as storage area networks.

Requests for disk I/O are generated by the file system and by the virtual memory system. Each request specifies the address on the disk to be referenced, in the form of a logical block number. Disk-scheduling algorithms can improve the effective bandwidth, the average response time, and the variance in response time. Algorithms such as SSTF, SCAN, C-SCAN, LOOK, and C-LOOK are designed to make such improvements through strategies for disk-queue ordering. 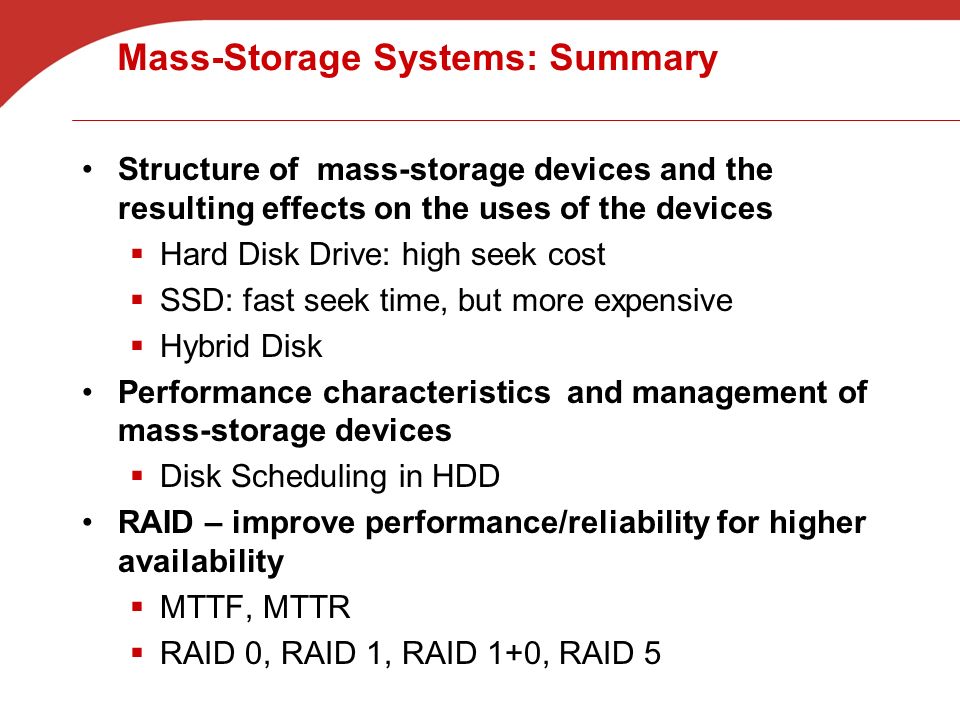 The operating system manages the disk blocks. First, a disk must be lowlevel-formatted to create the sectors on the raw hardware—new disks usually come preformatted. Then, the disk is partitioned, file systems are created, and boot blocks are allocated to store the system's bootstrap program. Finally, when a block is corrupted, the system must have a way to lock out that block or to replace it logically with a spare. Because an efficient swap space is a key to good performance, systems usually bypass the file system and use raw disk access for paging I/O.

Some systems dedicate a raw disk partition to swap space, and others use a file within the file system instead. Still other systems allow the user or system administrator to make the decision by providing both options. Because of the amount of storage required on large systems, disks are frequently made redundant via RAID algorithms. These algorithms allow more than one disk to be used for a given operation and allow continued operation and even automatic recovery in the face of a disk failure.

RAID algorithms are organized into different levels; each level provides some combination of reliability and high transfer rates. The write-ahead log scheme requires the availability of stable storage. To implement such storage, we need to replicate the needed information on multiple nonvolatile storage devices (usually disks) with independent failure Exercises 489 modes. We also need to update the information in a controlled manner to ensure that we can recover the stable data after any failure during data transfer or recovery.

Tertiary storage is built from disk and tape drives that use removable media. Many different technologies are available, including magnetic tape, removable magnetic and magneto-optic disks, and optical disks. For removable disks, the operating system generally provides the full services of a file-system interface, including space management and requestqueue scheduling.

For many operating systems, the name of a file on a removable cartridge is a combination of a drive name and a file name within that drive. This convention is simpler but potentially more confusing than is using a name that identifies a specific cartridge. For tapes, the operating system generally just provides a raw interface.

Many operating systems have no built-in support for jukeboxes. Jukebox support can be provided by a device driver or by a privileged application designed for backups or for HSM. Three important aspects of performance are bandwidth, latency, and reliability. Many bandwidths are available for both disks and tapes, but the random-access latency for a tape is generally much greater than that for a disk.

Switching cartridges in a jukebox is also relatively slow. Because a jukebox has a low ratio of drives to cartridges, reading a large fraction of the data in a jukebox can take a long time. Optical media, which protect the sensitive layer with a transparent coating, are generally more robust than magnetic media, which are more likely to expose the magnetic material to physical damage.

+
Ans: Summary It is desirable to be able to execute a process whose logical address space is larger than the available physical address space. Virtual memory is a technique that enables us to map a large logical address space onto a smaller physical memory. Virtual memory allowr s us to run extremely large processes and to raise the degree of multiprogramming, increasing CPU utilization. Further, it frees application programmers from worrying about memory availability. In addition, with virtual memory, several processes can share system libraries and memory. view more..
+
Ans: Summary CPU scheduling is the task of selecting a waiting process from the ready queue and allocating the CPU to it. The CPU is allocated to the selected process by the dispatcher. First-come, first-served (FCFS) scheduling is the simplest scheduling algorithm, but it can cause short processes to wait for very long processes. Shortestjob-first (SJF) scheduling is provably optimal, providing the shortest average waiting time. Implementing SJF scheduling is difficult, however, because predicting the length of the next CPU burst is difficult. view more..
+
Ans: Summary Multimedia applications are in common use in modern computer systems. Multimedia files include video and audio files, which may be delivered to systems such as desktop computers, personal digital assistants, and cell phones. view more..
+
Ans: Summary Disk drives are the major secondary-storage I/O devices on most computers. Most secondary storage devices are either magnetic disks or magnetic tapes. Modern disk drives are structured as a large one-dimensional array of logical disk blocks which is usually 512 bytes. Disks may be attached to a computer system in one of two ways: (1) using the local I/O ports on the host computer or (2) using a network connection such as storage area networks. view more..
+
Ans: Microsoft designed Windows XP to be an extensible, portable operating system —one able to take advantage of new techniques and hardware. Windows XP supports multiple operating environments and symmetric multiprocessing, including both 32-bit and 64-bit processors and NUMA computers. view more..
+
Ans: Summary A deadlock state occurs when two or more processes are waiting indefinitely for an event that can be caused only by one of the waiting processes. There are three principal methods for dealing with deadlocks: • Use some protocol to prevent or avoid deadlocks, ensuring that the system, will never enter a deadlock state. • Allow the system to enter a deadlock state, detect it, and then recover. • Ignore the problem altogether and pretend that deadlocks never occur in the system. The third solution is the one used by most operating systems, including UNIX and Windows view more..
+
Ans: Summary A process is a program in execution. As a process executes, it changes state. The state of a process is defined by that process's current activity. Each process may be in one of the following states: new, ready, running, waiting, or terminated. view more..
+
Ans: Summary A file is an abstract data type defined and implemented by the operating system. It is a sequence of logical records. A logical record may be a byte, a line (of fixed or variable length), or a more complex data item. The operating system may specifically support various record types or may leave that support to the application program. view more..
+
Ans: Summary Memory-management algorithms for multiprogrammed operating systems range from the simple single-user system approach to paged segmentation. The most important determinant of the method used in a particular system is the hardware provided. view more..
Next Article >>
Windows XP- Summary