Consider a sequential read of a file on disk using the standard system calls openQ, readO, and writeQ. Each file access requires a system call and disk access. Alternatively, we can use the virtual memory techniques discussed so far to treat file I/O as routine memory accesses. This approach, known as memory mapping a file, allows a part of the virtual address space to be logically associated with the file.

Memory mapping a file is accomplished by mapping a disk block to a page (or pages) in memory. Initial access to the file proceeds through ordinary demand paging, resulting in a page fault. However, a page-sized portion of the file is read from the file system into a physical page (some systems may opt  to read in more than a page-sized chunk of memory at a time).

Subsequent reads and writes to the file are handled as routine memory accesses, thereby simplifying file access and usage by allowing the system to manipulate files through memory rather than incurring the overhead of using the readQ and writeO system calls. Note that writes to the file mapped in memory are not necessarily immediate (synchronous) writes to the file on disk. Some systems may choose to update the physical file when the operating system periodically checks whether the page in memory has been modified. When the file is closed, all the memory-mapped data are written back to disk and removed from the virtual memory of the process. 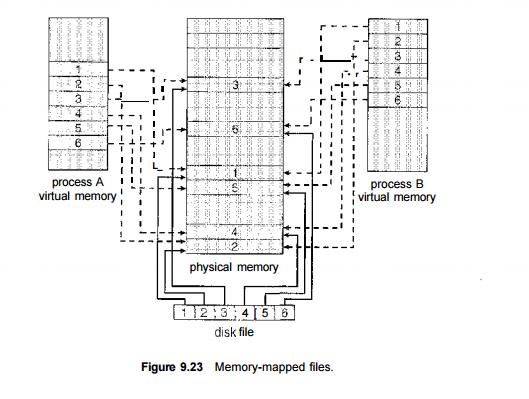 If a file is opened and accessed using ordinary system calls, such as openO, read(), and write(), Solaris still memory-maps the file; however, the file is mapped to the kernel address space. Regardless of how the file is opened, then, Solaris treats all file I/O as memory-mapped, allowing file access to take place via the efficient memory subsystem. Multiple processes may be allowed to map the same file concurrently, to allow sharing of data. Writes by any of the processes modify the data in virtual memory and can be seen by all others that map the same section of the file. Given our earlier discussions of virtual memory, it should be* clear how the sharing of memory-mapped sections of memory is implemented:

The virtual memory map of each sharing process points to the same page of physical memory—the page that holds a copy of the disk block. This memory sharing is illustrated in Figure 9.23. The memory-mapping system calls can also support copy-on-write functionality, allowing processes to share a file in read-only mode but to have their own copies of any data they modify. So that access to the shared data is coordinated, the processes involved might use one of the mechanisms for achieving mutual exclusion described in Chapter 6. In many ways, the sharing of memory-mapped files is similar to shared memory as described in Section 3.4.1. Not all systems use the same mechanism for both; on UNIX and Linux systems, for example, memory mapping is accomplished with the mmap () system call, whereas shared memory is achieved with the POSJX-compliant shmgetO and shmatO systems calls (Section 3.5.1). On Windows NT, 2000, and XP systems, however, shared memory is accomplished by memory mapping files.

Shared Memory in the Win32 API

The general outline for creating a region of shared, memory using memorymapped files in the Win32 API involves first creating a file mapping for the file to be mapped and then establishing a view of the mapped file in a process's virtual address space. A second process can then open and create a view of the mapped file in its virtual address space. The mapped file represents the shared-memory object that will enable communication to take place between the processes. We next illustrate these steps in more detail. In this example, a producer process first creates a shared-memory object using the memory-mapping features available in the Win32 API. 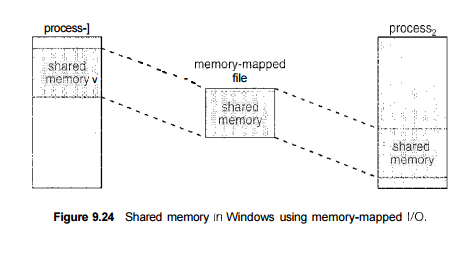 The producer then writes a message to shared memory. After that, a consumer process opens a mapping tp the shared-memory object and reads the message written by the consumer. To establish a memory-mapped file, a process first opens the file to be mapped with the CreateFileO function, which returns a HANDLE to the opened file. The process then creates a mapping of this file HANDLE using the CreateFileMappingO function. 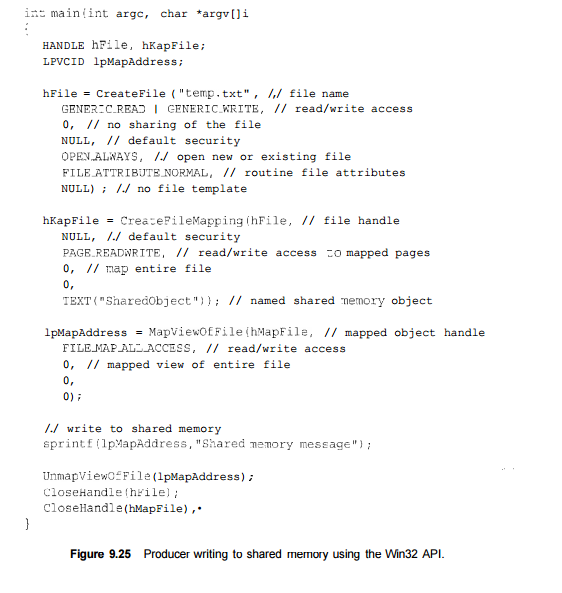 Once the file mapping is established, the process then establishes a view of the mapped file in its virtual address space with the MapViewOf FileC) function. The view of the mapped file represents the portion of the file being mapped in the virtual address space of the process —the entire file or only a portion of it may be mapped. We illustrate this sequence in the program shown in Figure 9.25. (We eliminate much of the error checking for code brevity.) The call to CreateFileMapping O creates a named shared-memory object calledSharedObject. The consumer process will communicate using this shared-memory segment by creating a mapping to the same named object. The producer then creates a view of the memory-mapped file in its virtual address space.

By passing the last three parameters the value 0, it indicates that the mapped view is the entire file. It could instead have passed values specifying an offset and size, thus creating a view containing only a subsection of the file. (It is important to note that the entire mapping may not be loaded into memory when the mapping is established. Rather, the mapped file may be demand-paged, thus bringing pages into memory only as they are accessed.) The MapViewDf Fil e () function returns a pointer to the shared-memory object; any accesses to this memory location are thus accesses to the memory-mapped file. In this instance, the producer process writes the message "Shared memory message" to shared memory. 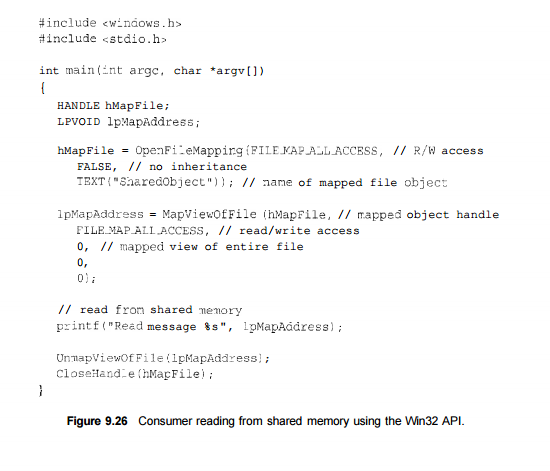 The consumer then reads from shared memory the message "Shared memory message" that was written by the producer process. Finally, both processes remove the view of the mapped file with a call to UnmapViewOfFileO. We provide a programming exercise at the end of this chapter using shared memory with memory mapping in the Win32 API

In the case of I/O, as mentioned in Section 1.2.1, each I/O controller includes registers to hold commands and the data being transferred. Usually, special I/O instructions allow data transfers between these registers and system memory. To allow more convenient access to I/O devices, many computer architectures provide memory-mapped I/O. In this case, ranges of memory addresses are set aside and are mapped to the device registers.

Reads and writes to these memory addresses cause the data to be transferred to and from the device registers. This method is appropriate for devices that have fast response times, such as video controllers. In the IBM PC, each location on the screen is mapped to a memory location. Displaying text on the screen is almost as easy as writing the text into the appropriate memory-mapped locations. Memory-mapped I/O is also convenient for other devices, such as the serial and parallel ports used to connect modems and printers to a computer.

The CPU transfers data through these kinds of devices by reading and w r riting a few device registers, called an I/O port. To send out a long string of bytes through a memory-mapped serial port, the CPU writes one data byte to the data register and sets a bit in the control register to signal that the byte is available. The device takes the data byte and then clears the bit in the control register to signal that it is ready for the next byte. Then the CPU can transfer the next byte. If the CPU uses polling to watch the control bit, constantly looping to see whether the device is ready, this method of operation is called programmed I/O (PIO). If the CPU does not poll the control bit, but instead receives an interrupt when the device is ready for the next byte, the data transfer is said to be interrupt driven.