Perhaps the foremost QoS issue with multimedia systems concerns preserving rate requirements. For example, if a client wishes to view a video compressed with MPEG-1, the quality of service greatly depends on the system's ability to deliver the frames at the required rate.. Our coverage of issues such as CPU- and disk-scheduling algorithms has focused on how these techniques can be used to better meet the quality-ofservice requirements of multimedia applications.

However, if the media file is being streamed over a network—perhaps the Internet—issues relating to how the network delivers the multimedia data can also significantly affect how QoS demands are met. In this section, we explore several network issues related to the unique demands of continuous media. Before we proceed, it is worth noting that computer networks in general —and the Internet in particular— currently do not provide network protocols that can ensure the delivery of data with timing requirements. (There are some proprietary protocols—notably those running on Cisco routers—that do allow certain network traffic to be prioritized to meet QoS requirements.

Such proprietary protocols are not generalized for use across the Internet and therefore do not apply to our discussion.) When data are routed across a network, it is likely that the transmission will encounter congestion, delays, and other network traffic issues—issues that are beyond the control of the originator of the data. For multimedia data with timing requirements, any timing issues must be synchronized between the end hosts: the server delivering the content and the client playing it back. One protocol that addresses timing issues is the real-time transport protocol (RTP).

RTP is an Internet standard for delivering real-time data, including audio and video. It can be used for transporting media formats such as MP3 audio files and video files compressed using MPEG. RTP does not provide any QoS guarantees; rather, it provides features that allow a receiver to remove jitter introduced by delays and congestion in the network. In following sections, we consider two other approaches for handling the unique requirements of continuous media.

In general, there are three methods for delivering content from a server to a client across a network:

• Unicasting, The server delivers the content to a single client. If the content is being delivered to more than one client, the server must establish a separate unicast for each client.

• Broadcasting. The server delivers the content to all clients, regardless of whether they wish to receive the content or not.

• Multicasting. The server delivers the content to a group of receivers who indicate they wish to receive the content; this method lies somewhere between unicasting and broadcasting. An issue with unicast delivery is that the server must establish a separate unicast session for each client. This seems especially wasteful for live real-time 726 Chapter 20 Multimedia Systems streaming, where the server must make several copies of the same content, one for each client. Obviously, broadcasting is not always appropriate, as not all clients may wish to receive the stream. (Suffice to say that broadcasting is typically only used across local area networks and is not possible across the public Internet.) Multicasting appears to be a reasonable compromise/ since it allows the server to deliver a single copy of the content to all clients indicating that they wish to receive it.

The difficulty with multicasting from a practical standpoint is that the clients must be physically close to the server or to intermediate routers that relay the content from the originating server. If the route from the server to the client must cross intermediate routers, the routers must also support multicasting. If these conditions are not met, the delays incurred during routing may result in violation of the timing requirements of the continuous media.

In the worst case, if a client is connected to an intermediate router that does not support multicasting, the client will be unable to receive the multicast stream at all! Currently, most streaming media are delivered across unicast channels; however, multicasting is used in various areas where the organization of the server and clients is known in advance.

For example, a corporation with several sites across a country may be able to ensure that all sites are connected to multicasting routers and are within reasonable physical proximity to the routers. The organization will then be able to deliver a presentation from the chief executive officer using multicasting.

We described some features of streaming media. As we noted there, users may be able to randomly access a media stream, perhaps rewinding or pausing, as they would with a VCR controller. How is this possible? To answer this question, let's consider how streaming media are delivered to clients. One approach is to stream the media from a standard web server using the hypertext transport protocol, or HTTP—the protocol used to deliver 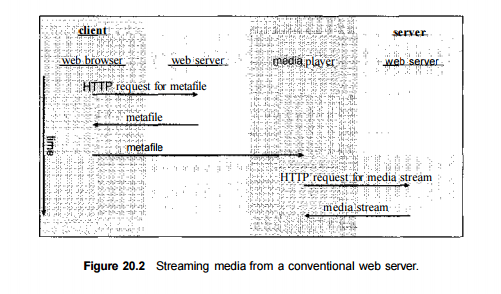 documents from a web server. Quite often, clients use a media player, such as QuickTime, RealPlayer, or Windows Media Player, to play back media streamed from a standard web server. Typically, the client first requests a metafile, which contains the location (possibly identified by a uniform resource locator, or URL) of the streaming media file. This metafile is delivered to the client's web browser, and the browser then starts the appropriate media player according to the type of media specified by the metafile. For example, a Real Audio stream would require the RealPlayer, while the Windows Media Player would be used to play back streaming Windows media.

One protocol designed for communication between streaming servers and media players is known as the real-time streaming protocol, or RTSP. The significant advantage RTSP provides over HTTP is a stateful connection between the client and the server, which allows the client to pause or seek to random positions in the stream during playback. Delivery of streaming media using RTSP is similar to delivery using HTTP (Figure 20.2) in that the meta file is delivered using a conventional web server. However, rather than using a web server, the streaming media is delivered from a streaming server using the RTSP protocol. The operation of RTSP is shown in Figure 20.3. RTSP defines several commands as part of its protocol; these commands are sent from a client to an RTSP streaming server. The commands include: 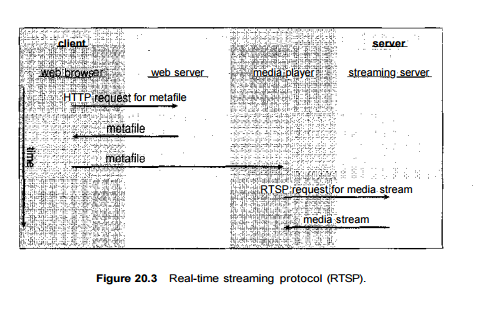 SETUP. The server allocates resources for a client session.

• PLAY. The server delivers a stream to a client session established from a SETUP command.

• PAUSE. The server suspends delivery of a stream but maintains the resources for the session.

• TEARDOWN. The server breaks down the connection and frees up resources allocated for the session. The commands can be illustrated with a state machine for the server, as shown in Figure 20.4. As you can see in the figure, the RTSP server may be in one of three states: init, ready, and playing.

Transitions between these three states are triggered when the server receives one of the RTSP commands from the client. Using RTSP rather than HTTP for streaming media offers several other advantages, but they are primarily related to networking issues and are therefore beyond the scope of this text. We encourage interested readers to consult the bibliographical notes at the end of this chapter for sources of further information.