Local-area networks emerged in the early 1970s as a substitute for large mainframe computer systems. For many enterprises, it is more economical to have a number of small computers, each with its own self-contained applications, than to have a single large system. Because each small computer is likely to need a full complement of peripheral devices (such as disks and printers), and because some form of data sharing is likely to occur in a single enterprise, it was a natural step to connect these small systems into a network.

LANs, as mentioned, are usually designed to cover a small geographical area (such as a single building or a few adjacent buildings) and are generally used in an office environment. All the sites in such systems are close to one another, so the communication links tend to have a higher speed and lower error rate than do their counterparts in wide-area networks.

High-quality (expensive) cables are needed to attain this higher speed and reliability. It is also possible to use the cable exclusively for data network traffic. Over longer distances, the cost of using high-quality cable is enormous, and the exclusive use of the cable tends to be prohibitive.

The most common links in a local-area network are twisted-pair and fiberoptic cabling. The most common configurations are multiaccess bus, ring, and star networks. Communication speeds range from 1 megabit per second, for networks such as AppleTalk, infrared, and the new Bluetooth local radio network, to 1 gigabit per second for gigabit Ethernet.

The FDDI network is token-based and runs at over 100 megabits per second. A typical LAN may consist of a number of different computers (from mainframes to laptops or PDAs), various shared peripheral devices (such as laser printers and magnetic-tape drives), and one or more gateways (specialized processors) that provide access to other networks (Figure 16.2). 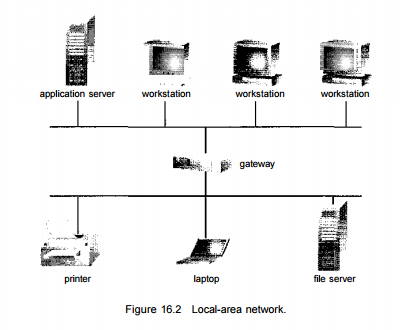 An Ethernet scheme is commonly vised to construct LANs. An Ethernet network has no central controller, because it is a multiaccess bus, so new hosts can be added easily to the network. The Ethernet protocol is defined by the IEEE 802.3 standard.

Wide-area networks emerged in the late 1960s, mainly as an academic research project to provide efficient communication among sites, allowing hardware and software to be shared conveniently and economically by a wide community of visers. The first WAN to be designed and developed was the Arpanet. Begun in 1968, the Arpanet has grown from a four-site experimental network to a worldwide network of networks, the Internet, comprising millions of computer systems. Because the sites in a WAN are physically distributed over a large geographical area, the communication links are, by default, relatively slow and unreliable. 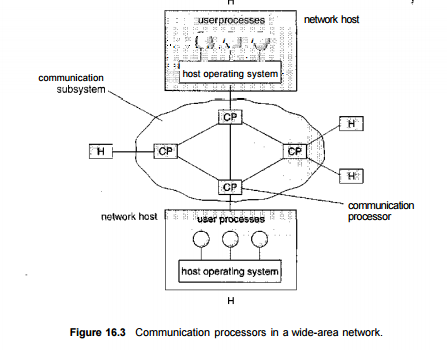 Typical links are telephone lines, leased (dedicated data) lines, microwave links, and satellite channels. These commvmication links are controlled by special communication processors (Figure 16.3), which are responsible for defining the interface through which the sites communicate over the network, as well as for transferring information among the various sites. For example, the Internet WAN provides the ability for hosts at geographj ically separated sites to communicate with one another.

The host computers ] typically differ from one another in type, speed, word length, operating system, i and so on. Hosts are generally on LANs, which are, in turn, connected to J the Internet via regional networks. The regional networks, such as NSFnet \ in the northeast United States, are interlinked with routers (Section 16.5.2) • to form the worldwide network. Connections between networks frequently j use a telephone-system service called Tl, which provides a transfer rate of 1.544 megabits per second over a leased line. For sites requiring faster Internet access, Tls are collected into multiple-Tl units that work in parallel to provide more throughput. For instance, a T3 is composed of 28 Tl connections and 5 has a transfer rate of 45 megabits per second. The routers control the path *

• each message takes through the net. This routing may be either dynamic, to : increase communication efficiency, or static, to reduce security risks or to allow

• communication charges to be computed.

The UNIX news network, UUCP, allows systems to communicate with each other at predetermined times, via modems, to exchange messages. The messages are then routed to other nearby systems and in this way either are propagated to all hosts on the network (public messages) or are transferred to their destination (private messages). WANs are generally slower than LANs; their transmission rates range from 1,200 bits per second to over 1 megabit per second. UUCP has been superseded by PPP, the point-to-point protocol. PPP functions over modem connections, allowing home computers to be fully connected to the Internet.