The sites in a distributed system can be connected physically in a variety of ways. Each configuration has advantages and disadvantages. We can compare the configurations by using the following criteria:

• Installation cost. The cost of physically linking the sites in the system

• Communication cost. The cost in time and money to send a message from site A to site B 16.4 Network Topology 621

• Availability. The extent to which data can be accessed despite the failure of some links or sites 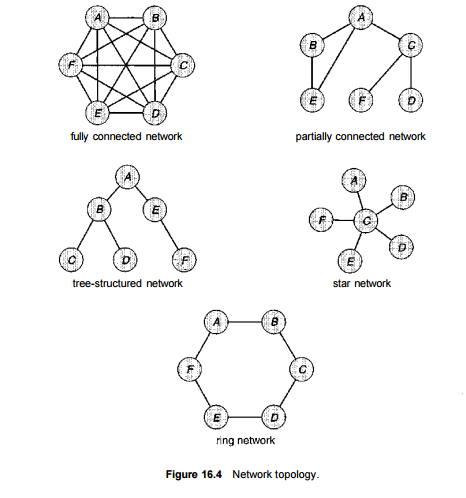 The various topologies are depicted in Figure 16.4 as graphs whose nodes correspond to sites. An edge from node A to node B corresponds to a direct communication link between the two sites. In a fully connected network, each site is directly connected to every other site.

If a communication link fails, messages that would have been transmitted across the link must be rerouted. In some cases, another route through the network may be found, so that the messages are able to reach their destination. In other cases, a failure may mean that no connection exists between some pairs of sites. When a system is split into two (or more) subsystems that lack any connection between them, it is partitioned. Under this definition, a subsystem (or partition) may consist of a single node. The various partially connected network types include tree-structured networks, ring networks, and star networks, as shown in Figure 16.4.

They have different failure characteristics and installation and communication costs. Installation and communication costs are relatively low for a tree-structured network. However, the failure of a single link in such a network can result in the network's becoming partitioned. In a ring network, at least two links must fail for partition to occur. Thus, the ring network has a higher degree of availability than does a tree-structured network. However, the communication cost is high, since a message may have to cross a large number of links.

In a star network, the failure of a single link results in a network partition, but one of the partitions has only a single site. Such a partition can be treated as a single-site failure. The star network also has a low communication cost, since each site is at most two links away from every other site. However, if the central site fails, every site in the system becomes disconnected.