Home >  finance and acounting >  NONRECURRING ITEMS IN OTHER SELECTED NOTES

NONRECURRING ITEMS IN OTHER SELECTED NOTES

Typically, most material nonrecurring items will have been located by proceeding through the first six steps of the search sequence in Exhibit 2.3. However, some additional nonrecurring items may be located in other notes. Nonrecurring items can surface in virtually any note to the financial statements. We will now discuss three selected notes that frequently contain other nonrecurring items: notes on foreign exchange, restructuring, and quarterly and segment financial data. Recall that inventory, income tax, and other income and expense notes have already been discussed in steps 3 to 5.

Foreign-currency gains and losses can also result from the use of various currency contracts, such as forwards, futures, options, and swaps, entered into for both hedging and speculation. It is not uncommon to observe foreign exchange gains and losses year after year in a company’s income statement. The amounts of these items, however, as well as whether they are gains or losses are often very irregular, making them candidates for nonrecurring classification.

To illustrate, a portion of a note titled “foreign currency translation” from the 1993 annual report of Dibrell Brothers Inc. follows:

The gains and losses disclosed above appeared as adjustments, reflecting either their noncash or nonoperating character, in the operating activities of Dibrell’s statement of cash flows. The effect of the 1993 currency exchange gain is also referenced in Dibrell’s MD&A as part of the comparison of earnings in 1993 to those in 1992.

While appearing in each of the past three years, Dibrell’s foreign currency gains and losses were far from stable—two years of small losses followed by a year with a large gain. One way to gauge the significance of these exchange items is to compute their contribution to the growth in income before income taxes, extraordinary items, and cumulative effect of accounting changes. This computation is outlined for 1993 in Exhibit 2.24. 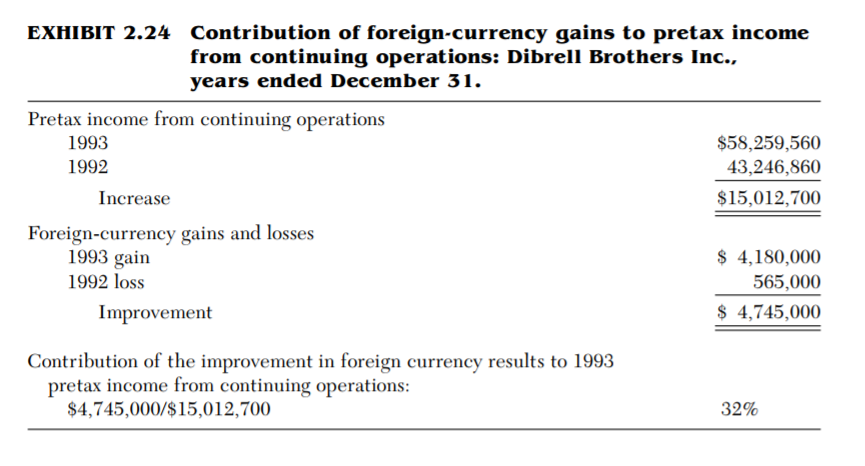 Dibrell’s currency gain made a major contribution to its profit growth in 1993. Hence, a separate note to the financial statements is devoted to its discussion and disclosure. Following the recommended search sequence, these items would be identified at step 2, the statement of cash flows, or step 6, MD&A. If search failures occur at these steps, then examination of the foreign exchange note would be a backup to ensure that the important information contained in this note is available in assessing Dibrell’s 1993 performance.

The past decade has been dominated by the corporate equivalent of a diet program. Call it streamlining, downsizing, rightsizing, redeploying, or strategic repositioning—the end result is that firms have been recording nonrecurring charges of a size and frequency that are unprecedented in our modern economic history. The size and scope of these activities ensure that they leave their tracks throughout the statements and notes. Notes on restructuring charges are among the most common transaction-specific notes. The Fairchild Corporation’s restructuring note is provided in Exhibit 2.25.

A number of different items make up the Fairchild restructuring charge. Included are severance benefits, asset write-offs, and integration costs. Fairchild declares that the charges recorded in fiscal 2000 “were the direct result of formal plans to move equipment, close plants and to terminate employees.” This point is made to counter criticism that some restructuring charges go well beyond restructuring activities to accrue unrelated costs plus costs that should properly be charged against future operations.

A tendency to over-accrue restructuring charges has a number of possible explanations. First, firms facing a poor year for profits may decide to take a “big 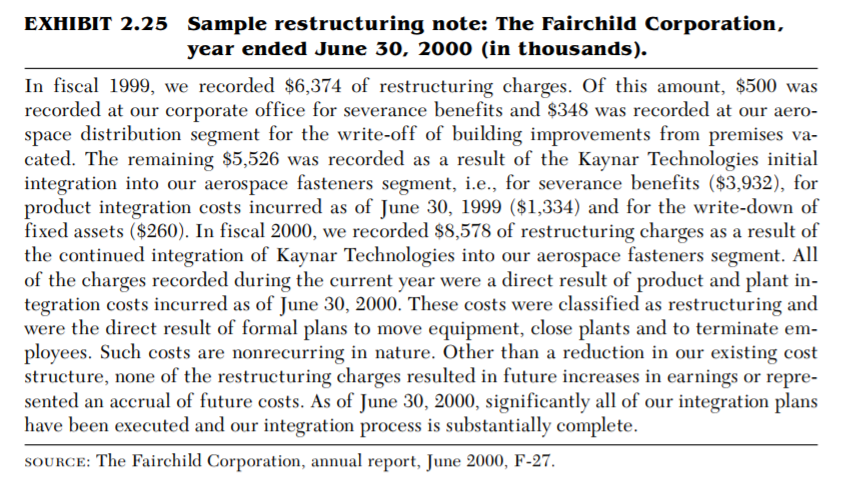 bath” and recognize excessive amounts of restructuring costs. The assumption is that simply increasing a current-period loss will not have additional negative consequences for share values. Moreover, by writing off costs currently, future profits are relieved of this burden and will therefore look stronger.

Restructuring charges have attracted the attention of the SEC. Arthur Levitt, chairman of the SEC, has registered strong objections against the use of overstated restructuring accruals to increase the earnings of subsequent periods. The chairman refers to these excessive reserves as “cookie jar” reserves.

1. On a separate line item within the operating income section of the income statement (step one in the nonrecurring items search sequence).

2. Within the operating activities section of the statement of cash flows, with the noncash portion of the charges added back to net earnings or loss (step 2 in the search sequence).

3. Disclosed in the section of the MD&A dealing with earnings (step 6 in the search sequence).

4. Disclosed in a separate note to the financial statements on restructuring charges (step 7[d]).

5. Disclosed in a note dealing with segment reporting (step 7[f] in the search sequence).

Quarterly and segmental financial disclosures frequently reveal nonrecurring items. In the case of segment disclosures, the goal is to aid in the evaluation of profitability trends by segments. The Fairchild Corporation discussion (Exhibit 2.25) disclosed its restructuring charges in the reports of segment results.

Quarterly financial data of Office Depot Inc. disclosed inventory write downs of $56.1 million for the third quarter of 1999, a store closure and relocation charge of $46.4 million in the third quarter of 1999, and a $6.0 million reversal of the charge in the fourth quarter of 1999. Office Depot also disclosed merger and restructuring charges as part of the reporting for its segments. To complete this review of selected financial statement notes, we discuss one last item before illustrating the summarization of information on nonrecurring items and the development of the sustainable earnings series. This topic is the most recent standard-setting activity with a focus on the fundamental structure and content of the income statement.