A system as large and complex as a modern operating system must be engineered carefully if it is to function properly and be modified easily. A common approach is to partition the task into small components rather than have one monolithic system. Each of these modules should be a well-defined portion of the system, with carefully defined inputs, outputs, and functions.

Many commercial systems do not have well-defined structures. Frequently, such operating systems started as small, simple, and limited systems and then grew beyond their original scope. MS-DOS is an example of such a system. It was originally designed and implemented by a few people who had no idea that it would become so popular. It was written to provide the most functionality in the least space, so it was not divided into modules carefully. In MS-DOS, the interfaces and levels of functionality are not well separated. For instance, application programs are able to access the basic I/O routines to write directly to the display and disk drives. Such freedom leaves MS-DOS vulnerable to errant (or malicious) programs, causing entire system crashes when user programs fail. Of course, MS-DOS was also limited by the hardware of its era. Because the Intel 8088 for which it was written provides no dual mode and no hardware protection, the designers of MS-DOS had no choice but to leave the base hardware accessible. Another example of limited structuring is the original UNIX operating system.

UNIX is another system that initially was limited by hardware functionality. It consists of two separable parts: the kernel and the system programs. The kernel is further separated into a series of interfaces and device drivers, which have been added and expanded over the years as UNIX has evolved. Everything below the system call interface and above the physical hardware is the kernel. The kernel provides the file system, CPU scheduling, memory management, and other operating-system functions through system calls. Taken in sum, that is an enormous amount of functionality to be combined into one level. This monolithic structure was difficult to implement and maintain.

With proper hardware support, operating systems can be broken into pieces that are smaller and more appropriate than those allowed by the original MS-DOS or UNIX systems. The operating system can then retain much greater control over the computer and over the applications that make use of that computer. Implementers have more freedom in changing the inner workings of the system and in creating modular operating systems. Under the top down approach, the overall functionality and features are determined and are separated into components. Information hiding is also important, because it leaves programmers free to implement the low-level routines as they see fit, provided that the external interface of the routine stays unchanged and that the routine itself performs the advertised task.

A system can be made modular in many ways. One method is the layered approach, in which the operating system is broken up into a number of layers (levels). The bottom layer (layer 0) is the hardware; the highest (layer N) is the user interface. An operating-system layer is an implementation of an abstract object made up of data and the operations that can manipulate those data. A typical operating-system layer—say, layer M—consists of data structures and a set of routines that can be invoked by higher-level layers. Layer M, in turn, can invoke operations on lower-level layers. The main advantage of the layered approach is simplicity of construction and debugging. The layers are selected so that each uses functions (operations) and services of only lower-level layers. 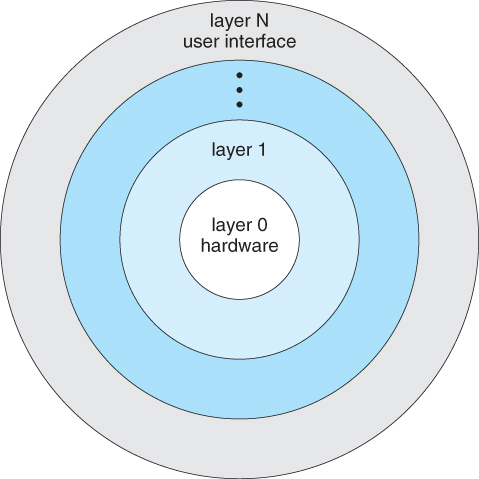 This approach simplifies debugging and system verification. The first layer can be debugged without any concern for the rest of the system, because, by definition, it uses only the basic hardware (which is assumed correct) to implement its functions. Once the first layer is debugged, its correct functioning can be assumed while the second layer is debugged, and so on. If an error is found during the debugging of a particular layer, the error must be on that layer, because the layers below it are already debugged. Thus, the design and implementation of the system is simplified. Each layer is implemented with only those operations provided by lower level layers.

A layer does not need to know how these operations are implemented; it needs to know only what these operations do. Hence, each layer hides the existence of certain data structures, operations, and hardware from higher-level layers. The major difficulty with the layered approach involves appropriately defining the various layers. Because a layer can use only lower-level layers, careful planning is necessary. For example, the device driver for the backing store (disk space used by virtual-memory algorithms) must be at a lower level than the memory-management routines, because memory management requires the ability to use the backing store. Other requirements may not be so obvious. The backing-store driver would normally be above the CPU scheduler, because the driver may need to wait for I/O and the CPU can be rescheduled during this time. However, on a large system, the CPU scheduler may have more information about all the active processes than can fit in memory.

Therefore, this information may need to be swapped in and out of memory, requiring the backing-store driver routine to be below the CPU scheduler. A final problem with layered implementations is that they tend to be less efficient than other types. For instance, when a user program executes an I/O operation, it executes a system call that is trapped to the I/O layer, which calls the memory-management layer, which in turn calls the CPU-scheduling layer, which is then passed to the hardware. At each layer, the parameters may be modified, data may need to be passed, and so on. Each layer adds overhead to the system call; the net result is a system call that takes longer than does one on a nonlayered system. These limitations have caused a small backlash against layering in recent years. Fewer layers with more functionality are being designed, providing most of the advantages of modularized code while avoiding the difficult problems of laver definition and interaction.

We have already seen that as UNIX expanded, the kernel became large and difficult to manage. In the mid-1980s, researchers at Carnegie Mellon University developed an operating system called Mach that modularized the kernel using the microkernel approach. This method structures the operating system by removing all nonessential components from the kernel and implementing them as system and user-level programs. The result is a smaller kernel. There is little consensus regarding which services should remain in the kernel and which should be implemented in user space. Typically, however, microkernels provide minimal process and memory management, in addition to a communication facility. The main function of the microkernel is to provide a communication facility between the client program and the various services that are also running in user space

The QNX microkernel provides services for message passing and process scheduling. It also handles low-level network communication and hardware interrupts. All other services in QNX are provided by standard processes that run outside the kernel in user mode. Unfortunately, microkernels can suffer from performance decreases due to increased system function overhead. Consider the history of Windows NT. The first release had a layered microkernel organization. However, this version delivered low performance compared with that of Windows 95. Windows NT 4.0 partially redressed the performance problem by moving layers from user space to kernel space and integrating them more closely. By the time Windows XP was designed, its architecture was more monolithic than microkernel.

Perhaps the best current methodology for operating-system design involves using object-oriented programming techniques to create a modular kernel. Here, the kernel has a set of core components and dynamically links in additional services either during boot time or during run time. Such a strategy uses dynamically loadable modules and is common in modern implementations of UNIX, such as Solaris, Linux, and Mac OS X. For example, the Solaris operating system structure  is organized around a core kernel with seven types of loadable kernel modules: 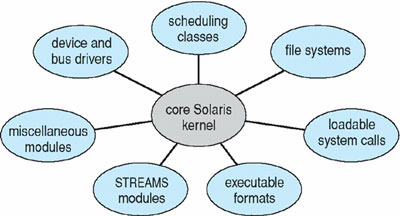 Such a design allows the kernel to provide core services yet also allows certain features to be implemented dynamically. For example, device and bus drivers for specific hardware can be added to the kernel, and support for different file systems can be added as loadable modules.

The overall result resembles a layered system in that each kernel section has defined, protected interfaces; but it is more flexible than a layered system in that any module can call any other module. Furthermore, the approach is like the microkernel approach in that the primary module has only core functions and knowledge of how to load and communicate with other modules; but it is more efficient, because modules do not need to invoke message passing in order to communicate. The Apple Macintosh Mac OS X operating system uses a hybrid structure. Mac OS X (also known as Danvin) structures the operating system using a layered technique where one layer consists of the Mach microkernel. The top layers include application environments and a set of services providing a graphical interface to applications.

Below these layers is the kernel environment, which consists primarily of the Mach microkernel and the BSD kernel. Mach provides memory management; support for remote procedure calls (RPCs) and interprocess communication (IPC) facilities, including message passing; and thread scheduling. The BSD component provides a BSD command line interface, support for networking and file systems, and an implementation of POSIX APIs, including Pthreads. In addition to Mach and BSD, the kernel environment provides an I/O kit for development of device drivers and dynamically loadable modules (which Mac OS X refers to as kernel extensions). As shown in the figure, applications and common services can make use of either the Mach or BSD facilities directly.