The processes in most systems can execute concurrently, and they may be created and deleted dynamically. Thus, these systems must provide a mechanism for process creation and termination. In this section, we explore the mechanisms involved in creating processes and illustrate process creation on UNIX and Windows systems

A process may create several new processes, via a create-process system call, during the course of execution. The creating process is called a parent process, and the new processes are called the children of that process. Each of these new processes may in turn create other processes, forming a tree of processes. Most operating systems (including UNIX and the Windows family of operating systems) identify processes according to a unique process identifier (or pid), which is typically an integer number. Figure  illustrates a typical process tree for the Solaris operating system, showing the name of each process and its pid.

In Solaris, the process at the top of the tree is the sched process, with pid of 0. The sched process creates several children processes—including pageout and f sf lush. These processes are responsible for managing memory and file systems. The sched process also creates the ini t process, which serves as the root parent process for all user processes. In Figure , we see two children of ini t — inetd and dtlogin. inetd is responsible for networking services such as telne t and ftp; dtlogin is the process representing a user login screen. When a user logs in, dtlogin creates an X-windows session (Xsession), which in turns creates the sdt_shel process. Below sdt_shel, a user's command-line shell—the C-shell or csh—is created. It is this commandline interface where the user then invokes various child processes, such as the Is and cat commands. We also see a csh process with pid of 7778 representing a user who has logged onto the system using telnet. This user has started the Netscape browser (pid of 7785) and the emacs editor (pid of 8105).

On UNIX, a listing of processes can be obtained using the ps command. For example, entering the command ps -e l will list complete information for all processes currently active in the system. It is easy to construct a process tree similar to what is shown in Figure  by recursively tracing parent processes all the way to the ini t process. In general, a process will need certain resources (CPU time, memory, files, I/O devices) to accomplish its task. When a process creates a subprocess, that subprocess may be able to obtain its resources directly from the operatiiig system, or it may be constrained to a subset of the resources of the parent process.

The parent may have to partition its resources among its children, or it may be able to share some resources (such as memory or files) among several of its children. Restricting a child process to a subset of the parent's resources prevents any process from overloading the system by creating too many subprocesses. In addition to the various physical and logical resources that a process obtains when it is created, initialization data (input) may be passed along by the parent process to the child process. For example, consider a process whose function is to display the contents of a file—say, img.jpg—on the screen of a terminal. When it is created, it will get, as an input from its parent process, the name of the file img.jpg, and it will use that file name, open the file, and write the contents out. It may also get the name of the output device. Some operating systems pass resources to child processes. On such a system, the new process may get two open files, img.jpg and the terminal device, and may simply transfer the datum between the two. When a process creates a new process, two possibilities exist in terms of execution:

1. The parent continues to execute concurrently with its children.

2. The parent waits until some or all of its children have terminated.

There are also two possibilities in terms of the address space of the new process:

1. The child process is a duplicate of the parent process (it has the same program and data as the parent).

2. The child process has a new program loaded into it. To illustrate these differences, let's first consider the UNIX operating system. In UNIX, as we've seen, each process is identified by its process identifier. 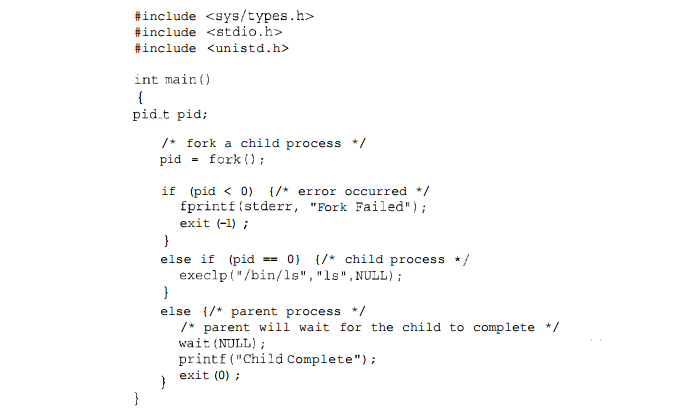 A new process is created by the forkO system call. The new process consists of a copy of the address space of the original process. This mechanism allows the parent process to communicate easily with its child process. Both processes (the parent and the child) continue execution at the instruction after the f ork(), with one difference: The return code for the forkO is zero for the new (child) process, whereas the (nonzero) process identifier of the child is returned to the parent. Typically, the execO system call is used after a forkO system call by one of the two processes to replace the process's memory space with a new program. The exec () system call loads a binary file into memory (destroying the memory image of the program containing the execO system call) and starts its execution. In this manner, the two processes are able to communicate and then go their separate ways. The parent can then create more children; or, if it has nothing else to do while the child runs, it can issue a wait () system call to move itself off the ready queue until the termination of the child. 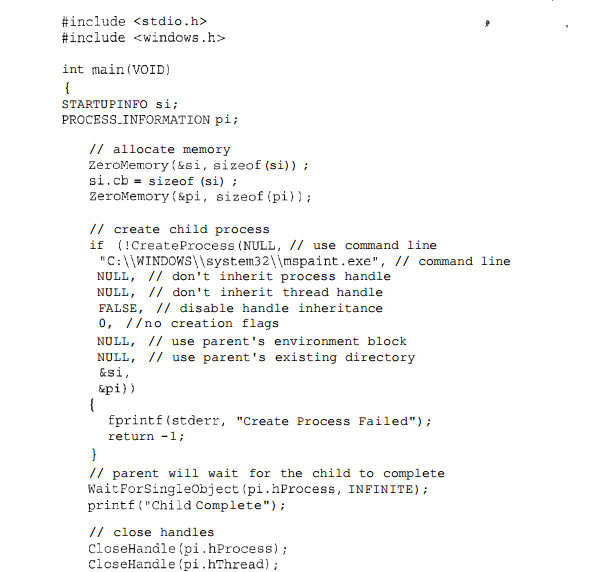 Two parameters passed to CreateProcess () are instances of the STARTUPINFO and PROCESSJNFORMATION structures. STARTUPINFO specifies many properties of the new process, such as window size and appearance and handles to standard input and output files. The PROCESSJNFORMATION structure contains a handle and the identifiers to the newly created process and its thread. We invoke the ZeroMemoryO function to allocate memory for each of these structures before proceeding with CreateProcess (). The first two parameters passed to CreateProcess () are the application name and command line parameters. If the application name is NULL (which in this case it is), the command line parameter specifies the application to load. In this instance we are loading the Microsoft Windows mspaint.exeapplication.

Beyond these two initial parameters, we use the default parameters for inheriting process and thread handles as well as specifying no creation flags. We also use the parent's existing environment block and starting directory. Last, we provide two pointers to the STARTUPINFO and PROCESS-INFORMATION structures created at the beginning of the program.The parent process waits for the child to complete by invoking the waitO system call. The equivalent of this in Win32 is WaitForSingleObj ect (), which is passed a handle of the child process—pi . hProcess— that it is waiting for to complete. Once the child process exits, control returns from the WaitForSingleOb j ect () function in the parent process.

A process terminates when it finishes executing its final statement and asks the operating system to delete it by using the exit () system call. At that point, the process may return a status value (typically an integer) to its parent process (via the wait() system call). All the resources of the process—including physical and virtual memory, open files, and I/O buffers—are deallocated by the operating system. Termination can occur in other circumstances as well. A process can cause the termination of another process via an appropriate system call (for example, TerminateProcessO in Win32). Usually, such a system call can be invoked only by the parent of the process that is to be terminated. Otherwise, users could arbitrarily kill each other's jobs. Note that a parent needs to know the identities of its children. Thus, when one process creates a new process, the identity of the newly created process is passed to the parent. A parent may terminate the execution of one of its children for a variety of reasons, such as these:

• The child has exceeded its usage of some of the resources that it has been allocated. (To determine whether this has occurred, the parent must have a mechanism to inspect the state of its children.)

• The task assigned to the child is no longer required.

• The parent is exiting, and the operating system does not allow a child to continue if its parent terminates. Some systems, including VMS, do not allow a child to exist if its parent has terminated. In such systems, if a process terminates (either normally or abnormally), then all its children must also be terminated. This phenomenon, referred to as cascading termination, is normally initiated by the operating system.

To illustrate process execution and termination, consider that, in UNIX, we can terminate a process by using the exitQ system call; its parent process may wait for the termination of a child process by using the waitO system call. The wait () system call returns the process identifier of a terminated child so that the parent can tell which of its possibly many children has terminated. If the parent terminates, however, all its children have assigned as their new parent the ini t process. Thus, the children still have a parent to collect their status and execution statistics.