Binary codes for decimal digits require a minimum of four bits. Numerous different codes can be formulated by arranging four or more bits in 10 distinct possible combinations. A few possibilities are shown in Table 3-6. 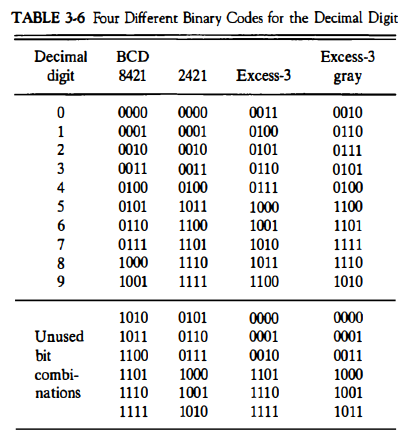 The BCD (binary-coded decimal) has been introduced before. It uses a straight assignment of the binary equivalent of the digit. The six unused bit combinations listed have no meaning when BCD is used, just as the letter H has no meaning when decimal digit symbols are written down. For example, saying that 1001 1110 is a decimal number in BCD is like saying that 9H is a decimal number in the conventional symbol designation. Both cases contain an invalid symbol and therefore designate a meaningless number.

excess-3 code: The excess-3 code is a decimal code that has been used in older computers. This is an unweighted code. Its binary code assignment is obtained from the corresponding BCD equivalent binary number after the addition of binary 3 (0011).

From Table 3-5 we note that the Gray code is not suited for a decimal code if we were to choose the first 10 entries in the table. This is because the transition from 9 back to 0 involves a change of three bits (from 1101 to 0000). To overcome this difficulty, we choose the 10 numbers starting from the third entry 0010 up to the twelfth entry 1010. Now the transition from 1010 to 0010 involves a change of only one bit. Since the code has been shifted up three numbers, it is called the excess-3 Gray. This code is listed with the other decimal codes in Table 3-6.