Do users think of memory as a linear array of bytes, some containing instructions and others containing data? Most people would say no. Rather, users prefer to view memory as a collection of variable-sized segments., with no necessary ordering among segments (Figure 8.18). 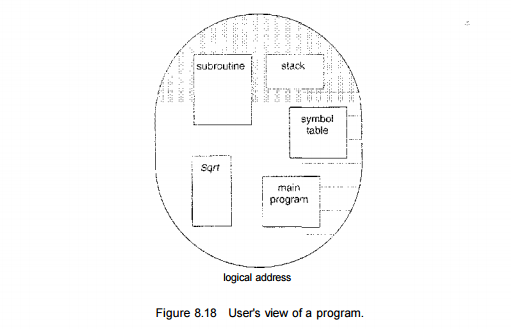 Consider how you think of a program when you are writing it. You think of it as a main program with a set of methods, procedures, or functions. It may also include various data structures: objects, arrays, stacks, variables, and so on. Each of these modules or data elements is referred to by name. You talk about "the stack," "the math library," ''the main program," without caring what addresses in memory these elements occupy You are not concerned with whether the stack is stored before or after the Sqrt () function. Each of these segments is of variable length; the length is intrinsically defined by the purpose of the segment in the program. Elements within a segment are identified by their offset from the beginning of the segment: the first statement of the program, the seventh stack frame entry in the stack, the fifth instruction of the Sqrt (), and so on. Segmentation is a memory-management scheme that supports this user view of memory. A logical address space is a collection of segments. Each segment has a name and a length. The addresses specify both the segment name and the offset within the segment. The user therefore specifies each address by two quantities: a segment name and an offset. (Contrast this scheme with the paging scheme, in which the user specifies only a single address, which is partitioned by the hardware into a page number and an offset, all invisible to the programmer.) For simplicity of implementation, segments are numbered and are referred to by a segment number, rather than by a segment name. Tluis, a logical address consists of a two tuple:

Normally, the user program is compiled, and the compiler automatically constructs segments reflecting the input program. A C compiler might create separate segments for the following:

3. The heap, from which memory is allocated

4. The stacks used, by each thread

Libraries that are linked in during compile time might be assigned separate segments. The loader would take all these segments and assign them segment numbers. 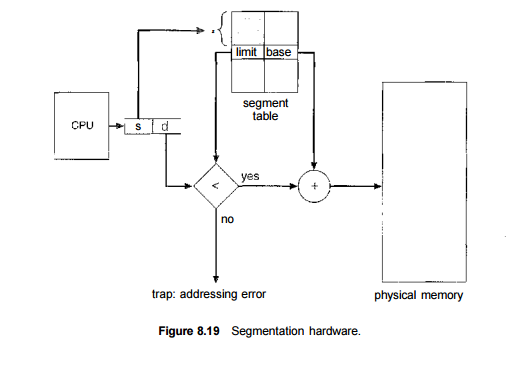 As an example, consider the situation shown in Figure 8.20. We have five segments numbered from 0 through 4. The segments are stored in physical memory as shown. 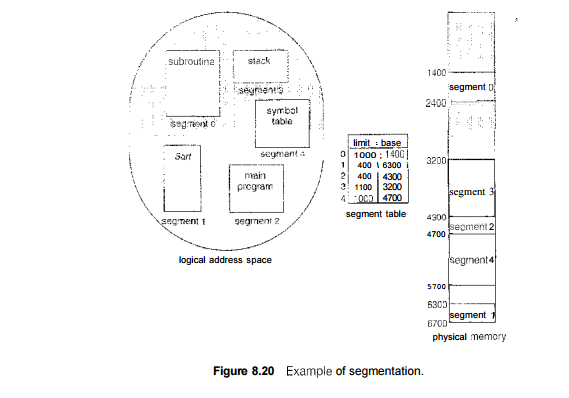