System calls provide an interface to the services made available by an operating system. These calls are generally available as routines written in C and C++, although certain low-level tasks (for example, tasks where hardware must be accessed directly), may need to be written using assembly-language instructions.

Before we discuss how an operating system makes system calls available, let's first use an example to illustrate how system calls are used: writing a simple program to read data from one file and copy them to another file. The first input that the program will need is the names of the two files: the input file and the output file. These names can be specified in many ways, depending on the operating-system design. One approach is for the program to ask the user for the names of the two files. In an interactive system, this approach will require a sequence of system calls, first to write a prompting message on the screen and then to read from the keyboard the characters that define the two files. On mouse-based and icon-based systems, a menu of file names is usually displayed in a window. The user can then use the mouse to select the source name, and a window can be opened for the destination name to be specified. This sequence requires many I/O system calls. 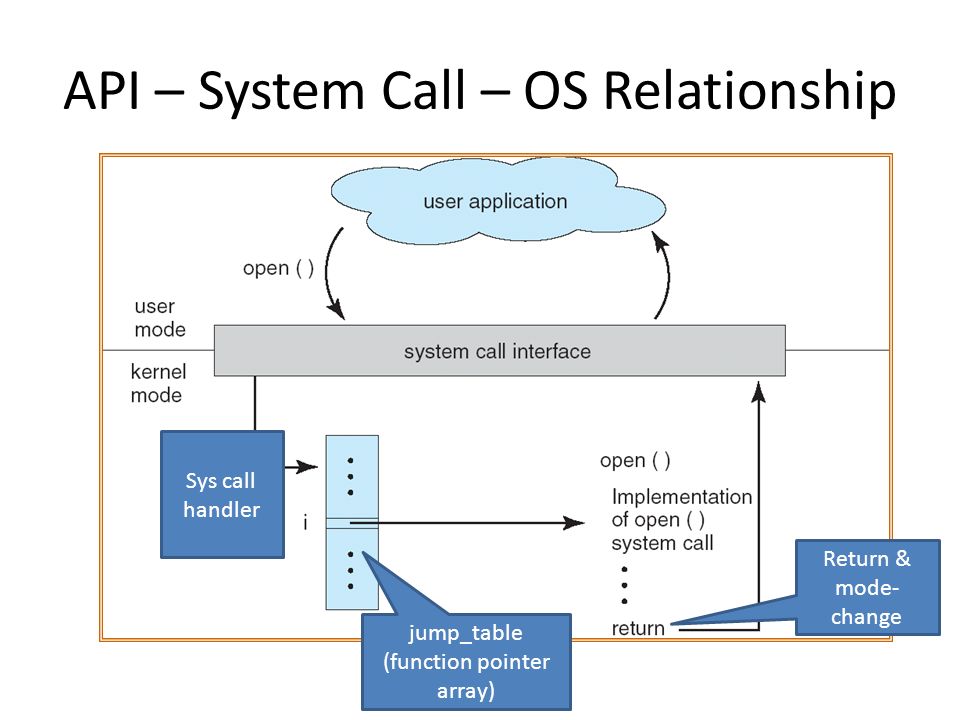 Now that both files are set up, we enter a loop that reads from the input file (a system call) and writes to the output file (another system call). Each read and write must return status information regarding various possible error conditions. On input, the program may find that the end of the file has been reached or that there was a hardware failure in the read (such as a parity error). The write operation may encounter various errors, depending on the output device (no more disk space, printer out of paper, and so on).

Finally, after the entire file is copied, the program may close both files (another system call), write a message to the console or window (more system calls), and finally terminate normally (the final system call). As we can see, even simple programs may make heavy use of the operating system. Frequently, systems execute thousands of system calls per second.

Note that the system-call names used throughout this text are generic examples. Each operating system has its own name for each system call. Behind the scenes, the functions that make up an API typically invoke the actual system calls on behalf of the application programmer.

For example, the Win32 function CreateProcess() (which unsurprisingly is used to create a new process) actually calls the NTCreateProcess() system call in the Windows kernel. Why would an application programmer prefer programming according to an API rather than invoking actual system calls? There are several reasons for doing so.

One benefit of programming according to an API concerns program portability: An application programmer designing a program using an API can expect her program to compile and run on any system that supports the same API (although in reality, architectural differences often make this more difficult than it may appear). Furthermore, actual system calls can often be more detailed and difficult to work with than the API available to an application programmer. 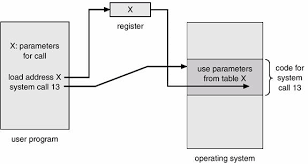 Regardless, there often exists a strong correlation between invoking a function in the API and its associated system call within the kernel. In fact, many of the POSIX and Win32 APIs are similar to the native system calls provided by the UNIX, Linux, and Windows operating systems. The run-time support system (a set of functions built into libraries included with a compiler) for most programming languages provides a system-call interface that serves as the link to system calls made available by the operating system. The system-call interface intercepts function calls in the API and invokes the necessary system call within the operating system.

Thus, most of the details of the operating-system interface are hidden from the programmer by the API and are managed by the run-time support library. Often, more information is required than simply the identity of the desired system call. The exact type and amount of information vary according to the particular operating system and call. For example, to get input, we may need to specify the file or device to use as the source, as well as the address and length of the memory buffer into which the input should be read. Of course, the device or file and length may be implicit in the call. Three general methods are used to pass parameters to the operating system. The simplest approach is to pass the parameters in registers. In some cases, however, there may be more parameters than registers. In these cases, the parameters are generally stored in a block, or table, in memory, and the address of the block is passed as a parameter in a register . This is the approach taken by Linux and Solaris. Parameters also can be placed, or pushed, onto the stack by the program and popped off the stack by the operating system. Some operating systems prefer the block or stack method, because those approaches do not limit the number or length of parameters being passed.