The sustainable earnings worksheet is shown in Exhibit 2.26. Detailed instructions on completing the worksheet follow:

1. Net income or loss is recorded on the top line of the worksheet.

2. All identified items of nonrecurring expense or loss, which were included in the income statement on a pretax basis, are recorded on the “add” lines provided. Where a prelabeled line is not listed in the worksheet, a descriptive phrase should be recorded on one of the “other” lines and the amounts recorded there. In practice, the process of locating nonrecurring items and recording them on the worksheet would take place at the same time. However, effective use of the worksheet calls for the background provided earlier in the chapter. This explains the separation of these steps in this chapter. 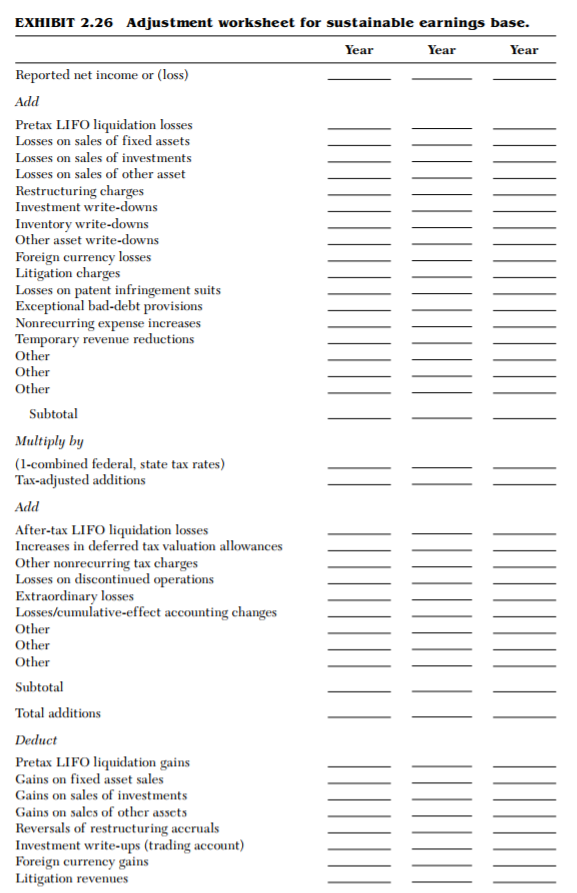 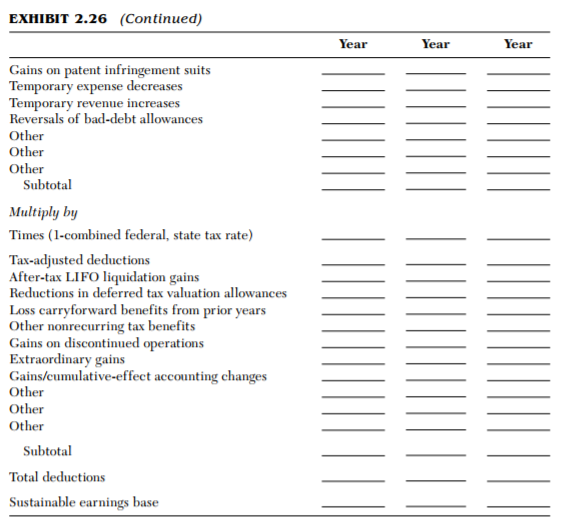 3. When all pretax nonrecurring expenses and losses have been recorded, subtotals should be computed. These subtotals are then multiplied times 1 minus a representative combined federal, state, and foreign income-tax rate. This puts these items on an after-tax basis so that they are stated on the same basis as net income or net loss.

4. The results from step 3 should be recorded on the line titled “tax-adjusted additions.”

5. All after-tax nonrecurring expenses or losses are next added separately. These items are either tax items or special income-statement items that are disclosed on an after-tax basis under GAAP, such as discontinued operations, extraordinary items, or the cumulative effect of accounting changes. The effects of LIFO liquidations are sometimes presented pretax and sometimes after-tax. Note that a line item is provided for the effect of LIFO liquidations in both the pretax and after-tax additions section of the worksheet.

6. Changes in deferred-tax-valuation allowances are recorded in the taxadjusted additions (or deductions) section only if such changes affected net income or net loss for the period. Evidence of an income-statement impact will usually take the form of an entry in the income tax ratereconciliation schedule.

7. The next step is to subtotal the entries for after-tax additions and then combine this subtotal with the amount labeled “tax adjusted additions.” The result is then recorded on the “total additions” line at the bottom of the first page of the worksheet.

+
Ans: The work to this point has laid out important background but is not complete. Still required is a device to assist in summarizing information discovered on nonrecurring items so that new measures of sustainable earnings can be developed. We devote the balance of this chapter to introducing a worksheet specially designed to summarize nonrecurring items and illustrating its development and interpretation in a case study. view more..
+
Ans: The last section in the AK Steel Holdings income statement in Exhibit 2.9 is devoted to the reporting of other comprehensive income. This is a relatively new feature of the income statement and was introduced with the issuance by the FASB of SFAS No. 130, Reporting Comprehensive Income.44 The goal of the standard is to expand the concept of income to included selected items of nonrecurring revenue, gain, expense and loss. Under the new standard, traditional net income is combined with a new component, “other comprehensive income,” to produce a new bottom line, “comprehensive income.” view more..
+
Ans: Typically, most material nonrecurring items will have been located by proceeding through the first six steps of the search sequence in Exhibit 2.3. However, some additional nonrecurring items may be located in other notes. Nonrecurring items can surface in virtually any note to the financial statements. We will now discuss three selected notes that frequently contain other nonrecurring items: notes on foreign exchange, restructuring, and quarterly and segment financial data. Recall that inventory, income tax, and other income and expense notes have already been discussed in steps 3 to 5. view more..
+
Ans: The sustainable earnings worksheet is shown in Exhibit 2.26. Detailed instructions on completing the worksheet follow: 1. Net income or loss is recorded on the top line of the worksheet. 2. All identified items of nonrecurring expense or loss, which were included in the income statement on a pretax basis, are recorded on the “add” lines provided. view more..
+
Ans: The sustainable earnings base provides earnings information from which the distorting effects of nonrecurring items have been removed. Some analysts refer to such revised numbers as representing “core” or “underlying” earnings. Sustainable is used here in the sense that earnings devoid of nonrecurring items of revenue, gain, expense, and loss are much more likely to be maintained in the future, other things equal. Base implies that sustainable earnings provide the most reliable foundation or starting point for projections of future results. The more reliable such forecasts become, the less the likelihood that earnings surprises will result. Again, Phillips Petroleum captures the essence of nonrecurring items in the following: view more..
+
Ans: This case example of using the SEB worksheet is based on the 1997 annual report of Baker Hughes Inc. and its results for 1995 to 1997. The income statement, statement of cash flows, management’s discussion and analysis of results of operations (MD&A), and selected notes are in Exhibits 2.27 through 2.34. Further, to reinforce the objective of efficiency in financial analysis, we adhere to the search sequence outlined in Exhibit 2.3. view more..
+
Ans: The nonrecurring items located in the Baker Hughes annual report are enumerated in the completed SEB worksheet in Exhibit 2.35. Each of the nonrecurring items is recorded on the SEB worksheet. When an item is disclosed for the first, second, third, or fourth time, it is designated by a corresponding superscript view more..
+
Ans: The construction of an SEB worksheet always requires a judgment call. One could, of course, avoid all materiality judgments by simply recording all nonrecurring items without regard to their materiality. However, the classification of items as nonrecurring, as well as on occasion their measurement, calls for varying degrees of judgment. Some examples of Baker Hughes items that required the exercise of judgment, either in terms of classification or measurement, are discussed next. view more..
+
Ans: An estimation of the sustainable portion of earnings should be the centerpiece of analyzing business earnings. This task has become a far greater challenge over the past decade as the number of nonrecurring items has increased dramatically. This explosion has been driven by corporate reorganizations and associated activities. Some of the labels attached to these producers of nonrecurring items are restructuring, rightsizing, downsizing, reengineering, redeployment, repositioning, reorganizing, rationalizing, and realignment. view more..
+
Ans: Abigail Peabody was a very well-known nature photographer. Over the years she had had a number of best-sellers, and her books adorned the coffee tables of many households worldwide. On this particular day she was contemplating her golden years, which were fast approaching. In particular she was reviewing her year-end investment report and wondering why she was not better prepared. After all, she had been featured in the Sunday New York Times book section, had discussed her works with Martha Stewart, and had been the keynote speaker at the Audubon Society’s annual fund-raiser. She knew it was not her investment advisers’ fault. Their performance over the past years had been better than many of the market indixes. She wondered if she was just a poor businessperson. view more..
Next Article >>
ROLE OF THE SUSTAINABLE EARNINGS BASE