A thread is a flow of control within a process. A multithreaded process contains several different flows of control within the same address space. The benefits of multithreading include increased responsiveness to the user, resource sharing within the process, economy, and the ability to take advantage of multiprocessor architectures. User-level threads are threads that are visible to the programmer and are unknown to the kernel. 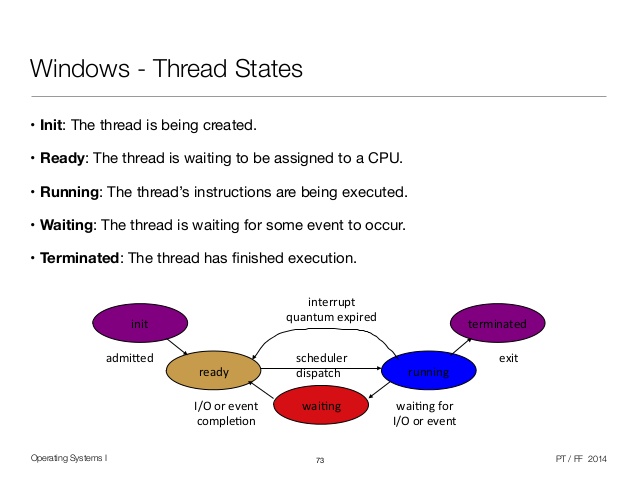 The operating-system kernel supports and manages kernel-level threads. In general, user-level threads are faster to create and manage than are kernel threads, as no intervention from the kernel is required. Three different types of models relate user and kernel threads:

Most modern operating systems provide kernel support for threads; among these are Windows 98, NT, 2000, and XP, as well as Solaris and Linux. Thread libraries provide the application programmer with an API for creating and managing threads. Three primary thread libraries are in common use: POSIX Pthreads, Win32 threads for Windows systems, and Java threads.

Multithreaded programs introduce many challenges for the programmer, including the semantics of the f ork() and exec() system calls. Other issues include thread cancellation, signal handling, and thread-specific data.

+
Ans: Operating systems provide a number of services. At the lowest level, system calls allow a running program to make requests from the operating system directly. At a higher level, the command interpreter or shell provides a mechanism for a user to issue a request without writing a program. Commands may come from files during batch-mode execution or directly from a terminal when in an interactive or time-shared mode. System programs are provided to satisfy many common user requests. The types of requests vary according to level. view more..
+
Ans: Special-Purpose Systems The discussion thus far has focused on general-purpose computer systems that we are all familiar with. There are, however, different classes of computer systems whose functions are more limited and whose objective is to deal with limited computation domains. view more..
+
Ans: Distributed Systems A distributed system is a collection of physically separate, possibly heterogeneous computer systems that are networked to provide the users with access to the various resources that the system maintains. Access to a shared resource increases computation speed, functionality, data availability, and reliability. Some operating systems generalize network access as a form of file access, with the details of networking contained in the network interface's device driver. view more..
+
Ans: Summary A thread is a flow of control within a process. A multithreaded process contains several different flows of control within the same address space. The benefits of multithreading include increased responsiveness to the user, resource sharing within the process, economy, and the ability to take advantage of multiprocessor architectures. User-level threads are threads that are visible to the programmer and are unknown to the kernel. view more..
+
Ans: Motivation A distributed system is a collection of loosely coupled processors interconnected by a communication network. From the point of view of a specific processor in a distributed system, the rest of the processors and their respective resources are remote, whereas its own resources are local. The processors in a distributed system may vary in size and function. They may include small microprocessors, workstations, minicomputers, and large general-purpose computer systems. view more..
+
Ans: Summary Multimedia applications are in common use in modern computer systems. Multimedia files include video and audio files, which may be delivered to systems such as desktop computers, personal digital assistants, and cell phones. view more..
+
Ans: Summary CPU scheduling is the task of selecting a waiting process from the ready queue and allocating the CPU to it. The CPU is allocated to the selected process by the dispatcher. First-come, first-served (FCFS) scheduling is the simplest scheduling algorithm, but it can cause short processes to wait for very long processes. Shortestjob-first (SJF) scheduling is provably optimal, providing the shortest average waiting time. Implementing SJF scheduling is difficult, however, because predicting the length of the next CPU burst is difficult. view more..
+
Ans: Summary It is desirable to be able to execute a process whose logical address space is larger than the available physical address space. Virtual memory is a technique that enables us to map a large logical address space onto a smaller physical memory. Virtual memory allowr s us to run extremely large processes and to raise the degree of multiprogramming, increasing CPU utilization. Further, it frees application programmers from worrying about memory availability. In addition, with virtual memory, several processes can share system libraries and memory. view more..
+
Ans: Summary Disk drives are the major secondary-storage I/O devices on most computers. Most secondary storage devices are either magnetic disks or magnetic tapes. Modern disk drives are structured as a large one-dimensional array of logical disk blocks which is usually 512 bytes. Disks may be attached to a computer system in one of two ways: (1) using the local I/O ports on the host computer or (2) using a network connection such as storage area networks. view more..
+
Ans: Microsoft designed Windows XP to be an extensible, portable operating system —one able to take advantage of new techniques and hardware. Windows XP supports multiple operating environments and symmetric multiprocessing, including both 32-bit and 64-bit processors and NUMA computers. view more..
+
Ans: Summary A deadlock state occurs when two or more processes are waiting indefinitely for an event that can be caused only by one of the waiting processes. There are three principal methods for dealing with deadlocks: • Use some protocol to prevent or avoid deadlocks, ensuring that the system, will never enter a deadlock state. • Allow the system to enter a deadlock state, detect it, and then recover. • Ignore the problem altogether and pretend that deadlocks never occur in the system. The third solution is the one used by most operating systems, including UNIX and Windows view more..
+
Ans: Summary A process is a program in execution. As a process executes, it changes state. The state of a process is defined by that process's current activity. Each process may be in one of the following states: new, ready, running, waiting, or terminated. view more..
+
Ans: Summary A file is an abstract data type defined and implemented by the operating system. It is a sequence of logical records. A logical record may be a byte, a line (of fixed or variable length), or a more complex data item. The operating system may specifically support various record types or may leave that support to the application program. view more..
+
Ans: Summary Memory-management algorithms for multiprogrammed operating systems range from the simple single-user system approach to paged segmentation. The most important determinant of the method used in a particular system is the hardware provided. view more..
Next Article >>
Distributed System-Motivation