An electrical motor which converts electrical energy into mechanical energy is called motor. A motor which works on DC supply is called DC motor. It is a dc machine characterised by their versatility. There is not much difference between the construction of DC motor and DC generator. As motor is easy to control so it is used in various applications. 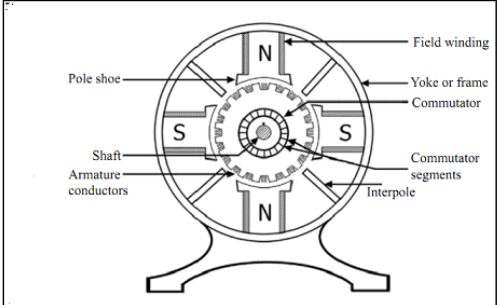 DC motor works on the principle which states that when a current carrying conductor is placed in a magnetic field, mechanical force is experienced on the conductor and the directionn of the force is given by Fleming's Left Hand rule. Force experienced by motor is given by:

where B = field strength in tesla

i = current flowing through conductor

When DC supply is given to motor, direct current passes through the brush and commutator to armature winding. When it is passed through commutator, it is converted into AC so that the group of the conductor under successive field poles carry current in the opposite direction.

Current in the armature winding establishes N and S poles on the rotor and their interaction with stator N and S poles result in clockwise rotation of armature. Due to armature rotation, the conductors cut the same flux that give rise to motor torque. This cutting of flux action causes the generation of EMF in the same conductor that experiences motor action. This generated EMF is in the direction of the flow of conductor current. As this generated EMF opposes the flow of current so it is known as Back EMF or counter EMF.

For the smooth working, applied voltage across the motor armature has to overcome the back emf and supply the armature ohmic drop. When back emf is increased, mechanical power as output also increases. Motor efficiency also increases with increase in back emf.

In starting, motor speed is zero and counter emf is also zero. Terminal voltage for all types of motor depends upon ra or ra +rs .Since this resistance are much smaller, the motor draws large armature current from the supply mains which may be as high as 1250A, much more than motor's rated current. It may result in spraking at the commutator, damage to armature winding, deterioration of insulation due to overheating, high starting torque and quick acceleration. So to avoid all these effects, armature current must be limited to a safe value by inserting a suitable resistance in the armature circuit. So, we need any starter to start the dc motor.

Types and characteristics of motor:

Similar to generator, motor is also classified as series, shunt and compound motor. In shunt and seperately excited motors, the field flux is nearly constant. The shunt motor is substantially a constant speed motor with about 6% drop in speed from no load to full load. In series motor, when the load is increased, then armature current, mmf and stator field flux is also increased. When flux is increased, speed must drop to maintain the balance between voltage and back emf. So series motor has the property of verying speed with drop in speed torque characteristics. Therefore, it can be used in applications requiring heavy torque overloads.

Characteristics of DC motor are as follows:- 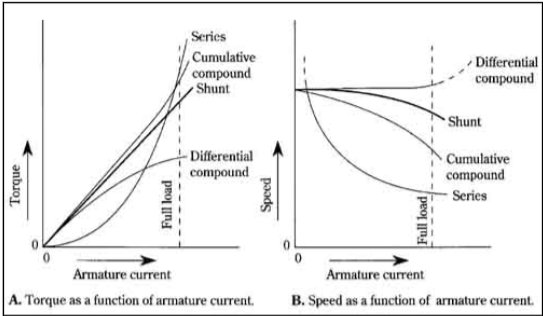 In case of shunt motor, it has wide application due to its variable speed characteristics. It can be done either by flux control method and rheostatic control method. 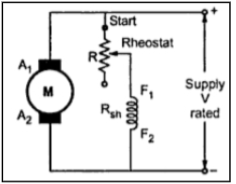 Braking of dc motor is of two types, electromechanical and elecric breaking.

1. Electromechanical Braking- This brakes are operated by electromagnet or electric operated thrusters. It is a spring loaded brake with friction liners passing against the brake wheel. The brake is released when magnet is energised. This ensures power failure. In that case, brake automatically grips the wheel.

2. Electric braking- It is of three types: 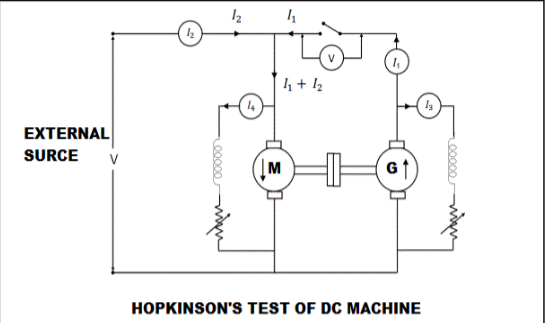 Let I1 = Armature currents of motor

I2 = Armature currents of generator

V = Terminal voltage of both machines

If nm is motor efficiency, the motor output = nmVI1

Since generator id driven by motor

This is a no-load test of motor. It cannot be performed on DC series motor. In this method, the machine whether it is a motor or a generator is run as a no-load shunt motor at rated speed and with rated terminal voltage V. In this, field current is adjusted to a rated value for accurate determination of no-load loss. Machine will run at higher speed than rated speed with rated armature voltage. A series resistor is employed in the armature circuit to reduce voltage applied to motor armature such that it runs at rated speed. 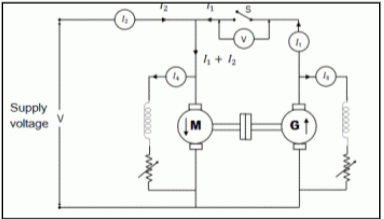 Ex 1: A shunt motor takes a total current of 20A from 250V supply. The shunt field and armature resistance are 200ohm and 0.3 ohm. Determine back emf and mechanical power developed in the armature.