System prototyping performs the analysis, design, and implementation phases concurrently in order to quickly develop a simplified version of the proposed system and give it to the users for evaluation and feedback. (See Figure 2-6).

The system prototype is a “quick and dirty” version of the system and provides minimal features. Following reaction and comments from the users, the developers reanalyze, redesign, and reimplement a second prototype that corrects deficiencies and adds more features.

This cycle continues until the analysts, users, and sponsor agree that the prototype provides enough functionality to be installed and used in the organization. System prototyping very quickly provides a system for users to evaluate and reassures users that progress is being made. The approach is very useful when users have difficulty expressing requirements for the system.

A disadvantage, however, is the lack of careful, methodical analysis prior to making design and implementation decisions. System prototypes may have some fundamental design limitations that are a direct result of an inadequate understanding of the system’s true requirements early in the project 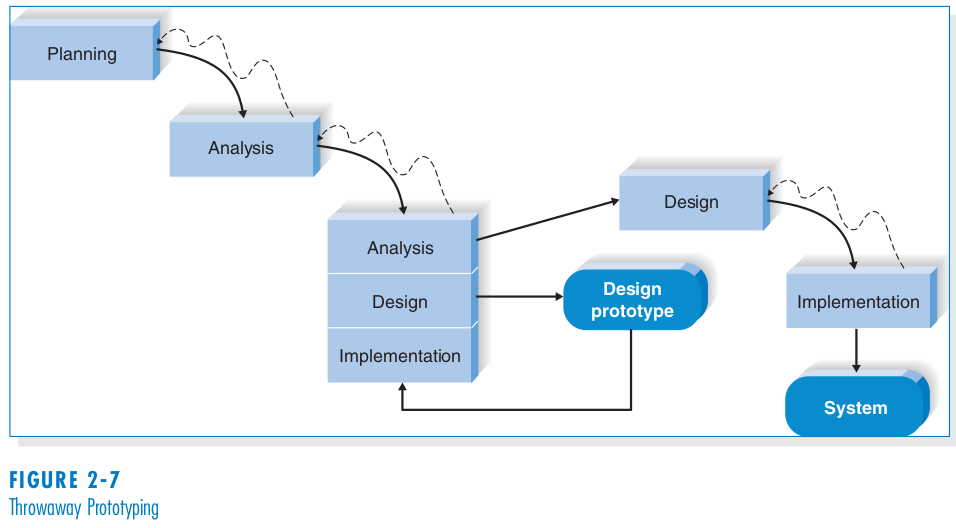 Throwaway prototyping includes the development of prototypes, but uses the prototypes primarily to explore design alternatives rather than as the actual new system (as in system prototyping). As shown in Figure 2-7, throwaway prototyping has a fairly thorough analysis phase that is used to gather requirements and to develop ideas for the system concept. Many of the features suggested by the users may not be well understood, however, and there may be challenging technical issues to be solved. Each of these issues is examined by analyzing, designing, and building a design prototype. A design prototype is not intended to be a working system. It contains only enough detail to enable users to understand the issues under consideration.

For example, suppose that users are not completely clear on how an order entry system should work. The analyst team might build a series of HTML pages to be viewed on a Web browser to help the users visualize such a system. In this case, a series of mock-up screens appear to be a system, but they really do nothing. Or, suppose that the project team needs to develop a sophisticated graphics program in Java. The team could write a portion of the program with artificial data to ensure that they could create a full-blown program successfully.
A system that is developed by this type of methodology probably requires several design prototypes during the analysis and design phases.

Each of the prototypes is used to minimize the risk associated with the system by confirming that important issues are understood before the real system is built. Once the issues are resolved, the project moves into design and implementation. At this point, the design prototypes are thrown away, which is an important difference between this approach and system prototyping, in which the prototypes evolve into the final system.

Throwaway prototyping balances the benefits of well-thought-out analysis and design phases with the advantages of using prototypes to refine key issues before a system is built. It may take longer to deliver the final system compared with system prototyping (because the prototypes do not become the final system), but the approach usually produces more stable and reliable systems

+
Ans: The first published model of software development process was derived from more general system engineering processes. Because of the cascade from one phase to another, this model is known as the waterfall model or software life cycle. The principal stages of the model map onto fundamental development activities: view more..
+
Ans: Sofware engineering syllabus The course of the program is designed in an exceedingly manner that it covers all the aspects of software system engineering needed for higher understanding of the scholars. The delivery methodology of the program is usually schoolroom lectures Associate in Nursing sensible laboratory sessions beside seminars and internships being an integral a part of the course. BE/B.Tech software system Engineering give students data of evaluating the correct codes and software system for specific tasks. view more..
+
Ans: Data-flow diagrams are versatile diagramming tools. view more..
+
Ans: System prototyping performs the analysis, design, and implementation phases concurrently in order to quickly develop a simplified version of the proposed system and give it to the users for evaluation and feedback. view more..
+
Ans: Software is defined as collection of data, programs, procedures, associated documentaion and rules. which does not have any mass, volume and colour. software does not wear out,get tired or degrade over a long period of time view more..
Next Article >>
Characteristics of Software