Entity Types and Entity Sets:. A database usually contains groups of entities that are similar. For example, a company employing hundreds of employees may want to store similar information concerning each of the employees. These employee entities share the same attributes, but each entity has its own value(s) for each attribute. An entity type defines a collection (or set) of entities that have the same attributes. Each entity type in the database is described by its name and attributes. Figure shows two entity types: EMPLOYEE and COMPANY, and a list of some of the attributes for 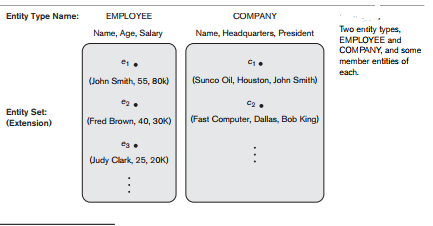 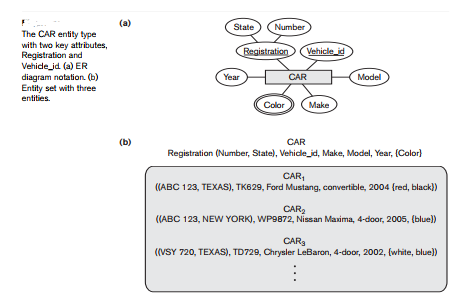 Value Sets (Domains) of Attributes.: Each simple attribute of an entity type is associated with a value set (or domain of values), which specifies the set of values that may be assigned to that attribute for each individual entity. In Figure, if the range of ages allowed for employees is between 16 and 70, we can specify the value set of the Age attribute of EMPLOYEE to be the set of integer numbers between 16 and 70. Similarly, we can specify the value set for the Name attribute to be the set of strings of alphabetic characters separated by blank characters, and so on. Value sets are not displayed in ER diagrams, and are typically specified using the basic data types available in most programming languages, such as integer, string, Boolean, float, enumerated type, subrange, and so on. Additional data types to represent common database types such as date, time, and other concepts are also employed.

Mathematically, an attribute A of entity set E whose value set is V can be defined as a function from E to the power set6 P(V) of V: A : E → P(V)

A(e) is restricted to being a singleton set for each entity e in E, whereas there is no restriction on multivalued attributes.7 For a composite attribute A, the value set V is the power set of the Cartesian product of P(V1), P(V2), ..., P(Vn), where V1, V2, ..., Vn are the value sets of the simple component attributes that form A:

The value set provides all possible values. Usually only a small number of these values exist in the database at a particular time. Those values represent the data from the current state of the miniworld. They correspond to the data as it actually exists in the miniworld.

+
Ans: Entities and Their Attributes. The basic object that the ER model represents is an entity, which is a thing in the real world with an independent existence. An entity may be an object with a physical existence (for example, a particular person, car, house, or employee) view more..
+
Ans: The company is organized into departments. Each department has a unique name, a unique number, and a particular employee who manages the department. We keep track of the start date when that employee began managing the department. A department may have several locations.  A department controls a number of projects, each of which has a unique name, a unique number, and a single location view more..
+
Ans: SQL permits a variety of functions on character strings. Read to know about them. view more..
+
Ans: A database usually contains groups of entities that are similar. For example, a company employing hundreds of employees may want to store similar information concerning each of the employees. These employee entities share the same attributes, but each entity has its own value(s) for each attribut view more..
+
Ans: An entity type DEPARTMENT with attributes Name, Number, Locations, Manager, and Manager_start_date. Locations is the only multivalued attribute. We can specify that both Name and Number are (separate) key attributes because each was specified to be unique view more..
+
Ans: There are several implicit relationships among the various entity types. In fact, whenever an attribute of one entity type refers to another entity type, some relationship exists. For example, the attribute Manager of DEPARTMENT refers to an employee who manages the department; the attribute view more..
+
Ans: Select clause uses. view more..
+
Ans: Entity types that do not have key attributes of their own are called weak entity types. In contrast,regular entity types that do have a key attribute—which include all the examples discussed so far—are called strong entity types view more..
+
Ans: If some cardinality ratio or dependency cannot be determined from the requirements, the users must be questioned further to determine these structural constraints view more..
+
Ans: The individual entity instances in an entity set and the individual relationship instances in a relationship set. In ER diagrams the emphasis is on representing the schemas rather than the instances. view more..
+
Ans: The UML methodology is being used extensively in software design and has many types of diagrams for various software design purposes. We only briefly present the basics of UML class diagrams here, and compare them with ER diagrams view more..
+
Ans: we defined the degree of a relationship type as the number of participating entity types and called a relationship type of degree two binary and a relationship type of degree three ternary view more..
+
Ans: SQL offers the user some control over the order in which tuples in a relation are displayed. view more..
+
Ans: The rapid advancement of the use of information technology (IT) in industry, government, and academia raises challenging questions and problems regarding the protection and use of personal information. Questions of who has what rights to information about individuals for which purposes become more important as we move toward a world in which it is technically possible to know just about anything about anyone. view more..
+
Ans: Sensitivity of data is a measure of the importance assigned to the data by its owner, for the purpose of denoting its need for protection. Some databases contain only sensitive data while other databases may contain no sensitive data at all. view more..
+
Ans: Whenever a person or a group of persons needs to access a database system, the individual or group must first apply for a user account. The DBA will then create a new account number and password for the user if there is a legitimate need to access the database. view more..
+
Ans: The database administrator (DBA) is the central authority for managing a database system. The DBA’s responsibilities include granting privileges to users who need to use the system and classifying users and data in accordance with the policy of the organization view more..
+
Ans: SQL includes a between comparison operator to simplify where clauses that specify that a value be less than or equal to some value and greater than or equal to some other value. view more..
Next Article >>
Initial Conceptual Design of the COMPANY Database