There are two main reasons for including class/subclass relationships and specializations in a data model. The first is that certain attributes may apply to some but not all entities of the superclass. A subclass is defined in order to group the entities to which these attributes apply. The members of the subclass may still share the majority of their attributes with the other members of the superclass. For example, in Figure 8.1 the SECRETARY subclass has the specific attribute Typing_speed, whereas the ENGINEER subclass has the specific attribute Eng_type, but SECRETARY and ENGINEER share their other inherited attributes from the EMPLOYEE entity type. The second reason for using subclasses is that some relationship types may be participated in only by entities that are members of the subclass. For example, if only HOURLY_EMPLOYEES can belong to a trade union, we can represent that fact by creating the subclass HOURLY_EMPLOYEE of EMPLOYEE and relating the subclass to an entity type TRADE_UNION via the BELONGS_TO relationship type, as illustrated in Figure 8.1.
In summary, the specialization process allows us to do the following:
? Define a set of subclasses of an entity type
? Establish additional specific attributes with each subclass
? Establish additional specific relationship types between each subclass and
other entity types or other subclasses 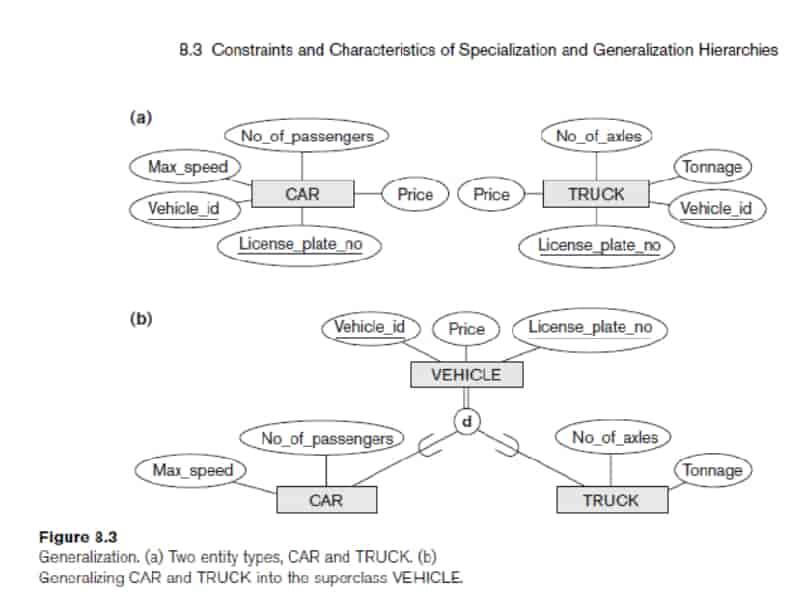