Distributed systems operate effectively and efficiently at many different scales, ranging from a small intranet to the Internet. A system is described as scalable if it will remain effective when there is a significant increase in the number of resources and the number
of users. The number of computers and servers in the Internet has increased dramatically. Figure 1.6 shows the increasing number of computers and web servers during the 12-year history of the Web up to 2005 [zakon.org]. It is interesting to note the significant growth in both computers and web servers in this period, but also that the relative percentage is flattening out – a trend that is explained by the growth of fixed and mobile personal computing. One web server may also increasingly be hosted on multiple computers.
The design of scalable distributed systems presents the following challenges:
Controlling the cost of physical resources: As the demand for a resource grows, it should be possible to extend the system, at reasonable cost, to meet it. For example, the frequency with which files are accessed in an intranet is likely to grow as the number of users and computers increases. It must be possible to add server computers to avoid the performance bottleneck that would arise if a single file server had to handle all file access requests. In general, for a system with n users to be scalable, the quantity of physical resources required to support them should be at most O(n) – that is, proportional to n. For example, if a single file server can support 20 users, then
two such servers should be able to support 40 users. Although that sounds an obvious goal, it is not necessarily easy to achieve in practice.
Controlling the performance loss: Consider the management of a set of data whose size is proportional to the number of users or resources in the system – for example, the table with the correspondence between the domain names of computers and their Internet addresses held by the Domain Name System, which is used mainly to look up DNS names such as www.amazon.com. Algorithms that use hierarchic structures
scale better than those that use linear structures. But even with hierarchic structures an increase in size will result in some loss in performance: the time taken to access hierarchically structured data is O(log n), where n is the size of the set of data. For a system to be scalable, the maximum performance loss should be no worse than this.
Preventing software resources running out: An example of lack of scalability is shown by the numbers used as Internet (IP) addresses (computer addresses in the Internet). In the late 1970s, it was decided to use 32 bits for this purpose, but as will be explained in Chapter 3, the supply of available Internet addresses is running out.
For this reason, a new version of the protocol with 128-bit Internet addresses is being adopted, and this will require modifications to many software components. To be fair to the early designers of the Internet, there is no correct solution to this problem. It is difficult to predict the demand that will be put on a system years ahead. Moreover, overcompensating for future growth may be worse than adapting to a change when we are forced to – larger Internet addresses will occupy extra space in messages and in computer storage.
Avoiding performance bottlenecks: In general, algorithms should be decentralized to avoid having performance bottlenecks. We illustrate this point with reference to the predecessor of the Domain Name System, in which the name table was kept in a single master file that could be downloaded to any computers that needed it. That was
fine when there were only a few hundred computers in the Internet, but it soon became a serious performance and administrative bottleneck. The Domain Name System removed this bottleneck by partitioning the name table between servers located throughout the Internet and administered locally.
Some shared resources are accessed very frequently; for example, many users may access the same web page, causing a decline in performance.  caching and replication may be used to improve the performance of resources that are very heavily used.
Ideally, the system and application software should not need to change when the scale of the system increases, but this is difficult to achieve. The issue of scale is a dominant theme in the development of distributed systems. The techniques that have been successful are discussed extensively in this book. They include the use of replicated data, the associated technique of caching and the deployment of multiple servers to handle commonly performed tasks, enabling several similar tasks to be performed concurrently. 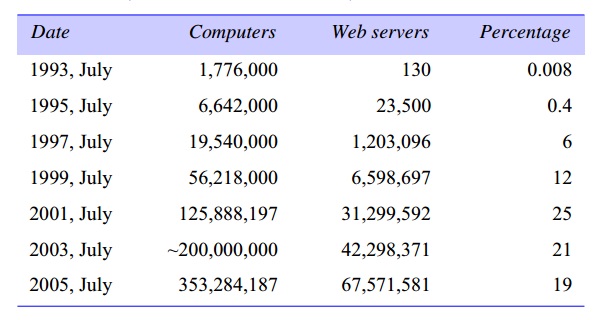 +
Ans: a firewall can be used to form a barrier around an intranet, restricting the traffic that can enter and leave, this does not deal with ensuring the appropriate use of resources by users within an intranet, or with the appropriate use of resources in the Internet, that are not protected by firewalls. view more..
+
Ans: the publication of interfaces is only the starting point for adding and extending services in a distributed system. The challenge to designers is to tackle the complexity of distributed systems consisting of many components engineered by different people. view more..
+
Ans: Data types such as integers may be represented in different ways on different sorts of hardware – for example, there are two alternatives for the byte ordering of integers. These differences in representation must be dealt with if messages are to be exchanged between programs running on different hardware view more..
+
Ans: ly and efficiently at many different scales, ranging from a small intranet to the Internet. A system is described as scalable if it will remain effective when there is a significant increase in the number of resources and the number of users. The number of computers and servers in the Internet has increased dramatically. view more..
+
Ans: Failures in a distributed system are partial – that is, some components fail while others continue to function. Therefore the handling of failures is particularly difficult. The following techniques for dealing with failures are discussed throughout the book view more..
+
Ans: he process that manages a shared resource could take one client request at a time. But that approach limits throughput. Therefore services and applications generally allow multiple client requests to be processed concurrently. view more..
+
Ans: oncealment from the user and the application programmer of the separation of components in a distributed system, so that the system is perceived as a whole rather than as a collection of independent components view more..
+
Ans: Reliability and security issues are critical in the design of most computer systems. The performance aspect of quality of service was originally defined in terms of responsiveness and computational throughput, but it has been redefined in terms of ability to meet timeliness guarantees, as discussed in the following paragraphs view more..
+
Ans: The Web began life at the European centre for nuclear research (CERN), Switzerland, in 1989 as a vehicle for exchanging documents between a community of physicists connected by the Internet [Berners-Lee 1999]. A key feature of the Web is that it provides a hypertext structure among the documents that it stores, reflecting the users’ requirement to organize their knowledge. view more..
+
Ans: Resource sharing is the main motivating factor for constructing distributed systems. Resources such as printers, files, web pages or database records are managed by servers of the appropriate type. For example, web servers manage web pages and other web resources. Resources are accessed by clients – for example, the clients of web servers are generally called browsers. view more..
+
Ans: Physical models consider the types of computers and devices that constitute a system and their interconnectivity, without details of specific technologies. view more..
+
Ans: The discussion and examples of Chapter 1 suggest that distributed systems of different types share important underlying properties and give rise to common design problems. In this chapter we show how the properties and design issues of distributed systems can be captured and discussed through the use of descriptive models view more..
+
Ans: A physical model is a representation of the underlying hardware elements of a distributed system that abstracts away from specific details of the computer and networking technologies employed. view more..
+
Ans: Major concerns are to make the system reliable, manageable, adaptable and cost-effective. The architectural design of a building has similar aspects – it determines not only its appearance but also its general structure and architectural style (gothic, neo-classical, modern) and provides a consistent frame of reference for the design view more..
+
Ans: From a system perspective, the answer is normally very clear in that the entities that communicate in a distributed system are typically processes, leading to the prevailing view of a distributed system as processes coupled with appropriate interprocess communication paradigms view more..
+
Ans: ion for a given problem domain. This is a large topic, and many architectural patterns have been identified for distributed systems. In this section, we present several key architectural patterns in distributed systems, including layering and tiered architectures and the related concept of thin clients (including the specific mechanism of virtual network computing). We also examine web services as an architectural pattern and give pointers to others that may be applicable in distributed systems. view more..
+
Ans: As mentioned in the introduction, networks are everywhere and underpin many everyday services that we now take for granted: the Internet and the associated World Wide Web, web search, online gaming, email, social networks, eCommerce, etc. To illustrate this point further, consider Figure 1.1 , which describes a selected range of key commercial or social application sectors highlighting some of the associated established or emerging uses of distributed systems technology. view more..
+
Ans: If another organization develops or runs a computer application for your organization, that practice is called outsourcing. Outsourcing includes a spectrum of working arrangements view more..
Next Article >>
Failure handling