Distributed computing as a utility

With the increasing maturity of distributed systems infrastructure, a number of companies are promoting the view of distributed resources as a commodity or utility, drawing the analogy between distributed resources and other utilities such as water or electricity. With this model, resources are provided by appropriate service suppliers and effectively rented rather than owned by the end user. This model applies to both physical resources and more logical services:
• Physical resources such as storage and processing can be made available to networked computers, removing the need to own such resources on their own. At one end of the spectrum, a user may opt for a remote storage facility for file storage requirements (for example, for multimedia data such as photographs, music or video) and/or for backups. Similarly, this approach would enable a user to rent one or more computational nodes, either to meet their basic computing needs or indeed to perform
distributed computation. At the other end of the
spectrum, users can access sophisticated data centers (networked facilities offering access to repositories of often large volumes of data to users or organizations) or indeed computational infrastructure using the sort of services now provided by companies such as Amazon and Google. Operating system virtualization is a key enabling technology for this approach, implying that users may actually be provided with services by a virtual rather than a physical node.This offers greater flexibility to the service supplier in terms of resource management.
• Software services can also be made available across the global Internet using this approach. Indeed, many companies now offer a comprehensive range of services for effective rental, including services such as email and distributed calendars. Google, for example, bundles a range of business services under the banner Google Apps [www.google.com I]. This development is enabled by agreed standards for software services, for example as provided by web services.

The term cloud computing is used to capture this vision of computing as a utility. A cloud is defined as a set of Internet-based application, storage and computing services sufficient to support most users’ needs, thus enabling them to largely or totally dispense with local data storage and application software (see Figure ). The term also promotes a view of everything as a service, from physical or virtual infrastructure through to software, often paid for on a per-usage basis rather than purchased. Note that cloud computing reduces requirements on users’ devices, allowing very simple desktop or portable devices to access a potentially wide range of resources and services.
Clouds are generally implemented on cluster computers to provide the necessary scale and performance required by such services. A cluster computer is a set of interconnected computers that cooperate closely to provide a single, integrated high-performance computing capability. Building on projects such as the NOW (Network of Workstations) Project at Berkeley [Anderson et al. 1995, now.cs.berkeley.edu] and
Beowulf at NASA [www.beowulf.org], the trend is towards utilizing commodity hardware both for the computers and for the interconnecting networks. 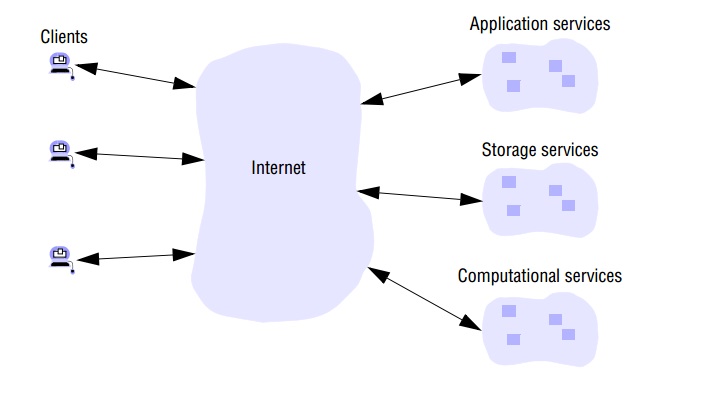 Most clusters consist of commodity PCs running a standard (sometimes cut-down) version of an operating system such as Linux, interconnected by a local area network. Companies such as HP, Sun and IBM offer blade solutions. Blade servers are minimal computational elements containing for example processing and (main memory) storage capabilities. A blade system consists of a potentially large number of blade servers contained within a blade enclosure. Other elements such as power, cooling, persistent storage (disks), networking and displays, are provided either by the enclosure or through virtualized solutions (discussed in Chapter 7). Through this solution, individual blade servers can be much smaller and also cheaper to produce than commodity PCs.
The overall goal of cluster computers is to provide a range of cloud services, including high-performance computing capabilities, mass storage (for example through data centers), and richer application services such as web search (Google, for example, relies on a massive cluster computer architecture to implement its search engine and other services).
Grid computing can also be viewed as a form of cloud computing. The terms are largely synonymous and at times ill-defined, but Grid computing can generally be viewed as a precursor to the more general paradigm of cloud computing with a bias towards support for scientific applications.

+
Ans: The crucial characteristic of continuous media types is that they include a temporal dimension, and indeed, the integrity of the media type is fundamentally dependent on preserving real-time relationships between elements of a media type. view more..
+
Ans: Technological advances in device miniaturization and wireless networking have led increasingly to the integration of small and portable computing devices into distributed systems. view more..
+
Ans: The Internet is also a very large distributed system. It enables users, wherever they are, to make use of services such as the World Wide Web, email and file transfer. (Indeed, the Web is sometimes incorrectly equated with the Internet.) view more..
+
Ans: hysical resources such as storage and processing can be made available to networked computers, removing the need to own such resources on their own. At one end of the spectrum, a user may opt for a remote storage facility for file storage requirements view more..
+
Ans: In practice, patterns of resource sharing vary widely in their scope and in how closely users work together. At one extreme, a search engine on the Web provides a facility to users throughout the world, users who need never come into contact with one another directly. At the other extreme, in computer-supported cooperative working (CSCW), a group of users who cooperate directly share resources such as documents in a small, closed group. view more..
+
Ans: Data types such as integers may be represented in different ways on different sorts of hardware – for example, there are two alternatives for the byte ordering of integers. These differences in representation must be dealt with if messages are to be exchanged between programs running on different hardware view more..
+
Ans: the publication of interfaces is only the starting point for adding and extending services in a distributed system. The challenge to designers is to tackle the complexity of distributed systems consisting of many components engineered by different people. view more..
+
Ans: a firewall can be used to form a barrier around an intranet, restricting the traffic that can enter and leave, this does not deal with ensuring the appropriate use of resources by users within an intranet, or with the appropriate use of resources in the Internet, that are not protected by firewalls. view more..
+
Ans: ly and efficiently at many different scales, ranging from a small intranet to the Internet. A system is described as scalable if it will remain effective when there is a significant increase in the number of resources and the number of users. The number of computers and servers in the Internet has increased dramatically. view more..
+
Ans: Failures in a distributed system are partial – that is, some components fail while others continue to function. Therefore the handling of failures is particularly difficult. The following techniques for dealing with failures are discussed throughout the book view more..
+
Ans: he process that manages a shared resource could take one client request at a time. But that approach limits throughput. Therefore services and applications generally allow multiple client requests to be processed concurrently. view more..
+
Ans: oncealment from the user and the application programmer of the separation of components in a distributed system, so that the system is perceived as a whole rather than as a collection of independent components view more..
+
Ans: Reliability and security issues are critical in the design of most computer systems. The performance aspect of quality of service was originally defined in terms of responsiveness and computational throughput, but it has been redefined in terms of ability to meet timeliness guarantees, as discussed in the following paragraphs view more..
+
Ans: The Web began life at the European centre for nuclear research (CERN), Switzerland, in 1989 as a vehicle for exchanging documents between a community of physicists connected by the Internet [Berners-Lee 1999]. A key feature of the Web is that it provides a hypertext structure among the documents that it stores, reflecting the users’ requirement to organize their knowledge. view more..
+
Ans: Resource sharing is the main motivating factor for constructing distributed systems. Resources such as printers, files, web pages or database records are managed by servers of the appropriate type. For example, web servers manage web pages and other web resources. Resources are accessed by clients – for example, the clients of web servers are generally called browsers. view more..
+
Ans: Physical models consider the types of computers and devices that constitute a system and their interconnectivity, without details of specific technologies. view more..
+
Ans: The discussion and examples of Chapter 1 suggest that distributed systems of different types share important underlying properties and give rise to common design problems. In this chapter we show how the properties and design issues of distributed systems can be captured and discussed through the use of descriptive models view more..
+
Ans: A physical model is a representation of the underlying hardware elements of a distributed system that abstracts away from specific details of the computer and networking technologies employed. view more..
Next Article >>
Focus on resource sharing