A special committee of the American Institute of Certified Public Accountants (AICPA) concluded the following about earnings and the needs of those who use financial statements:

Users want information about the portion of a company’s reported earnings that is stable or recurring and that provides a basis for estimating sustainable earnings.

While users may want information about the stable or recurring portion of a company’s earnings, firms are under no obligation to provide this earnings series. However, generally accepted accounting principles (GAAPs) require separate disclosure of selected nonrecurring revenues, gains, expenses, and losses on the face of the income statement or in notes to the financial statements. Further, the Securities and Exchange Commission (SEC) requires the disclosure of material nonrecurring items.

The prominence given the demand by users for information on nonrecurring items in the above AICPA report is, no doubt, driven in part by the explosive growth in nonrecurring items over the past decade. The acceleration of change together with a passion for downsizing, rightsizing, and reengineering have fueled this growth. The Financial Accounting Standards Board’s (FASB) issuance of a number of new accounting statements that require recognition of previously unrecorded expenses and more timely recognition of declines in asset values has also contributed to the increase in nonrecurring items.

A limited number of firms do provide, on a voluntary basis, schedules that show their results with nonrecurring items removed. Mason Dixon Bancshares provides one such example. Exhibit 2.1 shows a Mason Dixon schedule that adjusts reported net income to a revised earnings measure from which nonrecurring revenues, gains, expenses, and losses have been removed. This is the type of information that the previously quoted statement of the AICPA’s Special Committee calls for.

Firms that record either a large nonrecurring gain or loss frequently attempt to offset its effect on net income by recording a number of offsetting items. In the case of Mason Dixon, the large gain on the sale of branches if not offset may raise earnings expectations to levels that are unattainable. Alternatively, the recording of offsetting charges may be seen as a way to relieve future earnings of their burden. We do not claim that this was done in the case of Mason Dixon Bancshares, but its results are consistent with this practice.

Though exceptions like the Mason Dixon Bancshares example do occur, the task of developing information on a firm’s recurring or sustainable results normally falls to the statement user. Companies do provide, to varying degrees, the raw materials for this analysis; however, the formidable task of creating—an analysis comparable to that provided by Mason Dixon—is typically left to the user. The central goal of this chapter is to help users develop the background and skills to perform this critical aspect of earnings analysis. The chapter will discuss nonrecurring items and outline efficient approaches for locating them in financial statements and associated notes. As key background we will also discuss and illustrate income statement formats and other issues of classification. Throughout the chapter, we illustrate concepts using information drawn from 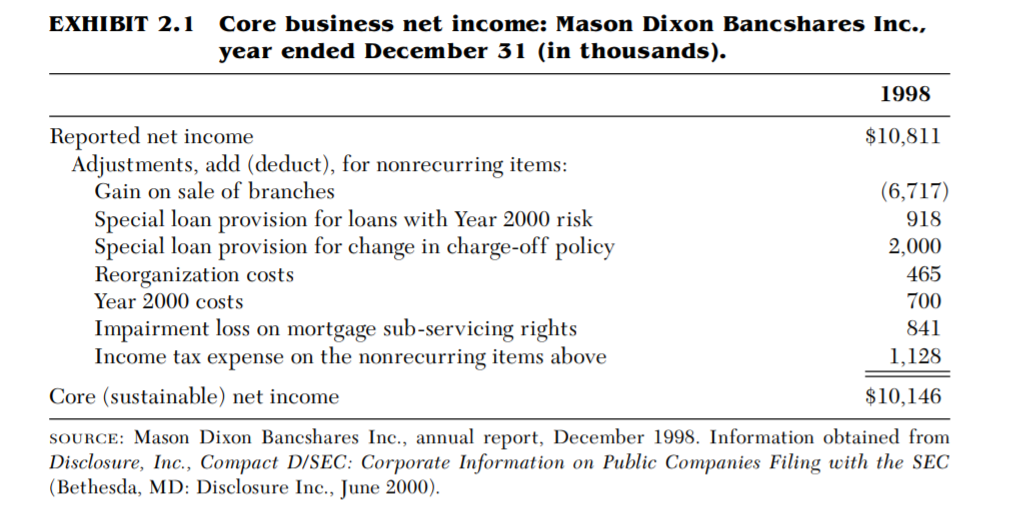 the financial statements of many companies. As a summary exercise, a comprehensive case is provided that removes all nonrecurring items from reported results to arrive at a sustainable earnings series.