The U.S. Department of Defense Trusted Computer System Evaluation Criteria specify four security classifications in systems: A, B, C, and D. This specification is widely used to determine the security of a facility and to model security solutions, so we explore it here.

The lowest-level classification is division D, or minimal protection. Division D includes only one class and is used for systems that have failed to meet the requirements of any of the other security classes. For instance, MS-DOS and Windows 3.1 are in division D. Division C, the next level of security, provides discretionary protection and accountability of users and their actions through the use of audit capabilities.

Division C has two levels: Cl and C2. A Cl-class system incorporates some form of controls that allow users to protect private information and to keep other users from accidentally reading or destroying their data. A Cl environment is one in which cooperating users access data at the same levels of sensitivity. Most versions of UNIX are Cl class. 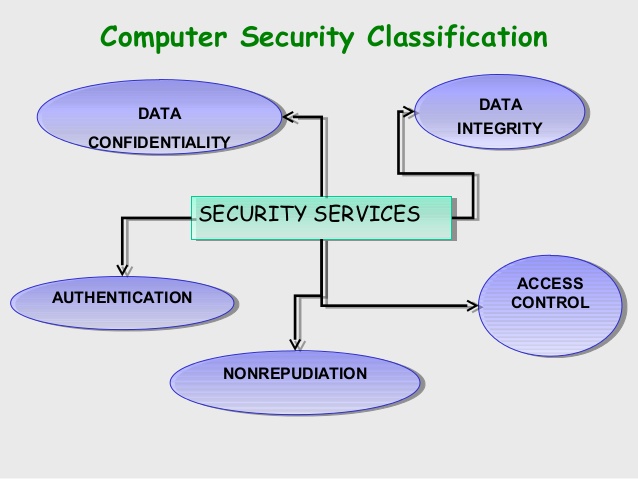 The sum total of all protection systems within a computer system (hardware, software, firmware) that correctly enforce a security policy is known as a trusted computer base (TCB). The TCB of a Cl system controls access between users and files by allowing the user to specify and control sharing of objects by named individuals or defined groups.

In addition, the TCB requires that the users identify themselves before they start any activities that the TCB is expected to mediate. This identification is accomplished via a protected mechanism or password; the TCB protects the authentication data so that they are inaccessible to unauthorized users. A C2-class system adds an individual-level access control to the requirements of a Cl system.

For example, access rights of a file can be specified to the level of a single individual. In addition, the system administrator can selectively audit the actions of any one or more users based on individual identity. The TCB also protects itself from modification of its code or data structures. In addition, no information produced by a prior user is available to another user who accesses a storage object that has been released back to the system.

Some special, secure versions of UNIX have been certified at the C2 level. Division-B mandatory-protection systems have all the properties of a classC2 system; in addition, they attach a sensitivity label to each object. The Bl-class TCB maintains the security label of each object in the system; the label is used for decisions pertaining to mandatory access control.

For example, a user at the confidential level could not access a file at the more sensitive secret level. The TCB also denotes the sensitivity level at the top and bottom of each page of any human-readable output. In addition to the normal user-namepassword authentication information, the TCB also maintains the clearance and authorizations of individual users and will support at least two levels of security. These levels are hierarchical, so that a user may access any objects that carry sensitivity labels equal to or lower than his security clearance.

For example, a secret-level user could access a file at the confidential level in the absence of other access controls. Processes are also isolated through the use of distinct address spaces. A B2-class system extends the sensitivity labels to each system resource, such as storage objects.

Physical devices are assigned minimum and maximum security levels that the system uses to enforce constraints imposed by the physical environments in which the devices are located. In addition, a B2 system supports covert channels and the auditing of events that could lead to the exploitation of a covert channel. A B3-class system allows the creation of access-control lists that denote users or groups not granted access to a given named object. The TCB also contains a mechanism to monitor events that may indicate a violation .

The mechanism notifies the security administrator aid, if necessary, terminates the event in the least disruptive manner. The highest-level classification is division A. Architecturally, a class-Al system is functionally equivalent to a B3 system, but it uses formal design specifications and verification techniques, granting a high degree of assurance that the TCB has been implemented correctly. A system beyond class Al might be designed and developed in a trusted facility by trusted personnel.

The use of a TCB merely ensures that the system can enforce aspects of a security policy; the TCB does not specify what the policy should be. Typically, a given computing environment develops a security policy for certification and has the plan accredited by a security agency, such as the National Computer Security Center. Certain computing environments may require other certification, such as that supplied by TEMPEST, which guards against electronic eavesdropping. For example, a TEMPEST-certified system has terminals that are shielded to prevent electromagnetic fields from escaping. This shielding ensures that equipment outside the room or building where the terminal is housed cannot detect what information is being displayed by the terminal.