A technique which allow many people siting at various terminals to access particular computer system at the same time. Processor's time which is shared among multiple users simultaneously is termed as time-sharing. The main difference between Multiprogrammed Batch Systems and Time-Sharing Systems is that in Multiprogrammed batch systems, the aim is to maximize processor use, whereas in Time-Sharing Systems, the aim is to minimize response time, i.e A time sharing operating system is a multi tasking operating system in which the CPU time is divided equally among all the jobs waiting for the time on the CPU. Normally this time slice is 10 to 100 miceoseconds. 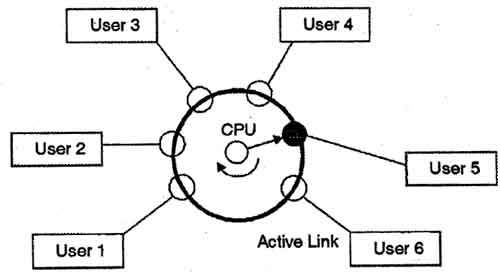 Time sharing systems are all around us. For example, while we are using our smartphone we can listen songs, search something, view pictures and various notifications appear side by side. All this is enabled by time sharing operating system only. OS does the switching between these tasks time and again so that they all are executed continuously.

Why to use time sharing operating systems?

In the era of modern technology there are lot many tasks and activities that are required be run at the same time. Like in smartphones the games,notification bar, weather forecasting, songs are all running at the same time so time sharing systems are more efficient to use. Real time operating systems also uses time sharing as a key for better performance.