The conversion from and to binary, octal, and hexadecimal representation plays an important part in digital computers. Since 23 = 8 and 24 = 16, each octal digit corresponds to three binary digits and each hexadecimal digit corresponds to four binary digits.The conversion from binary to octal is easily accomplished by partitioning the binary number into groups of three bits each. The corresponding octal digit is then assigned to each group of bits and the string of digits so obtained gives the octal equivalent of the binary number. Consider, for example, a 16-bit register. Physically, one may think of the 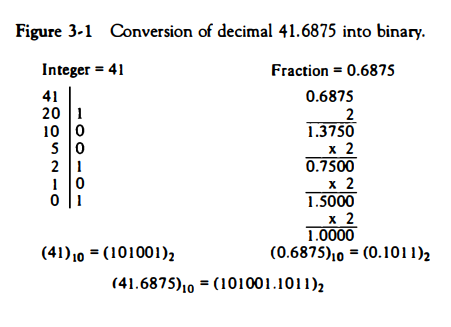 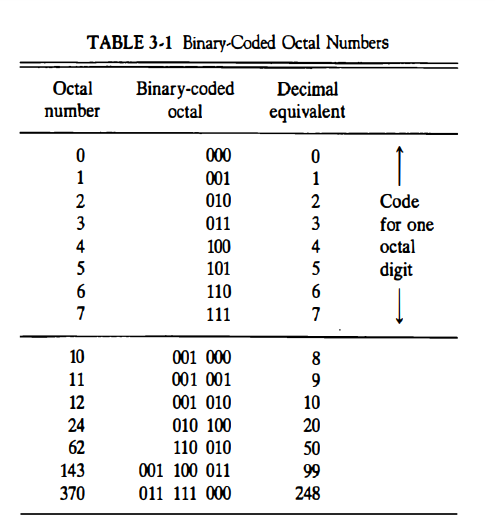 +
Ans: Conversion from decimal to its equivalent representation in the radix r system is carried out by separating the number into its integer and fraction parts and converting each part separately. view more..
+
Ans: A number system of base, or radix, r is a system that uses distinct symbols for r digits. Numbers are represented by a string of digit symbols. To determine the quantity that the number represents, it is necessary to multiply each digit by an integer power of r and then form the sum of all weighted digits. view more..
+
Ans: Binary information in digital computers is stored in memory or processor registers. Registers contain either data or control information. Control information Is a bit or a group of bits used to specify the sequence of command signals needed for manipulation of the data in other register view more..
+
Ans: The conversion from and to binary, octal, and hexadecimal representation plays an important part in digital computers. Since 23 = 8 and 24 = 16, each octal digit corresponds to three binary digits and each hexadecimal digit corresponds to four binary digits. view more..
+
Ans: Table 3-1 lists a few octal numbers and their representation in registers in binary-coded form. The binary code is obtained by the procedure explained above. Each octal digit is assigned a 3-bit code as specified by the entries of the first eight digits in the table view more..
+
Ans: The binary number system is the most natural system for a computer, but people are accustomed to the decimal system. One way to solve this conflict is to convert all input decimal numbers into binary numbers, let the computer perform all arithmetic operations in binary and then convert the binary results back to decimal for the human user to understand. view more..
+
Ans: Many applications of digital computers require the handling of data that consist not only of numbers, but also of the letters of the alphabet and certain special characters view more..
+
Ans: Complements are used in digital computers for simplifying the subtraction operation and for logical manipulation. There are two types of complements for each base r system: the r's complement and the (r - l)'s complement. view more..
+
Ans: The r's complement of an n-digit number N in base r is defined as r' - N for N * D and D for N = D. Comparing with the (r - I)'s complement, we note that the r's complement is obtained by adding I to the (r - I)'s complement since r' - N = [(r' - I) - N] + I. view more..
+
Ans: The direct method of subtraction taught in elementary schools uses the borrow concept. In this method we borrow a 1 from a higher significant position when the minuend digit is smaller than the corresponding subtrahend digit. view more..
+
Ans: Since we are dealing with unsigned numbers, there is really no way to get an unsigned result for the second example. view more..
+
Ans: Positive integers, including zero, can be represented as unsigned numbers. However, to represent negative integers, we need a notation for negative values. In ordinary arithmetic, a negative number is indicated by a minus sign and a positive number by a plus sign. view more..
+
Ans: When an integer binary number is positive, the sign is represented by 0 and the magnitude by a positive binary number. When the number is negative, the sign is represented by 1 but the rest of the number may be represented in one of three possible ways: view more..
+
Ans: The addition of two numbers in the signed-magnitude system follows the rules of ordinary arithmetic. If the signs are the same, we add the two magnitudes and give the sum the common sign. If the signs are different, we subtract the smaller magnitude from the larger and give the result the sign of the larger magnitude. view more..
+
Ans: Subtraction of two signed binary numbers when negative numbers are in 2' s complement form is very simple and can be stated as follows: Take the 2's complement of the subtrahend (including the sign bit) and add it to the minuend (including the sign bit). A carry out of the sign bit position is discarded. view more..
+
Ans: When two numbers of n digits each are added and the sum occupies n + 1 digits, we say that an overflow occurred. When the addition is performed with paper and pencil, an overflow is not a problem since there is no limit to the width of the page to write down the sum. view more..
+
Ans: An overflow condition can be detected by observing the carry into the sign bit position and the carry out of the sign bit position. If these two carries are not equal, an overflow condition is produced. view more..
+
Ans: The representation of decimal numbers in registers is a function of the binary code used to represent a decimal digit. A 4-bit decimal code requires four flip-flops for each decimal digit. view more..
Next Article >>
OCTAL AND HEXADECIMAL NUMBER CONVERSION -2