<<
Introduction to Protection and Security

What Is Distributed Systems

A distributed system is a collection of physically separate, possibly heterogeneous computer systems that are networked to provide the users with access to the various resources that the system maintains. Access to a shared resource increases computation speed, functionality, data availability, and reliability. Some operating systems generalize network access as a form of file access, with the details of networking contained in the network interface's device driver.

Others make users specifically invoke network functions. Generally, systems contain a mix of the two modes—for example FTP and NFS. The protocols that create a distributed system can greatly affect that system's utility and popularity. A network, in the simplest terms, is a communication path between two or more systems. Distributed systems depend on networking for their functionality. Networks vary by the protocols used, the distances between nodes, and the transport media. 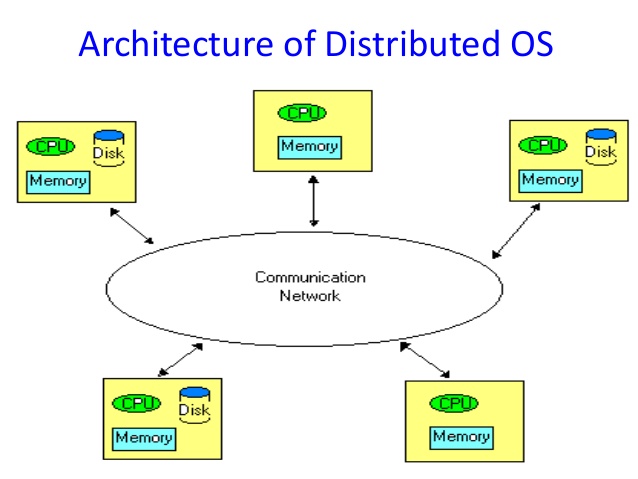 Networks are characterized based on the distances between their nodes. A local-area network (LAN) connects computers within a room, a floor, or a building. A wide-area network (WAN) usually links buildings, cities, or countries. A global company may have a WAN to connect its offices worldwide. These networks may run one protocol or several protocols. The continuing advent of new technologies brings about new forms of networks. For example, a metropolitan-area network (MAN) could link buildings within a city.

BlueTooth and 802.11 devices use wireless technology to communicate over a distance of several feet, in essence creating a small-area network such as might be found in a home. The media to carry networks are equally varied. They include copper wires, fiber strands, and wireless transmissions between satellites, microwave dishes, and radios. When computing devices are connected to cellular phones, they create a network.