One of the responsibilities of the operating system is to use the hardware efficiently. For the disk drives, meeting this responsibility entails having fast access time and large disk bandwidth. The access time has two major components.

The seek time is the time for the disk arm to move the heads to the cylinder containing the desired sector. The rotational latency is the additional time for the disk to rotate the desired sector to the disk head. The disk bandwidth is the total number of bytes transferred, divided by the total time between the first request for service and the completion of the last transfer. We can improve both the access time and the bandwidth by scheduling the servicing of disk I/O requests in a good order. Whenever a process needs I/O to or from the disk, it issues a system call to the operating system. The request specifies several pieces of information:

• Whether this operation is input or output

• What the disk address for the transfer is

• What the memory address for the transfer is

• What the number of sectors to be transferred is

If the desired disk drive and controller are available, the request can be serviced immediately. If the drive or controller is busy, any new requests for service will be placed in the queue of pending requests for that drive. For a multiprogramming system with many processes, the disk queue may often have several pending requests. Thus, when one request is completed,, the operating system chooses which pending request to service next. How does the operating system make this choice? Any one of several disk-scheduling algorithms can be used, and we discuss them next.

The simplest form of disk scheduling is, of course, the first-come, first-served (FCFS) algorithm. This algorithm is intrinsically fair, but it generally does not provide the fastest service. Consider, for example, a disk queue with requests for I/O to blocks on cylinders 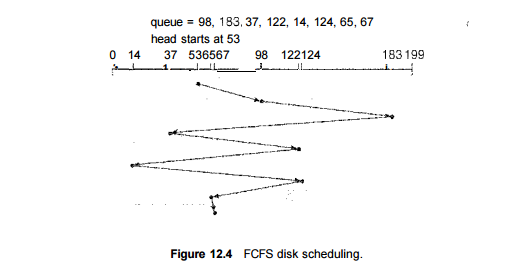 in that order. If the disk head is initially at cylinder 53, it will first move from 53 to 98, then to 183, 37, 122, 14, 124/65, and finally to 67, for a total head movement of 640 cylinders. This schedule is diagrammed in Figure 12.4. The wild swing from 122 to 14 and then back to 124 illustrates the problem with this schedule. If the requests for cylinders 37 and 14 could be serviced together, before or after the requests at 122 and 124, the total head movement could be decreased substantially, and performance could be thereby improved. 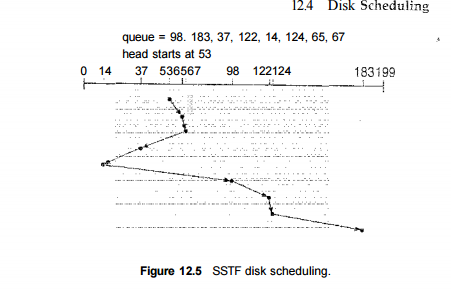 This scheduling method results in a total head movement of only 236 cylinders—little more than one-third of the distance needed for FCFS scheduling of this request queue. This algorithm gives a substantial improvement in performance. SSTF scheduling is essentially a form of shortest-job-first (SJF) scheduling; and like SJF scheduling, it may cause starvation of some requests. Remember that requests may arrive at any time. Suppose that we have two requests in the queue, for cylinders 14 and 186, and while servicing the request from 14, a new request near 14 arrives. This new request will be serviced next, making the request at 186 wait. While this request is being serviced, another request close to 14 could arrive. In theory, a continual stream of requests near one another could arrive, causing the request for cylinder 186 to wait indefinitely.

This scenario becomes increasingly likely if the pending-request queue grows long. Although the SSTF algorithm is a substantial improvement over the FCFS algorithm, it is not optimal. In the example, we can do better by moving the head from 53 to 37, even though the latter is not closest, and then to 14, before turning around to service 65, 67, 98, 122, 124, and 183. This strategy reduces the total head movement to 208 cylinders.

In the SCAN algorithm, the disk arm starts at one end of the disk and moves toward the other end, servicing requests as it reaches each cylinder, until it gets to the other end of the disk. At the other end, the direction of head movement is reversed, and servicing continues. The head continuously scans back and forth across the disk. The SCAN algorithm is sometimes called the elevator algorithm, since the disk arm behaves just like an elevator in a building, first servicing all the requests going up and then reversing to service requests the other way. Let's return to our example to illustrate. Before applying SCAN to schedule the requests on cylinders 98,183, 37,122,14, 124, 65, and 67, we need to know the direction of head movement in addition to the head's current position (53). If the disk arm is moving toward 0, the head will service 37 and then 14. At cylinder 0, the arm will reverse and will move toward the other end of the disk, servicing the requests at 65, 67, 98, 122, 124, and 183 (Figure 12.6). 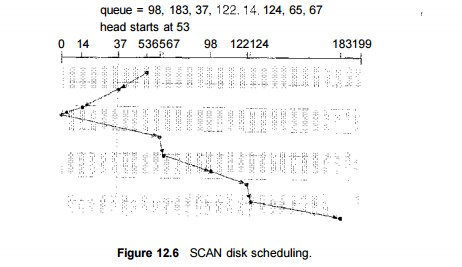 If a request arrives in the queue just in front of the head, it will be serviced almost immediately; a request arriving just behind the head will have to wait until the arm moves to the end of the disk, reverses direction, and comes back. Assuming a uniform distribution of requests for cylinders, consider the density of requests when the head reaches one end and"reverses direction. At this point, relatively few requests are immediately in front of the head, since these cylinders have recently been serviced. The heaviest density of requests is at the other end of the disk. These requests have also waited the longest, so why not go there first? That is the idea of the next algorithm.

Circular SCAN (C-SCAN) scheduling is a variant of SCAN designed to provide a more uniform wait time. Like SCAN, C-SCAN moves the head from one end of the disk to the other, servicing requests along the way. When the head reaches the other end, however, it immediately returns to the beginning of the disk, without servicing any requests on the return trip (Figure 12.7). 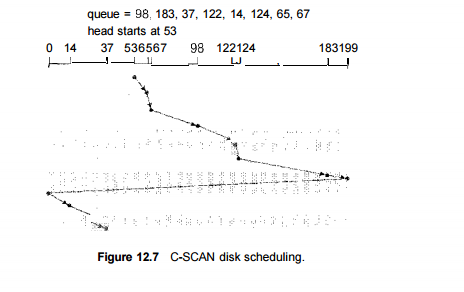 The C-SCAN scheduling algorithm essentially treats the cylinders as a circular list that wraps around from the final cylinder to the first one.

As we described them, both SCAN and C-SCAK move the disk arm across the full width of the disk. In practice, neither algorithm is often implemented this way. More commonly, the arm goes only as far as the final request in each direction. Then, it reverses direction immediately, without going all the way to the end of the disk. Versions of SCAN and C-SCAN that follow this pattern are called LOOK and C-LOOK scheduling, because they look for a request before continuing to move in a given direction (Figure 12.8). 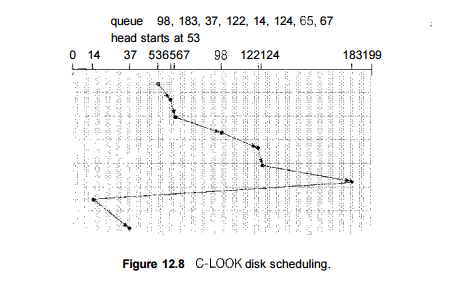 Selection of a Disk-Scheduling Algorithm

Given so many disk-scheduling algorithms, how do we choose the best one? SSTF is common and has a natural appeal because it increases performance over FCFS. SCAM and C-SCAN perform better for systems that place a heavy load on the disk, because they are less likely to cause a starvation problem.. For any particular list of requests, we can define an optimal order of retrieval, but the computation needed to find an optimal schedule may not justify the savings over SSTF or SCAN. With any scheduling algorithm, however, performance depends heavily on the number and types of requests. For instance, suppose that the queue usually has just one outstanding request.

Then, all scheduling algorithms behave the same, because they have only one choice for where to move the disk head: They all behave like FCFS scheduling. Requests for disk service can be greatly influenced by the file-allocation method. A program reading a contiguously allocated file will generate several requests that are close together on the disk, resulting in limited head movement. A linked or indexed file, in contrast, may include blocks that are widely scattered on the disk, resulting in greater head movement.

The location of directories and index blocks is also important. Since every file must be opened to be used, and opening a file requires searching the directory structure, the directories will be accessed frequently. Suppose that a directory entry is on the first cylinder and a file's data are on the final cylinder. In this case, the disk head has to move the entire width of the disk. If the directory entry were on the middle cylinder, the head would have to move, at most, one-half the width. Caching the directories and index blocks in main memory can also help to reduce the disk-arm movement, particularly for read requests.

Because of these complexities, the disk-scheduling algorithm should be written as a separate module of the operating system, so that it can be replaced with a different algorithm if necessary. Either SSTF or LOOK is a reasonable choice for the default algorithm. The scheduling algorithms described here consider only the seek distances. For modern disks, the rotational latency can be nearly as large as the average seek time. It is difficult for the operating system to schedule for improved rotational latency, though, because modern disks do not disclose the physical location of logical blocks. Disk manufacturers have been alleviating this problem by implementing disk-scheduling algorithms in the controller hardware built into the disk drive.

For instance, demand paging may take priority over application I/O, and writes are more urgent than reads if the cache is running out of free pages. Also, it may be desirable to guarantee the order of a set of disk writes to make the file system robust in the face of system crashes. Consider what could happen if the operating system allocated a disk page to a file and the application wrote data into that page before the operating system had a chance to flush the modified inode and free-space list back to disk. To accommodate such requirements, an operating system may choose to do its own disk scheduling and to spoon-feed the requests to the disk controller, one by one, for some types of F/O.