When information is stored in a computer system, we want to keep it safe from physical damage (reliability) and improper access (protection). Reliability is generally provided by duplicate copies of files. Many computers have systems programs that automatically (or through computer-operator intervention) copy disk files to tape at regular intervals (once per day or week or month) to maintain a copy should a file system be accidentally destroyed.

File systems can be damaged by hardware problems (such as errors in reading or writing), power surges or failures, head crashes, dirt, temperature extremes, and vandalism. Files may be deleted accidentally. Bugs in the file-system software can also cause file contents to be lost. Reliability is covered in more detail in Chapter 12. Protection can be provided in many ways. For a small single-user system, we might provide protection by physically removing the floppy disks and locking them in a desk drawer or file cabinet. In a multiuser system, however, other mechanisms are needed.

The need to protect files is a direct result of the ability to access files. Systems that do not permit access to the files of other users do not need protection. Thus, we could provide complete protection by prohibiting access. Alternatively, we could provide free access with no protection. Both approaches are too extreme for general use. What is needed is controlled access.

access that can be made. Access is permitted or denied depending on several factors, one of which is the type of access requested. Several different types of operations may be controlled:

• Read. Read from the file.

• Write. Write or rewrite the file.

• Execute. Load the file into memory and execute it.

• Append. Write new information at the end of the file.

• Delete. Delete the file and tree its space for possible reuse.

• List. List the name and attributes of the file. Other operations, such as renaming, copying, and editing the file, may also be controlled.

For many systems, however, these higher-level functions may be implemented by a system program that makes lower-level system calls. Protection is provided at only the lower level. For instance, copying a file may be implemented simply by a sequence of read requests. In this case, a user with read access can also cause the file to be copied, printed, and so on. Many protection mechanisms have been proposed. Each has advantages and disadvantages and must be appropriate for its intended application. A small computer system that is used by only a few members of a research group, for example, may not need the same types of protection as a large corporate computer that is used for research, finance, and personnel operations. We discuss some approaches to protection in the following sections and present a more complete treatment in Chapter 14

The most common approach to the protection problem is to make access dependent on the identity of the user. Different users may need different types of access to a. file or directory. The most general scheme to implement identitydependent access is to associate with each file and directory an access-control list (ACL) specifying user names and the types of access allowed for each user. When a user requests access to a particular file, the operating system checks the access list associated with that file. If that user is listed for the requested access, the access is allowed. Otherwise, a protection violation occurs, and the user job is denied access to the file. This approach has the advantage of enabling complex access methodologies. The main problem with access lists is their length. If we want to allow everyone to read a file, we must list all users with read access. This technique has two undesirable consequences:

• Constructing such a list may be a tedious and unrewarding task, especially if we do not know in advance the list of users in the system.

« The directory entry, previously of fixed size, now needs to be of variable size, resulting in more complicated space management.

These problems can be resolved by use of a condensed version of the afccess list. To condense the length of the access-control list, many systems recognize three classifications of users in connection with each file:

• Owner. The user who created the file is the owner.

• Group. A set of users who are sharing the file and need similar access is a group, or work group.

• Universe. All other users in the system constitute the universe. The most common recent approach is to combine access-control lists with the more general (and easier to implement) owner, group, and universe accesscontrol scheme just described. For example, Solaris 2.6 and beyond use the three categories of access by default but allow access-control lists to be added to specific files and directories when more fine-grained access control is desired. To illustrate, consider a person, Sara, who is writing a new book. She has hired three graduate students (Jim, Dawn, and Jill) to help with the project. The text of the book is kept in a file named book. The protection associated with this file is as follows:

• Sara should be able to invoke all operations on the file.

• Jim, Dawn, and Jill should be able only to read and write the file; they should not be allowed to delete the file.

• All other users should be able to read, but not write, the file. (Sara is interested in letting as many people as possible read the text so that she can obtain appropriate feedback.) To achieve such protection, we must create a new group—say, text— with members Jim, Dawn, and Jill. The name of the group, text, must then be associated with the file book, and the access rights must be set in accordance with the policy we have outlined. Now consider a visitor to whom Sara would like to grant temporary access to Chapter 1. The visitor cannot be added to the text group because that would give him access to all chapters.

Because a file can only be in one group, another group cannot be added to Chapter 1. With the addition of access-control-list functionality, the visitor can be added to the access control list of Chapter 1. For this scheme to work properly, permissions and access lists must be controlled tightly. This control can be accomplished in several ways. For example, in the UNIX system, groups can be created and modified only by the manager of the facility (or by any superuser). Thus, this control is achieved through human interaction. In the VMS system, the owner of the file can create and modify this list. Access lists are discussed further in Section 14.5.2. With the more limited protection classification, only three fields are needed to define protection. Often, each field is a collection of bits, and each bit either allows or prevents the access associated with it. For example, the UNfX system defines three fields of 3 bits each—rwx, where r controls read access, w controls write access, and x controls execution. A separate field is kept for the file owner, for the file's group, and for all other users. In this scheme, nine bits per file are needed to record protection information.

Thus, to our example, the protection fields for the file book are as follows: For the owner Sara, all bits are set; for the group text, the r and w bits are set; and for the universe, only the r bit is set. One difficulty in combining approaches comes in the user interface. Users must be able to tell when the optional ACL permissions are set on a file. In the Solaris example, a "+" appends the regular permissions, as in: 19 -rw-r—r—+ 1 jim staff 130 May 25 22:13 file l A separate set of commands, setf acl and getfacl, are used to manage the ACLs. Windows XP users typically manage access-control lists via the GUI. Figure 10.14 shows a file-permission window on Windows XP's NTFS file system. In this example, user "guest" is specifically denied access to the file 10.lex. 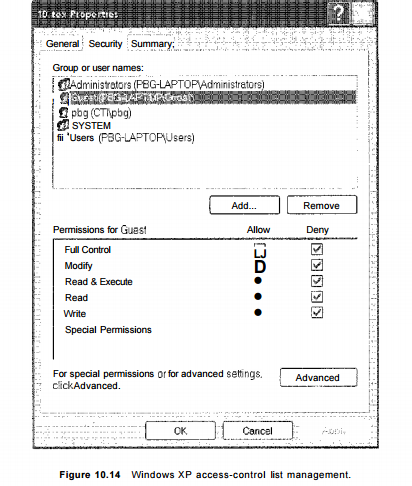 Another difficulty is assigning precedence when permission and ACLs conflict. For example, if Joe is in a file's group, which has read permission, but the file has an ACL granting Joe read and write permission, should a write by Joe be granted or denied? Solaris gives ACLs permission (as they are more fine-grained and are not assigned by default). This follows the general rule that specificity should have priority. 10.6.3 Other Protection Approache s Another approach to the protection problem is to associate a password with each file. Just as access to the computer system is often controlled by a password, access to each file can be controlled in the same way. If the passwords are chosen randomly and changed often, this scheme may be effective in limiting access to a file.

The use of passwords has a few disadvantages, however. First, the number of passwords that a user needs to remember may become large, making the scheme impractical. Second, if only one password is used for all the files, then once it is discovered, all files are accessible; protection is on an all-or-none basis. Some systems (for example, TOPS-20) allow a user to associate a password with a subdirectory, rather than with an individual file, to deal with this problem. The IBMVM/CMS operating system allows three passwords for a minidisk—one each for read, write, and multiwrite access.

Some single-user operating systems—such as MS-DOS and earlier versions of the Macintosh operating system prior to Mac OS X—provide little in terms of file protection. In scenarios where these older systems are now being placed on networks where file sharing and communication are necessary, protection mechanisms must be retrofitted into them.

Designing a feature for a new operating system is almost always easier than adding a feature to an existing one. Such updates are usually less effective and are not seamless. In a multilevel directory structure, we need to protect not only individual files but also collections of files in subdirectories; that is, we need to provide a mechanism for directory protection. The directory operations that must be protected are somewhat different from the file operations. We want to control the creation and deletion of files in a directory. 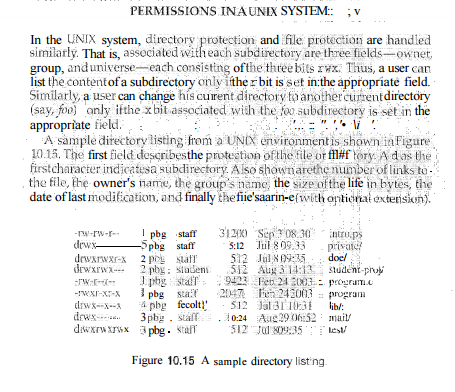 In addition, we probably want to control whether a user can determine the existence of a file in a directory. Sometimes, knowledge of the existence and name of a file is significant in itself. Thus, listing the contents of a directory must be a protected operation. Similarly, if a path name refers to a file in a directory, the user must be allowed access to both the directory and the file. In systems where files may have numerous path names (such as acyclic or general graphs), a given user may have different access rights to a particular file, depending on the path name used.