We turn next to a description of the scheduling policies of the Solaris, Windows XP, and Linux operating systems. It is important to remember that we are describing the scheduling of kernel threads with Solaris and Linux. Recall that Linux does not distinguish between processes and threads; thus, we use the term task when discussing the Linux scheduler.

Solaris Scheduling Solaris uses priority-based thread scheduling. It has defined four classes of scheduling, which are, in order of priority:

3. Interactive Within each class there are different priorities and different scheduling algorithms. Solaris scheduling is illustrated in Figure 5.10. 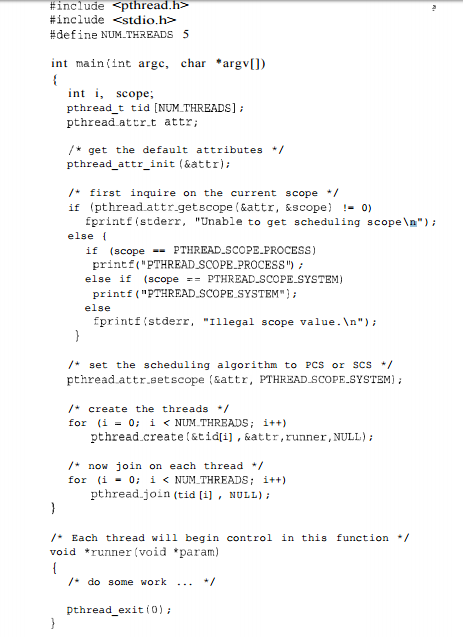 The default scheduling class for a process is time sharing. The scheduling policy for time sharing dynamically alters priorities and assigns time slices of different lengths using a multilevel feedback queue. By default, there is an inverse relationship between priorities and time slices: The higher the priority, the smaller the time slice; and the lower the priority, the larger the time slice. Interactive processes typically have a higher priority; 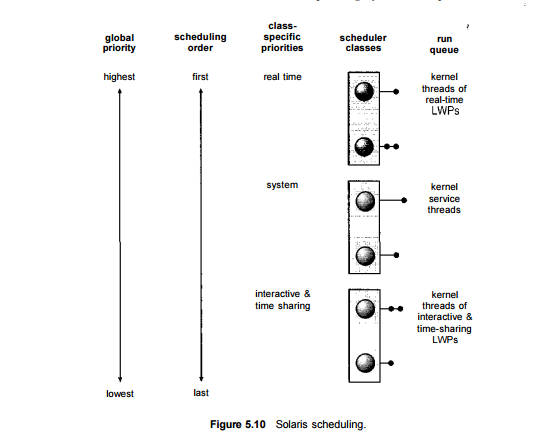 The dispatch table shown in Figure 5.11 contains the following fields:

• Priority. The class-dependent priority for the time-sharing and interactive classes. A higher number indicates a higher priority.

• Time quantum. The time quantum for the associated priority. This illustrates the inverse relationship between priorities and time quanta: 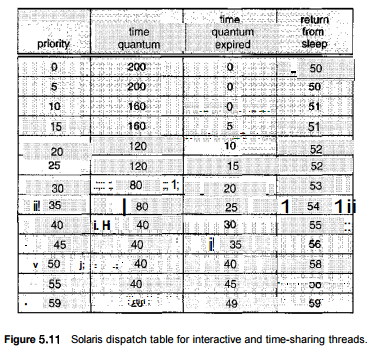 As the table illustrates, when I/O is available for a waiting thread, its priority is boosted to between 50 and 59, thus supporting the scheduling policy of providing good response time for interactive processes. Solaris 9 introduced two new scheduling classes: fixed priority and fair share. Threads in the fixed-priority class have the same priority range as those in the time-sharing class; however, their priorities are not dynamically adjusted. The fair-share scheduling class uses CPU shares instead of priorities to make scheduling decisions. CPU shares indicate entitlement to available CPU resources and are allocated to a set of processes (known as a project).

Solaris uses the system class to run kernel processes, such as the scheduler and paging daemon. Once established, the priority of a system process does not change. The system class is reserved for kernel use (user processes running in kernel mode are not in the systems class).

Threads in the real-time class are given the highest priority. This assignment allows a real-time process to have a guaranteed response from the system within a bounded period of time. A real-time process will run before a process in any other class. In general, however, few processes belong to the real-time class. Each scheduling class includes a set of priorities. However, the scheduler converts the class-specific priorities into global priorities and selects the thread with the highest global priority to run. The selected thread runs on the CPU until it (1) blocks, (2) uses its time slice, or (3) is preempted by a higher-priority thread. If there are multiple threads with the same priority, the scheduler uses a round-robin queue. As mentioned, Solaris has traditionally used the manyto-many model (4.2.3) but with Solaris 9 switched to the one-to-one model (4.2.2).

Windows XP schedules threads using a priority-based, preemptive scheduling algorithm. The Windows XP scheduler ensures that the highest-priority thread will always run. The portion of the Windows XP kernel that handles scheduling is called the dispatcher. A thread selected to run by the dispatcher will run until it is preempted by a higher-priority thread, until it terminates, until its time quantum ends, or until it calls a blocking system call, such as for I/O. If a higher-priority real-time thread becomes ready while a lower-priority thread is running, the lower-priority thread will be preempted. This preemption gives a real-time thread preferential access to the CPU when the thread needs such access. The dispatcher uses a 32-level priority scheme to determine the order of thread execution. Priorities are divided into two classes.

The variable class contains threads having priorities from 1 to 15, and the real-time class contains threads with priorities ranging from 16 to 31. (There is also a thread running at priority 0 that is used for memory management.) The dispatcher uses a queue for each scheduling priority and traverses the set of queues from highest to lowest until it finds a thread that is ready to run. If no ready thread is found, the dispatcher will execute a special thread called the idle thread. There is a relationship between the numeric priorities of the Windows XP kernel and the Win32 API. The Win32 API identifies several priority classes to which a process can belong. These include:

The priority is never lowered below the base priority, however. Lowering the thread's priority tends to limit the CPU consumption of compute-bound threads. When a variable-priority thread is released from a wait operation, the dispatcher boosts the priority. The amount of the boost depends on what the thread was waiting for; for example, a thread that was waiting for keyboard I/O would get a large increase, whereas a thread waiting for a disk operation would get a moderate one. This strategy tends to give good response times to interactive threads that are using the mouse and windows. It also enables I/O-bound threads to keep the I/O devices busy while permitting compute-bound threads to use spare CPU cycles in the background.

This strategy is used by several time-sharing operating systems, including UNIX. In addition, the window with which the user is currently interacting receives a priority boost to enhance its response time. When a user is running an interactive program, the system needs to provide especially good performance for that process. For this reason, Windows XP has a special scheduling rule for processes in the NORMAL_PR1ORITY_CLASS. Windows XP distinguishes between the foreground process that is currently selected on the screen and the background processes that are not currently selected. When a process moves into the foreground, Windows XP increases the scheduling quantum by some factor—typically by 3. This increase gives the foreground process three times longer to run before a time-sharing preemption occurs. 5.6.3 Example: Linux Scheduling Prior to version 2.5, the Linux kernel ran a variation of the traditional UNIX scheduling algorithm.

Two problems with the traditional UNIX scheduler are that it does not provide adequate support for SMP systems and that it does not scale well as the number of tasks on the system grows. With version 2.5, the scheduler was overhauled, and the kernel now provides a scheduling algorithm that runs in constant time—known as O(l)—regardless of the number of tasks on the system. The new scheduler also provides increased support for SMP, including processor affinity and load balancing, as well as providing fairness and support for interactive tasks. The Linux scheduler is a preemptive, priority-based algorithm with two separate priority ranges: a real-time range from 0 to 99 and a nice value ranging from 100 to 140. These two ranges map into a global priority scheme whereby numerically lower values indicate higher priorities. Unlike schedulers for many other systems, including Solaris (5.6.1) and Windows XP (5.6.2), Linux assigns higher-priority tasks longer time quanta and lower-priority tasks shorter time quanta. The relationship between priorities and time-slice length is shown in Figure 5.13. 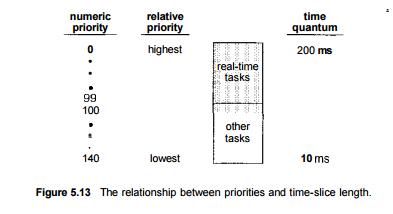 A runnable task is considered eligible for execution on the CPU as long as it has time remaining in its time slice. When a task has exhausted its time slice, it is considered expired and is not eligible for execution again until all other tasks have also exhausted their time quanta. The kernel maintains a list of all runnable tasks in a runqueue data structure. Because of its support for SMP, each processor maintains its own runqueue and schedules itself independently. Each runqueue contains two priority arrays—active and expired. The active array contains all tasks with time remaining in their time slices, and the expired array contains all expired tasks.

Each of these priority arrays contains a list of tasks indexed according to priority (Figure 5.14). 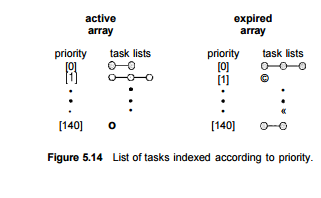 The scheduler chooses the task with the highest priority from the active array for execution on the CPU. On multiprocessor machines, this means that each processor is scheduling the highest-priority task from its own runqueue structure. When all tasks have exhausted their time slices (that is, the active array is empty), the two priority arrays are exchanged; the expired array becomes the active array, and vice versa. Linux implements real-time scheduling as defined by POSIX.lb, which is fully described in Section 5.5.2. Real-time tasks are assigned static priorities. All other tasks have dynamic priorities that are based on their nice values plus or minus the value 5. The interactivity of a task determines whether the value 5 will be added to or subtracted from the nice value. A task's interactivity is determined by how long it has been sleeping while waiting for I/O. Tasks that are more interactive typically have longer sleep times and therefore are more likely to have adjustments closer to -5, as the scheduler favors interactive tasks. The result of such adjtistments will be higher priorities for these tasks. Conversely, tasks with shorter sleep times are often more CPU-bound and thus will have their priorities lowered. The recalculation of a task's dynamic priority occurs when the task has exhausted its time quantum and is to be moved to the expired array. Thus, when the two arrays are exchanged, all tasks in the new active array have been assigned new priorities and corresponding time slices.