Structure In this section we present a general overview of the physical structure of secondary and tertiary storage devices. 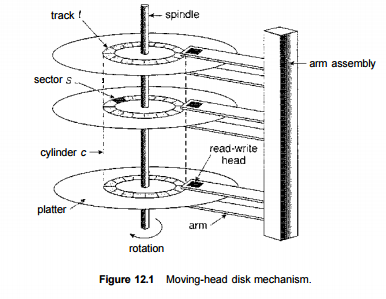 A read-write head "flies" just above each surface of every platter. The heads are attached to a disk arm that moves all the heads as a unit. The surface of a platter is logically divided into circular tracks, which are subdivided into sectors. The set of tracks that are at one arm position makes up a cylinder. There may be thousands of concentric cylinders in a disk drive, and each track may contain hundreds of sectors. The storage capacity of common disk drives is measured in gigabytes.

When the disk is in use, a drive motor spins it at high speed. Most drives rotate 60 to 200 times per second. Disk speed has two parts. The transfer rate is the rate at which data flow between the drive and the computer. The positioning time, sometimes called the random-access time, consists of the time to move the disk arm to the desired cylinder, called the seek time, and the time for the desired sector to rotate to the disk head, called the rotational latency.

Typical disks can transfer several megabytes of data per second, and they have seek times and rotational latencies of several milliseconds. Because the disk head flies on an extremely thin cushion of air (measured in microns), there is a danger that the head will make contact with the disk surface. Although the disk platters are coated with a thin protective layer, sometimes the head will damage the magnetic surface. This accident is called a head crash.

A head crash normally cannot be repaired; the entire disk must be replaced. A disk can be removable, allowing different disks to be mounted as needed. Removable magnetic disks generally consist of one platter, held in a plastic case to prevent damage while not in the disk drive. Floppy disks are inexpensive removable magnetic disks that have a soft plastic case containing a flexible platter. The head of a floppy-disk drive generally sits directly on the disk surface, so the drive is designed to rotate more slowly than a hard-disk drive to reduce the wear on the disk surface.

The storage capacity of a floppy disk is typically only 1.44 MB or so. Removable disks are available that work much like normal hard disks and have capacities measured in gigabytes. A disk drive is attached to a computer by a set of wires called an I/O bus. Several kinds of buses are available, including enhanced integrated drive electronics (EIDE), advanced technology attachment (ATA), serial ATA (SATA), universal serial bus (USB), fiber channel (FC), and SCSI buses. The data transfers on a bus are carried out by special electronic processors called controllers. The host controller is the controller at the computer end of the bus. A disk controller is built into each disk drive. To perform a disk I/O operation, the computer places a command into the host controller, typically using memory-mapped I/O ports, as described in Section 9.7.3. The host controller then sends the command via messages to the disk controller, and the disk controller operates the disk-drive hardware to carry out the command. Disk controllers usually have a built-in cache. Data transfer at the disk drive happens between the cache and the disk surface, and data transfer to the host, at fast electronic speeds, occurs betwr een the cache and the host controller.

Magnetic tape was used as an early secondary-storage medium. Although it is relatively permanent and can hold large quantities of data, its access time is slow compared with that of main memory and magnetic disk. In addition, random access to magnetic tape is about a thousand times slower than random access to magnetic disk, so tapes are not very useful for secondary storage. Tapes are used mainly for backup, for storage of infrequently used information, and as a medium for transferring information from one system to another.

A tape is kept in a spool and is wound or rewound past a read-write head. Moving to the correct spot on a tape can take minutes, but once positioned, tape drives can write data at speeds comparable to disk drives. Tape capacities vary greatly, depending on the particular kind of tape drive. Typically, they store from 20 GB to 200 GB. Some have built-in compression that can more than double the effective storage. Tapes and their drivers are usually categorized by width, including 4, 8, and 19 millimeters and 1/4 and 1/2 inch. Some are named according to technology, such as LTO-2 and SDLT. Tape storage is further described in Section 12.9.