The objective of multiprogramming is to have some process running at all times, to maximize CPU utilization. The objective of time sharing is to switch the CPU among processes so  frequently that users can interact with each program while it is running. To meet these objectives, the process scheduler selects an available process (possibly from a set of several available processes) for program execution on the CPU. For a single-processor system, there will never be more than one running process. If there are more processes, the rest will
have to wait until the CPU is free and can be rescheduled.

As processes enter the system, they are put into a job queue, which consists of all processes in the system. The processes that are residing in main memory and are ready and waiting to execute are kept on a list called the ready queue. This queue is generally stored as a linked list. A ready-queue header contains pointers to the first and final PCBs in the list. Each PCB includes a pointer field that points to the next PCB in the ready queue. The system also includes other queues. When a process is allocated the CPU, it executes for a while and eventually quits, is interrupted, or waits for the occurrence of a particular event, such as the completion of an I/O request.

PROCESS REPRESENTATION IN LINUX
The process control block in the Linux operating system is represented by the C structure task_strtict. This structure contains all the necessary information for 'representing a process, including the state of the process, scheduling and memory management information, list of open files, and pointers to the process's parent and any of its children. (A process's parent is
the process that created it; its children are any processes that it creates.) Some of these fields include:

For example, the state of a process is represented by the field long state in this structure. Within the Linux kernel, all active processes are represented using a doubly linked list of task_struct, and the kernel maintains a pointer — current — to the process currently executing on the system. This is shown in Figure 3.5.

As an illustration of how the kernel might manipulate one of the fields in the task_struct for a specified process, let's assume the system would like to change the state of the process currently running to the value new .state.
If current is a pointer to the process currently executing, its state is changed with the following:

Suppose the process makes an I/O request to a shared device, such as a disk. Since there are many processes in the system, the disk may be busy with the I/O request of some other process. The process therefore may have to wait for the disk. The list of processes waiting for a particular I/O device is called  device queue. Each device has its own device queue (Figure 3.6). 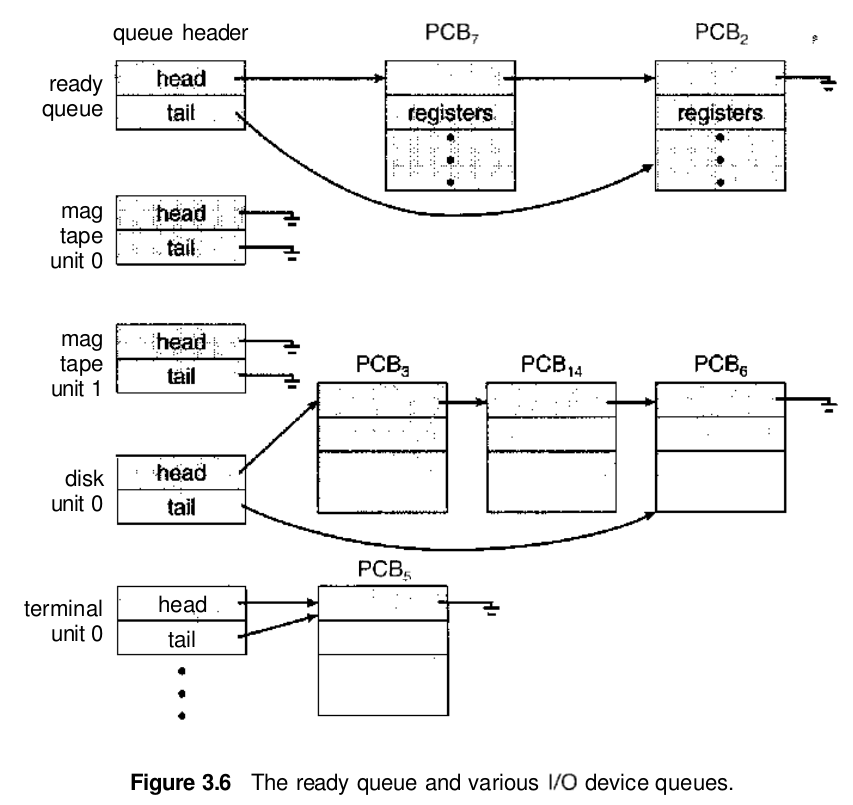 A common representation for a discussion of process scheduling is a queueing diagram, such as that in Figure 3.7. 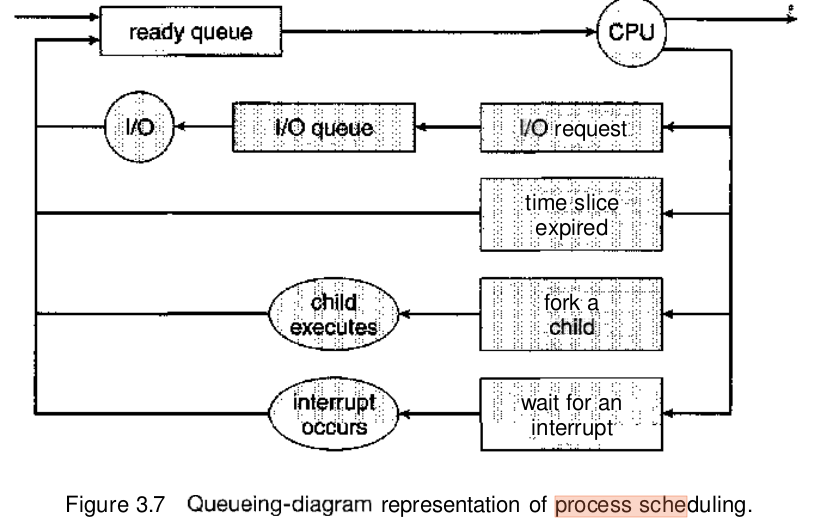 Each rectangular box represents a queue. Two types of queues are present: the ready queue and a set of device queues. The circles represent the resources that serve the queues, and the arrows indicate the flow of processes in the system.
A new process is initially put in the ready queue. It waits there tmtil it is selected for execution, or is dispatched. Once the process is allocated the CPU and is executing, one of several events could occur:
• The process could issue an I/O request and then be placed in an I/O queue.
• The process could create a new subprocess and wait for the subprocess's termination.
• The process could be removed forcibly from the CPU, as a result of an interrupt, and be put back in the ready queue.
In the first two cases, the process eventually switches from the waiting state to the ready state and is then put back in the ready queue. A process continues this cycle until it terminates, at which time it is removed from all queues and has its PCB and resources deallocated.

On some systems, the long-term scheduler may be absent or minimal. For example, time-sharing systems such as UNIX and Microsoft Windows systems often have no long-term scheduler but simply put every new process in memory for the short-term scheduler. The stability of these systems depends either on a physical limitation (such as the number of available terminals) or on the self-adjusting nature of human users. If the performance declines to unacceptable levels on a multiuser system, some users will simply quit. Some operating systems, such as time-sharing systems, may introduce an additional, intermediate level of scheduling. This medium-term scheduler is diagrammed in Figure 3.8.

The key idea behind a medium-term scheduler is that sometimes it can be advantageous to remove processes from memory (and from active contention for the CPU) and thus reduce the degree of multiprogramming. Later, the process can be reintroduced into memory, and its execution can be continued where it left off. This scheme is called swapping. The process is swapped out, and is later swapped in, by the medium-term scheduler. Swapping may be necessary to improve the process mix or because a change in memory requirements has overcommitted available memory, requiring memory to be freed up.

As mentioned, interrupts cause the operating system to change a CPU from its current task and to run a kernel routine. Such operations happen frequently on general-purpose systems. When an interrupt occurs, the system needs to save the current context of the process currently running on the CPU so that it can restore that context when its processing is done, essentially suspending the process and then resuming it. The context is represented in the PCB of the process; it includes the value of the CPU registers, the process state, and memory-management information. Generically, we perform a state save of the current state of the CPU, be it in kernel or user mode, and then a state restore to resume operations. Switching the CPU to another process requires performing a stat^ save of the current process and a state restore of a different process.

This task is known as a context switch. When a context switch occurs, the kernel saves the context of the old process in its PCB and loads the saved context of the new process scheduled to run. Context-switch time is pure overhead, because the system does no useful work while switching. Its speed varies from machine to machine, depending on the memory speed, the number of registers that must be copied, and the existence of special instructions (such as a single instruction to load or store all registers). Typical speeds are a few milliseconds. Context-switch times are highly dependent on hardware support. For instance, some processors (such as the Sun UltraSPARC) provide multiple sets of registers.

A context switch here simply requires changing the pointer to the current register set. Of course, if there are more active processes than there are register sets, the system resorts to copying register data to and from memory, as before. Also, the more complex the operating system, the more work must be done during a context switch. As we will see in Chapter 8, advanced memory-management techniques may require extra data to be switched with each context. For instance, the address space of the current process must be preserved as the space of the next task is prepared for use. How the address space is preserved, and what amount of work is needed to preserve it, depend on the memory-management method of the operating system.